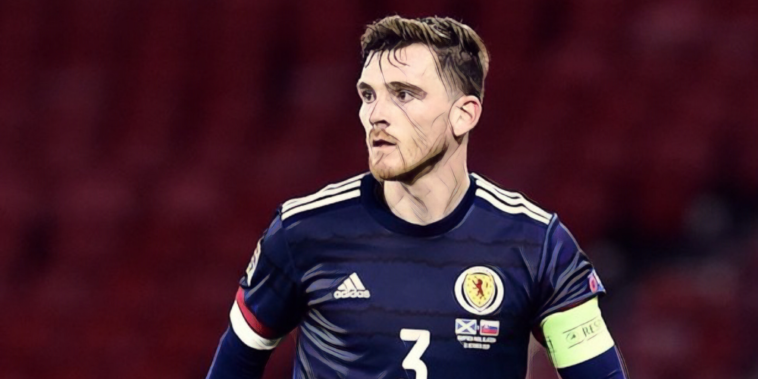 Andy Robertson says Scotland are ready to go ‘all guns blazing’ ahead of their Euro 2020 opener against the Czech Republic.

Scotland face the Czech Republic in their opening group fixture on Monday in what will be the nation’s first major tournament fixture since 1998, with Steve Clarke’s side beginning the tournament with a ‘home’ fixture at Hampden Park.

Robertson has now issued a rallying cry to his side ahead of the clash and has called for Scotland to be ‘calm’ and ‘ready’, before going ‘all guns blazing’ in their opening fixture.

“It’s important to stay calm, composed and ready — and then go all guns blazing into the game,” he told a press conference.

“There have been chats, conversations where myself and the gaffer have both spoken. I’m not sure it’s needed on the eve of the game.

“I look around the squad and I see boys who are ready. We will meet tonight again and I’m sure there will be words. But I already know the players are up for this. We are good to go.”

Robertson also opened up on the support of a home crowd in Glasgow and says Scotland are determined to prove they are not at Euro 2020 just to ‘make up the numbers’.

“I would have loved it to be a full house. But obviously what’s going on in the world just now isn’t allowing it,” he said. “But to have 12,000 in will be great. To have some of our family in will be even better.

“We’ve always said we’re not here to make up the numbers. We’re not just happy to be in the tournament, we want to do well in it.

“We have a tough group and it will be hard. But it has to be our aim to get out of the group — which no one (Scotland team) has done before. If we can do that, we are writing our own history.”

Read Also – Luka Modric: Will Euro2020 be the Last Dance of a modern great