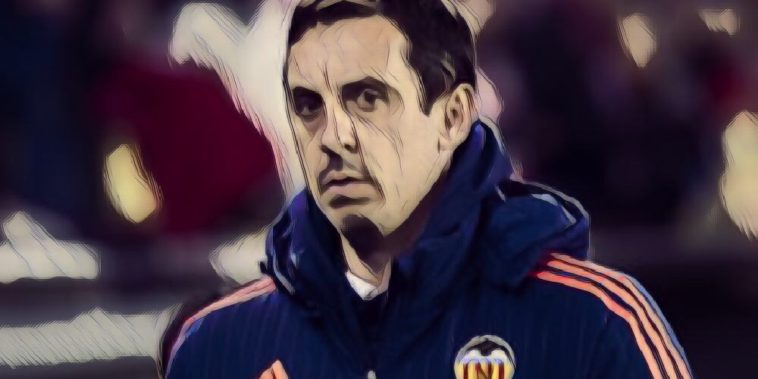 Gary Neville talked about what he got wrong during his short but spectacularly disastrous spell in management at Valencia three years ago.

In a recent interview, Neville talked about how he went about the job at hand upon arriving at Valencia, what challenges were in front of him, and what mistakes he made along the way.

“There was a couple of players there I should have moved out of the club, which would have established a bit of authority to them,” he told the Blank Podcast.

“‘Hang on he has got some power to do something here. He’s in for five months but if we don’t play ball he can damage us.’

“What I tried to do was pick up a rocky ship and just drift into shore rather than really grab the reins, have a strong leadership with me and also make sure that I got rid of what would be people who were making it choppy. I made some mistakes and they were all mine.

“I couldn’t communicate with the players and the club was difficult but they were excuses.

“I knew I couldn’t communicate with the players and I knew the club was difficult, I knew the dressing room was divided, I knew it was a difficult time in the club, I knew they’d sacked 15 managers in 13 years. I knew I was going to get criticised.”

Neville admitted he had never intended to get into management in the first place, that taking the job in Spain was not part of his plan, and referred to some of his decisions at the club as ‘naive’.

“I’d turned down jobs in the Premier League and Championship and said to myself I wasn’t going to be a manager,” he continued.

“When I finished my playing career I said I’d follow three paths; broadcast, the businesses I’m involved with and coaching.

“Actually I should never really have pursued the coaching and you have to really immerse yourself in that every second of every day. But I thought I’ll get my badges as I love football.

“Then Roy [Hodgson] rang me up and said would you be part of my coaching staff [for England] and because it enabled me to continue my broadcasting and my business career I thought ‘actually this fits’. It was a part-time role with England.

“I had a four-year plan and four-year contracts with England and Sky. I was six months away from the end of that plan when my business partner who owns Valencia Football Club, who were having a really bad season, said, ‘can you just take it for me until the end of the season?’

“It’s the only thing I’ve never planned… and I said yes. I kick myself to this day, not for saying yes, but for the mistakes that I made. They were stupid mistakes.

“Not taking over an experienced staff with me that spoke English and Spanish was a bad mistake, it was naive.”