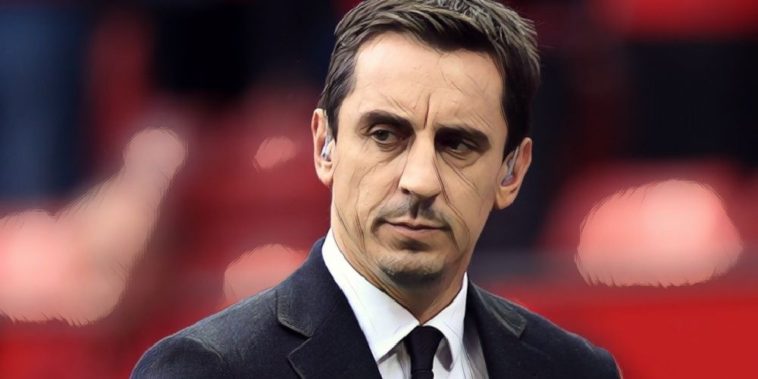 Gary Neville has explained why he believes Fenway Sports Group’s sale of Liverpool ‘makes sense’ and thinks the Glazer family could follow suit at Manchester United.

FSG have confirmed that the group are open to proposals for new shareholders at Liverpool, releasing a statement in which the Americans revealed they are prepared to consider proposals from interested parties if in the best interests of the club.

FSG – who are claimed to want more than £3 billion -have spent more than a decade in power, in which the group have redeveloped Anfield and overseen a period of silverware success under Jurgen Klopp.

Neville believes there is an acceptance that FSG cannot compete with the finances of rival Premier League sides and said this might be the right time to cash in and move on. He added that the much loathed Glazer family – the controversial owners of Manchester United – could follow suit.

“It absolutely makes sense,” Neville said on The Overlap.

“They haven’t got the money really, FSG, to compete with the other teams in the league. They’ve developed the stadium, they’ve got Jurgen Klopp at a point whereby, how long is he going to be around for? Is it two years, is it three years?

“If that Chelsea valuation, which at this moment in time sets the standard for valuations, they’re thinking now is the time potentially for us to get out because if we dip down the league, if people think ‘hang on a minute, Boehly’s overpaid at Chelsea’, and it becomes a bit more of a struggle in the next couple of years, they’re probably thinking now is the right time.

“And I think the Glazer family will be in a similar situation. I suspect both of them will be looking for ‘outs’ or ‘part-outs’.

“The Glazer family, I think there’s a couple of them that want to stay in, but with FSG, they I think put a £3-4bn valuation on Liverpool when they raised some money coming out of Covid. That’s where they put the valuation at.

“They could probably get that at this moment in time, they might not be able to get that in two or three years. And they certainly can’t compete financially with some of the other clubs in the league. So I think it’s not as big a surprise when you look at some of the evidence surrounding it.”