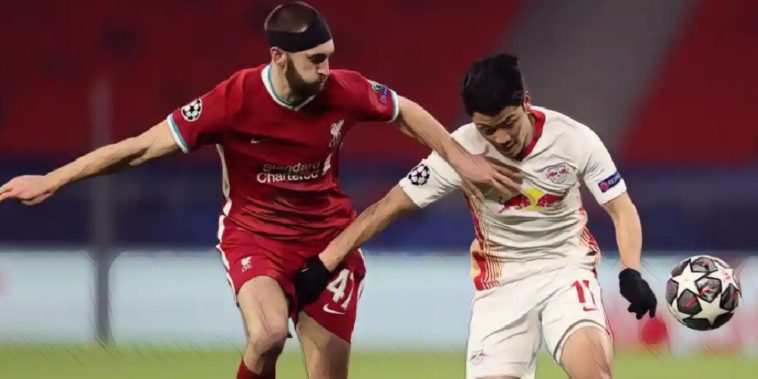 Liverpool defender Nat Phillips insists he still has a long way to go to earn the right to play for the club on a regular basis despite impressing on his Champions League debut.

Liverpool’s defensive issues have been well documented this season, with all three recognised senior centre-backs – Virgil van Dijk, Joe Gomez and Joel Matip – having been ruled out for the remainder of the season.

That has left Jurgen Klopp with somewhat of a juggling act at the back, with the German having utilised 18 different combinations in the centre of defence, a stat that would likely go a long way to explaining their huge drop off in results compared to last season’s dominant title-winning campaign.

Liverpool progressed to the last eight of the Champions League in midweek with a 4-0 aggregate win over RB Leipzig, and despite Julian Nagelsmann’s side needing to score three times in the second leg, they were actually offered very little in front of goal, with Phillips earning plenty of praise for his performance on what was his European debut.

“It was an unbelievable experience and I want to continue to keep having those moments,” the 23-year-old said, as per the Guardian. “Obviously, to be able to do that then I have to be competing at a very high level in my career.

“I would say it is important to me that it does not become the biggest occasion or best game that I have ever played in. It would be sad if I go on with the rest of my career and it is already peaked. That would be a shame.

“I try not to think about it too much because you can tie yourself in knots thinking about these things. My thought process is take things day by day, game by game, and try and improve. If you do that you should get your rewards.”

The Bolton-born defender spent last season on loan with German second-tier side, Stuttgart, and has since made nine Premier League appearances since his return to Anfield.

Despite his commanding performance over in Budapest in midweek, the 23-year-old insists he has ‘plenty more to do to earn that right’ to feature for the club on a regular basis when the defence is back up to full strength.

“Premier League football, over the last year, was something I saw as an ambition,” he said. “I was asked about Champions League football earlier in the season. Not many players get the chance to experience it and you have to earn that right. I haven’t played many games in the Premier League – I can count them on both hands – and I wouldn’t say I have earned that right. Circumstances have dictated it but I still have plenty more to do to earn that right.

“My ambitions are always changing. If you had asked me at the start of the season if I thought I was capable of playing in the Premier League I would have said yes. But whether it was for Liverpool, I wasn’t sure. The demands at Liverpool are so much higher. But I have always felt I would be able to play in a Premier League game and do a job. That’s just the way I have approached it – and continue to. I don’t look too far ahead. I just crack on with working on myself and improving the things that I can get better at to get to where I want to get to.”