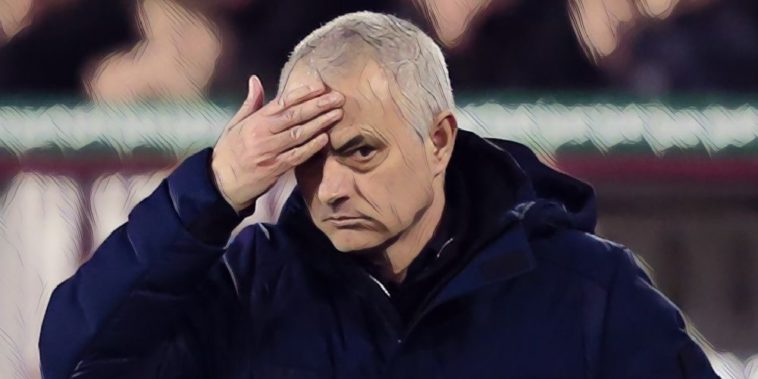 Jose Mourinho has seen the pressure rise on his position as Tottenham manager following an indifferent period of form for the north London side, dropping to ninth in the Premier League after picking up just 12 points from their past 12 fixtures.

League leaders as recently as mid-December, the feel-good factor that surrounded the club’s strong start has all but disappeared following an alarming run of results that has raised further questions regarding Mourinho’s management and methods.

One of the most successful coaches of his generation and once hailed as a managerial mastermind, has the Portuguese tactician fallen behind when it comes to his modern coaching contemporaries?

Here is how Mourinho’s points return compares after 50 games at every club:

Mourinho shot to prominence during an incredible period of success at Porto, arriving at the Portuguese giants after shining during a brief spell in charge of União de Leiria, following a false-start to his managerial career at Benfica.

Fifth at the time of his arrival, Porto embarked on a strong run of form as the new head coach made an immediate impact to finish third and secure qualification to the UEFA Cup, a competition they would win as part of a historic treble during Mourinho’s first full season in charge.

Porto lost just two games all season to be crowned as Portuguese champions, before retaining the title and shocking European football with a shock Champions League triumph in 2003/04.

Roman Abramovich’s billionaire takeover of Chelsea saw major changes at the west London side, with Claudio Ranieri dismissed despite guiding the Blues to a runners-up finish and the Champions League semi-finals.

A new dawn needed a new face and in came Mourinho ahead of the 2004/05 campaign, the fresh-faced Portuguese tactician arriving after guiding unfancied Porto to success on Europe’s biggest stage.

Mourinho infamously declared himself the ‘Special One’ upon arrival and delivered on that grand statement, ending Chelsea’s 50-year wait for a league title during his debut season, a campaign in which the club conceded a Premier League record low of just 15 goals.

Chelsea retained the title the following season to cement their status as England’s dominant force, Mourinho winning a huge 126 points over his first 50 games in charge as a new era of success was ushered in at Stamford Bridge.

Mourinho’s spell at Chelsea lasted just over three seasons before his departure in acrimonious circumstances, returning to top-level management at Inter Milan in 2008.

He spent just two seasons with the Nerazzurri and guided them to the league title in the club’s centenary season, before overseeing the greatest season in Italian football history as Inter won a historic treble.

Inter won the league, Italian Cup and Champions League during an incredible 2009/10 campaign, victory over Bayern Munich seeing the club crowned champions of Europe for the first time in 45 years.

Mourinho walked away from the club to join Real Madrid that summer, having amassed 113 points from his opening 50 league games in charge.

The glitz, glamour and huge pressure of the Real Madrid hot-seat next called for Mourinho, taking charge of the capital club as they looked to compete with the threat of a formidable Barcelona side under the guidance of a young Pep Guardiola.

Mourinho’s side finished as runners-up during his debut season despite amassing a huge 92 points, before a record-breaking 2011/12 followed as Real became the first Spanish side in history to reach 100 league points – setting numerous records including most goals scored (121), biggest goal difference (+89) and most away wins (16).

As so often has been the case, however, Mourinho’s third season fell short of previous exploits as Real finished 15 points adrift of champions Barcelona, bringing an end to his reign at the Bernabeu.

His spell in Spain saw him compile 123 points from his opening 50 league games, whilst his 71.91% win percentage across his time with Los Blancos was the highest figure of any of his clubs.

Mourinho returned for a second spell at Chelsea in 2013, a reign that saw him earn 114 points from his opening 50 league games during a period of huge highs and notable lows.

There were silverware successes with a League Cup and Premier League double in 2014/15, securing his third Premier League crown as summer signings Diego Costa and Cesc Fabregas transformed the west London side.

The following season saw him once again leave the club by ‘mutual consent’ with Chelsea languishing near the Premier League’s relegation places, the Blues 16th at the time of his December exit in one of the division’s worst-ever title defences.

Manchester United had previously courted Mourinho as they looked for the right succession plan post-Sir Alex Ferguson, and after the disappointing spells of David Moyes and Louis van Gaal secured their man ahead of the 2016/17 season.

His first season brought double silverware as the Red Devils won the League Cup and Europa League, though their domestic form was disappointing as the club stuttered to a sixth-placed finish in the Premier League.

The following campaign saw Manchester United finish runners-up in a season Mourinho memorably described as one of his ‘best achievements’ despite finishing a huge 18 points adrift of champions Manchester City.

Mourinho’s comments referred to trouble behind the scenes and his spell lasted only months longer before he was sacked following a poor start to the 2017/18 campaign.

Mourinho’s latest venture has seen him take charge of a Tottenham side looking to end their long wait for major silverware, having won just one major trophy since the turn of the millennium and none within the past decade.

The Portuguese’s previous successes point towards a coach capable of turning Spurs into challengers, though there are huge doubts following the north London side’s inconsistencies with Mourinho’s defence-first mentality heavily criticised.

The aesthetically pleased styles of Pep Guardiola, Jurgen Klopp and even predecessor Mauricio Pochettino have led to many questioning whether Mourinho is yesterday’s man, his methods outdated in comparison to his modern managerial peers.

Mourinho’s 81 points from his first 50 games is the lowest he has managed at any of his former clubs, and whilst an impending Carabao Cup final provides a chance to silence doubters it remains to be seen whether success in that competition will be suffice for a frustrated fanbase watching football without both style and substance at present.

Read Also – Olé! The five players with the most nutmegs in Europe’s top five leagues