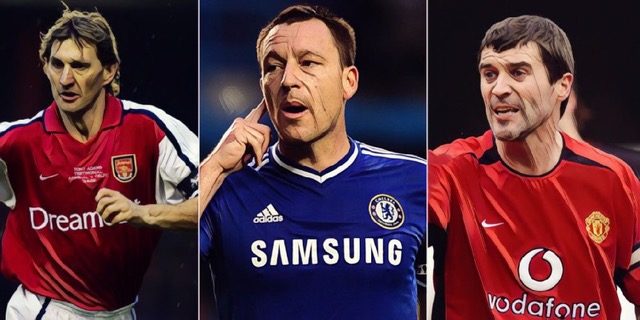 The Premier League has seen some great captains play their part in title-winning teams, a series of inspirational leaders for the finest sides the division has witnessed.

Throughout the Premier League’s near three decade existence there have only been 13 winning captains, however, whilst only seven players have managed to captain their side to more than one title triumph.

We’ve decided to take a look at the most successful skippers in Premier League history, here are the rankings of every player to captain his side to multiple league titles:

One of the cornerstones of the Manchester United sides which dominated the early seasons of the newly formed Premier League, Bruce played a crucial part in the club’s drought-breaking title success during the division’s inaugural season.

The centre-back had captained the side for much of that campaign but was named as official club captain on a permanent basis following the departure of Bryan Robson, leading Sir Alex Ferguson’s side to further championships in 1993/94 and 1995/96.

Bruce’s success saw him become the first player to captain a side to two Premier League titles, whilst United also claimed the FA Cup in each campaign to become the first team to win two domestic doubles.

The second player to captain his side to multiple Premier League titles, Tony Adams was the leader of the Arsenal side which completed domestic doubles in both 1997/98 and 2001/02.

Adams became the most successful captain in the Gunners’ history during a lengthy career with the north London side, becoming the only player ever to captain a title-winning side in three different decades.

Part of the club’s famed ‘back four’ during the late eighties and early nineties, Adams battled well-documented personal issues to remain a key figure in the early years of the Arsene Wenger era at Arsenal, before retiring following the club’s latter double success.

One of the great defenders and captains of the modern era, Adams’ famed leadership has since been celebrated with a statue outside the club’s Emirates Stadium home.

Manchester United’s dominance of the Premier League era has seen the club boast seven different Premier League title-winning captains, with Gary Neville amongst those to have lifted the trophy on multiple occasions.

The former England right-back came through the academy ranks at Old Trafford to become one of the most decorated players in the history of English football, winning eight league titles amongst his extensive collection of major honours.

Two of those title successes came as club captain, Neville leading United to victory in both the 2006/07 and 2008/09 seasons. Those trophies were part of three in succession for the Red Devils, though Ryan Giggs captained the side during second of those campaigns as Neville recovered from a lengthy spell on the sidelines through injury.

The third Manchester United representative on this feature, the commanding presence and uncompromising nature of Nemanja Vidic made him the ideal candidate to captain the side following the retirement of the aforementioned Neville.

The Serbian had established himself as one of the finest defenders in world football during his initial seasons in the Premier League and became a firm fans’ favourite for his full-blooded commitment, Vidic often prepared to put his body on the line for the cause.

Vidic won five Premier League titles during his time at Old Trafford and formed arguably the division’s greatest ever defensive partnership alongside Rio Ferdinand, captaining the side to the latter two of those successes after inheriting the armband.

Manchester City have emerged as arguably the most dominant force in English football over the course of the past decade, rising from the shadows to establish themselves as regular contenders for the game’s biggest prizes amid their billionaire backing.

The Etihad club have won the Premier League title four times in the past eight seasons, with each success led by the club’s most successful ever captain in Vincent Kompany.

The Belgian defender arrived in the blue half of Manchester shortly before the club’s transformative takeover, playing a pivotal role in City’s recent success and winning 10 major honours.

Kompany’s leadership, presence and passion for the project at City saw him cement himself an iconic figure in the club’s history, departing last summer after captaining the club to the first domestic treble in the history of English football.

Roy Keane, for many, is the most iconic captain of the Premier League era, the driving force behind a Manchester United side that dominated under the guidance of Sir Alex Ferguson.

His combative style and sheer will-to-win struck fear into both opposition and teammates alike, a snarling midfield presence who put everything into bringing success to his team in a golden era for the Manchester side.

Keane became the most successful captain in the club’s history and won 12 major honours during an unforgettable career at Old Trafford, including leading the side to four Premier League titles after inheriting the captain’s armband from the retiring Eric Cantona.

Only one player has ever captained a side to more Premier League titles than the Irishman, who never allowed the standards of himself or his teammates drop in over a decade as a Red Devils player.

The most successful captain in Premier League history is Chelsea legend John Terry, the defender having been a vital member of the west London side’s ascent to the summit of the English game.

Roman Abramovich’s billionaire takeover of the club transformed the Blues’ fortunes forevermore, though it was a local-born academy graduate who led the club into an exciting new era of major silverware success.

Terry was named as the PFA Player’s Player of the Year during Chelsea’s first success under Jose Mourinho, becoming just the second Premier League captain – after Roy Keane – to win the award in the same season as title glory.

Back-to-back championships followed the following season before adding a further three titles over the course of a glittering career at Stamford Bridge, including captaining the side to a first ever domestic double under the guidance of Carlo Ancelotti in 2010.

One of the greatest players to have adorned the blue shirt, the ‘Captain, Leader, Legend’ banner celebrating Terry’s achievements still proudly hangs amongst the club’s home support.