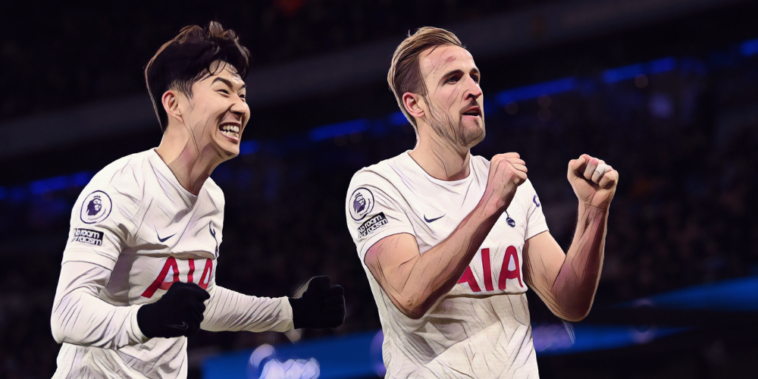 Tottenham forwards Son Heung-Min and Harry Kane have been one of the Premier League’s most dangerous double-acts in recent seasons, with the dovetailing duo having tormented Premier League defences.

Son and Kane linked up once again as the north Londoners beat Manchester City this weekend, with the South Korean turning provider for Kane to score his side’s second in a 3-2 win at the Etihad.

That goal combination was the duo’s 36th in the Premier League, their potent partnership having fired Spurs in recent campaigns.

Following their latest combination, we’ve decided to look at the most prolific pairs in the division’s history, here are the five Premier League partnerships with the most goal combinations.

Another Tottenham pairing sit fifth in the rankings for most lethal Premier League partnerships, Darren Anderton and Teddy Sheringham having combined for 27 goals during their time with the north London outfit.

The two were key components of the Spurs side during the early seasons of the Premier League, with Sheringham finishing as the division’s leading scorer in its inaugural campaign and Anderton establishing himself as a key figure in the side after arriving from Portsmouth.

Anderton spent more than a decade with the club and remained a regular in the side during both of Sheringham’s stints at Tottenham, the forward spending a four-season spell at Manchester United in between two spells at White Hart Lane.

The duo also featured together on 15 occasions for England, including forming part of the squad that reached the semi-finals of the European Championship on home soil in 1996.

Arsenal’s French connection was a huge part of the club’s most successful period of the Premier League era, with Robert Pires and Thierry Henry bringing the va-va-voom and wreaking havoc for the north London side shortly after the turn of the millennium.

The two interchanged beautifully down the left-flank with Pires a trailblazer for inverted and prolific wide players, whilst Henry stood as the Premier League’s greatest talent for much of his time at Arsenal.

Henry won a record four Golden Boots during a glittering career with the Gunners but his profitable partnership with Pires proved almost mutually beneficial, the forward scoring 17 goals from Pires’ assists and returning the favour on 12 occasions.

Their tally could – and perhaps should – have been increased by at least one, their pre-rehearsed passed penalty routine against Manchester City famously not quite going to plan.

Two of the most important figures in the rise of Manchester City and the third most successful Premier League pairing, David Silva and Sergio Aguero cemented themselves as iconic figures in English football during a hugely successful spell at the Etihad.

Aguero stands as the fourth-highest goalscorer in the division’s history and as City’s all-time leading marksman, with the prolific Argentine having regularly been supplied by the creative talents of the inventive Silva.

The duo won four league titles amongst a host of major honours during their time as teammates, before Silva called time on his City career after a decade of success in 2020.

Aguero departed the following season as the highest scoring overseas player in Premier League history, signing for Barcelona on a free transfer before prematurely retiring from the game amid health issues.

Son and Kane moved level as the joint-most prolific partnership in Premier League history against Manchester City this weekend, as the former turned provider for the latter in familiar circumstances.

Kane has established himself as one of the finest forwards in the Premier League and has won the division’s Golden Boot on three occasions since coming through the academy ranks at Spurs.

The England captain has been ably supported by his South Korean teammate since Son’s arrival from Bayer Leverkusen, with the duo having been a constant threat for Premier League defences.

Last season saw Kane finish as both the league’s leading scorer and assist provider, including a stunning win at Southampton that saw the 28-year-old provide four assists for Son as the latter produced a clinical performance at St Mary’s.

Leading the way alongside Kane and Son are two players who played brilliantly together during a golden period in Chelsea’s history, Frank Lampard and Didier Drogba combining for a record 36 goals.

Drogba was often tasked with being Chelsea’s one-man army in attack for much of his career at Stamford Bridge, where the Ivorian was joined by the formidable forward runs of Lampard from midfield.

One of two @DidierDrogba goals at Middlesbrough on this day in 2005! 🗓 pic.twitter.com/x5bAVEpGio

Lampard assisted his teammate on a huge 24 occasions with Drogba returning the favour 12 times, a figure which helped establish the midfielder as the fifth-highest goalscorer in Premier League history after netting 177 times over spells at West Ham, Chelsea and Manchester City.

Their partnership also proved fruitful in terms of bringing team success to the west London side, lifting three Premier League titles together including back-to-back triumphs in 2005 and 2006.