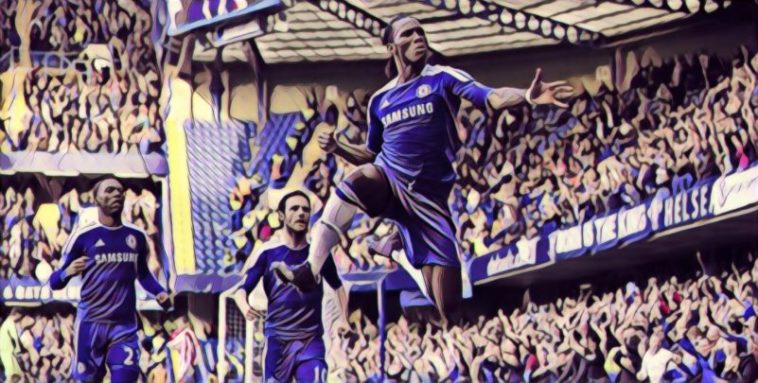 Aside from Diego Costa, Chelsea have lacked a reliable, world-class centre-forward during the past several seasons. The arrival of Timo Werner may change that, but perhaps no Chelsea striker will ever entirely fill the void left by one of the club’s foremost legends: Didier Drogba.

In his two spells at the club, Drogba won 12 major trophies, among which were 4 FA Cups, 4 Premier League titles, and a Champions League. He scored 164 goals in 381 appearances for the Blues, the 4th-highest in the club’s history. 104 of those goals were in the Premier League, while 36 of those goals came in Europe, a club record.

Overall Drogba scoring didn’t score as prolifically as other great Premier League strikers and while he was the top scorer in the top-flight twice, he often had seasons of minimal output.

What secured his adulation among Chelsea fans, though, was his supreme ability to rise to the occasion. In the 12 cup finals he played in, Drogba scored a remarkable nine goals, including the equalizing goal in Chelsea’s Champions League final victory in which he also scored the winning penalty. Drogba always seemed to score when Chelsea most needed him.

Perhaps more importantly, to scrutinize Drogba’s goal-scoring tally is to ignore the wide array of ways he contributed to some of Chelsea’s best-ever teams and how he defined the role of the modern number-nine.

When Drogba arrived in the Premier League, strikers almost always played as a pair in a 4-4-2. The caricature of a traditional English front two is a nimble poacher and a hulking target man, like Emile Heskey and Michael Owen. This allowed teams to front up against the two opposition centre backs with two strikers of differing qualities, unsettling the backline.

Jose Mourinho, however, had a different approach. He wanted to maximize his team’s superiority in the centre of the park by playing a three-man midfield in a 4-3-3. While the role of players like Frank Lampard and Claude Makelele are often heralded for allowing this system to thrive, Drogba’s ability to play as a lone frontman in a league that favored two-strikers was vital as well.

Drogba had a unique diversity of traits that allowed him to be a successful solitary striker. Aside from his obvious height and strength, his pace and movement allowed him to get into goal-scoring situations in varying ways. If they marked him too tightly, he could burst beyond them into space. If they stood off him, they would grant him too much space in dangerous areas.

This meant that Drogba could either occupy both centre backs at once, providing space for the wingers cutting inside, or isolate one defender when being targeted with long passes. The latter was a particularly effective ploy, as Drogba could feed the wingers or the onrushing Frank Lampard with knock-downs. The Ivorian’s movement away from the other centre-back would create the space for the other Chelsea players to exploit. Drogba provided 86 Premier League assists, and many of these came in this way, both during and after Mourinho’s tenure. It’s perhaps why he’s considered one of the greatest headers of the ball ever: he didn’t just score headers, he could bring others into the play with them.

Drogba could also score any type of goal. Shots from outside the box, slaloming runs into the area, towering headers from crosses, incisive runs beyond the defensive line, or scrappy goals from rebounds and scuffed shots. He was the complete goal-scorer, which is perhaps why he adapted so well to Chelsea’s various managers over the years.

In teams that wanted to sit back more, he could be an outlet for counter-attacks. In more proactive sides, he could link play and score goals from more organized passing moves. Drogba’s supreme combination of physical, tactical, and technical quality meant that he could thrive in a variety of playing styles and with various different teammates.

No match better encapsulates this versatility than the 2012 Champions League final, the crowning moment of Drogba’s career. Chelsea started the game in the 4-2-3-1, with Juan Mata supporting Drogba in the ten-role. Against the technically superb Bayern Munich, Chelsea defended for most of the game and even used Ryan Bertrand, who started the game as a left-winger, as an auxiliary fullback to double up on the precocious pairing of Arjen Robben and Thomas Muller. This meant that for much of the game, Chelsea’s attacking output was minimal. Drogba was given minimal service and his main task was to hold up the ball and win aerial duels to relieve pressure from the Chelsea defence.

However, after Drogba’s last gasp bullet header had forced the game into extra time, Muller was substituted for an extra centre-back and Fernando Torres was introduced, resulting in the Blues becoming the dominate side. Torres started on the right-wing, but would frequently make runs into the box, requiring Drogba to interchange positions with his Spanish counterpart and pull wide. At the same time, he had to place himself in goal-scoring positions to ensure that Chelsea’s possession was put to good use. Drogba’s vastly different roles in the different stages of the final, and the efficacy with which he performed them, typifies his brilliance.

In the modern English game, centre-forwards are expected to be complete players; capable of dropping off, drifting wide, running beyond defences, and contesting aerial duels. In many ways, Drogba was the first striker in the Premier League to assume this comprehensive role. He may not have scored at the rate of other heralded strikers of recent years, but his repertoire of skills and ability to score important goals has etched his name into the Premier League history books, and rightly so. He was a trailblazer and a magnificent one at that.