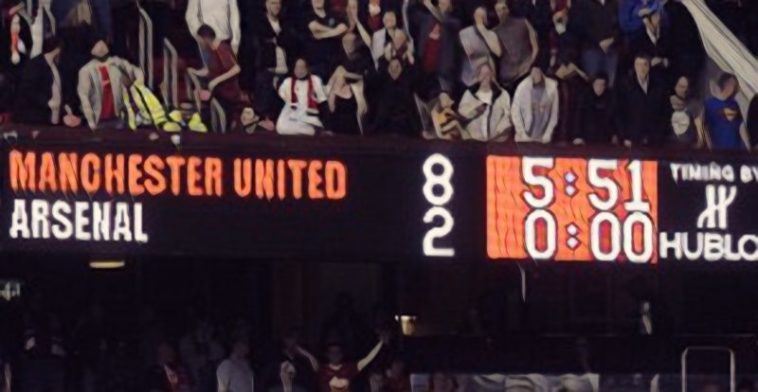 For the second time in 90 minutes Ashley Young quickly surveyed what was in front of him, before unleashing a thunderous, curling effort past Wojciech Szczęsny.

While Manchester United fans were deliriously ushering in a romping victory, the travelling Arsenal support must have looked up at the scoreboard with a sense of dread and foreboding. Emblazoned in red and white lettering the digital screen spelt out their misery: Manchester United 8 – Arsenal – 2.

This was a dark day for Arsenal fans and their once heralded manager Arsene Wenger. A poor start to the season had descended into spineless anarchy.

The excuses had been written before the game; injuries to eight players, suspensions, a difficult summer transfer market. However, the painful truth was unavoidable. This was the nadir of Wenger’s reign in North London. It was the low-water mark in team performance and marked a seismic shift in the dynamics of what had been the Premier League‘s first great rivalry.

Of course, there had and continued to be plenty of fierce grudge matches between rivals in the top-flight. However, Manchester United’s frequent bouts with Arsenal had once been so special.

Festooned on our television screens by Sky’s all-conquering coverage, the fixture had emerged as a twice-yearly television event. The Premier League’s flagship rivalry had so many dynamics that it was simply impossible to cover every base in a single Super Sunday slot. United finally had a consistent title rival and it made for terrific viewing even if it had been long in the making.

After Wenger’s arrival in North London, it soon became crystal clear that he could and would restore one of England’s famous names to its former glory.

The Gunners always had an air of yesteryear about them. From the ornate bronze bust of Herbert Chapman to palatial marble halls and a wonderful old Art Deco Stadium; it was all rather quaint and very grand but none of it was helping the club to find it’s feet in the modern era.

Within a year Wenger radically transformed the club from their frantic seesawing between the top six and mid-table mediocrity. Under the former Monaco manager, they first consolidated with a third-place finish before blowing the hinges off United’s dominance with a league and cup double in 1997/98.

Wenger’s work clicked into place beautifully and the football was breathtaking. Orchestrated by the brilliance of Dennis Bergkamp and Marc Overmars, the country was exposed to a new style of attacking play that won an army of admirers.

Up north, Alex Ferguson looked on as, for just the second time in six seasons, somebody other than the Govan-born manager was holding aloft the Premier League trophy.

What followed was a glorious era of cat and mouse, mind games and some truly memorable encounters. United and Arsenal took every title between them from 1998 to 2004. These heavyweights battled it out for supremacy, setting records and bringing in some of the finest names of the Premier League era along the way. It was a duopoly that sculpted the new league and coated it with a sheen of continental excellence.

After Ferguson’s complaint about a convoluted fixture schedule in 1997, Wenger fired a shot across the bows stating: “It’s wrong the programme is extended so Manchester United can rest and win everything”

Ferguson’s retort was less altogether less gloved: “He’s a novice and should keep his opinions to Japanese football”

A cold war of words had begun and a terse relationship ensued between the two managers. Rivalry in the dugout was also mirrored on the pitch. Midfield generals Roy Keane and Patrick Viera forged the grudge match of the age with their egos and influence barely contained inside packed stadiums and crowded player’s tunnel.

Spurred on by their stellar achievements and enhanced stature in the game the Arsenal board had an eye on the future.

Man United were streets ahead in terms of their commercial revenue and stadium expansion. Factored in on top of this was their enhanced prize money from consistent progression in the Champions League as well as an increasingly global fan base. United was never a poor team, but as a new century began, they had become one of the wealthiest sports clubs in the world.

Arsenal were keen to duplicate this success. Their partnership with Nike was lucrative and they too had become Champions League regulars. However, that aforementioned lovely old stadium was a wee bit of a problem. Simply put it was too small. The old stands and cosy seating denied them the lucrative corporate revenue enjoyed by their northern rivals.

A request to expand Highbury was denied by the local authorities in the late 1990s. This, in turn, accelerated plans to build a brand new state-of-the-art stadium away from their 93-year-old home. Former Arsenal vice-chairman David Dein was instrumental in the project and was keen to build a monument to the club in North London.

Opened in 2006, at a cost of £390 million, the Emirates was indeed a plush new home for the Gunners. 60,000 supporters were given luxurious padded seats with plenty of legroom and stunning vistas of the action. Wenger described the move as the biggest decision in the history of the club – he was not wrong.

Although they were now guaranteed enhanced match day revenue, the opening of the beautiful new stadium collided head on with the Premier League’s age of oligarchs and sugar daddies.

Bank rolled by Roman Abramovich’s personal fortune, Chelsea’s emergence as title winners under Jose Mourinho did an awful lot to disrupt the established order. Their nouveau riche rivals across town would supplant them in the league’s pecking order and make their self-imposed austerity drive all the more damaging.

Repayment of loans totalling £260 million saw wages frozen and transfer budgets slashed. To make matters worse, Chelsea’s takeover was dwarfed by the Abu Dhabi revolution at Manchester City in 2008. The two new rich kids on the block would distort the transfer market and inflate wages across the board. Life was now doubly difficult for the Gunner’s title ambitions.

For Wenger, another blow came when Dein stood down in 2007. Rumoured to have been irked by the board’s sluggishness in seeking fresh external investment, the legendary vice-chairman sold his stake in the club and called it a day after almost 25 years.

It is hard to accurately quantify the effect this had on Wenger. The two had enjoyed a celebrated relationship and a zen-like mutual understanding.

Dein had also been hands-on and very popular with the players, many of whom he’d moved heaven and earth to bring to North London. The likes of Thierry Henry and Cesc Fàbregas were reported to be extremely dismayed by his departure with Wenger himself even offering his resignation in private to his old friend.

Recovery from this perfect storm was always unlikely. Wenger did his bit in keeping the club in the Champions League, despite a reduced budget. This achievement is often over-looked but in the financial context of eye-watering stadium debt, it was essential.

Sadly a place in the top four was not enough to keep everyone happy. A procession of players and veterans from his “invincibles” squad of 2004 departed as the Gunners were no longer able to compete for top honours. Fans also began to grumble about a predictable run of failure and lack of silverware.

By the time he led his team out on to the field at Old Trafford on that ominous day in August 2011, the club had been transformed beyond all recognition. Rocked by the recent departures of Fàbregas and France international Samir Nasri, and depleted by injuries, Wenger’s men had become an afterthought in the title race.

Perhaps what was just as damning for the Arsenal manager that day was the sympathy he received from his opposite number.

Ferguson had weathered the storms of Chelsea and Man City’s emergence up to that point. Unlike Wenger, he continued to deliver titles and Champions League glory. And yet in the aftermath of his young side’s emphatic win over their old rivals, Ferguson refused to twist the knife, instead reflecting on the legacy Wenger had brought to the game:

“We’ve a cynical world now. The media today are so cutthroat…the job he’s done for 15 years has been phenomenal. He’s brought in a philosophy of football and a way of playing… I respect that.” Ferguson said post-match.

Revealingly, the adversarial tone was gone. The crushing nature of his side’s win and Arsenal’s lapse into the wilderness meant that United no longer viewed their old foe as a serious rival. There was a further sense of finality in the aftermath as many former players turned pundits pondered where Wenger could go from here.

Arsenal never really recovered from the emergence of the big-spending interlopers in the title race. The ground had rapidly shifted under their feet after their stadium move in 2006.

Humiliation to United on that late summer’s day only widened the cracks that yawned like gaping wounds and ushered in a decade of further malaise and sorry decline. Once a powerhouse in the title race, they looked like a team of strangers with only Robin van Persie left standing from a successful era that was already long gone.

“Never in the 15 years of Alex Ferguson/Arsene Wenger rivalry have Arsenal appeared as such underdogs as they do against United today.” Mused Sky commentator Martin Tyler as the players took to the field.

By the time their ordeal was over, one of the great Premier League rivalries had shifted on its axis. Gone was the famous dual between title rivals, United simply had bigger fish to fry.