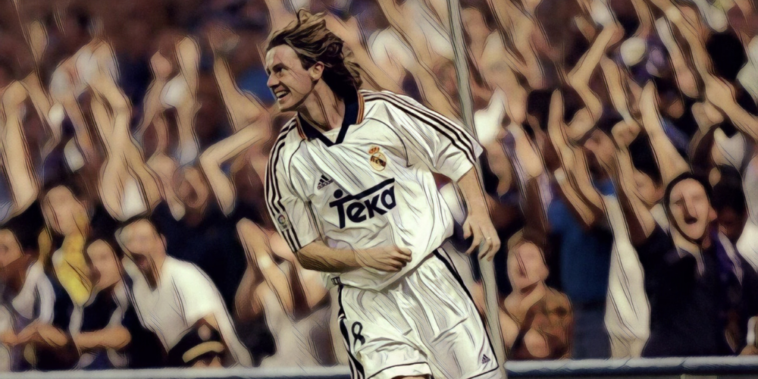 Football fans often adore their own, but amongst a host of cherished academy graduates at Liverpool the name of Steve McManaman is one that is often overlooked.

McManaman was the floppy-haired footballing maverick who rose from the ranks to star at Anfield, before his relationship with the supporters who adored him was sullied following the midfielder’s decision to leave for foreign shores.

Whilst fellow local lads Robbie Fowler, Jamie Carragher and Steven Gerrard all enjoy iconic status on the red half of Merseyside, McManaman’s lasting legacy is rather more complex, despite his emergence as Liverpool’s leading light during the infancy of the Premier League era.

A boyhood Evertonian, McManaman turned down a one-year contract offer with the Toffees as a teenager, instead signing a two-year deal with their cross-city rivals.

The winger – full of running and possessing a fleet-of-foot that left defenders flummoxed – broke into the side in the early nineties, across a period in which the Reds fell from their mantle as England’s dominant force and struggled to adapt to the rapidly changing domestic landscape.

McManaman was the home-grown hero who became worth the admission fee alone, a transitional Liverpool often leaning on the talents of a footballer who galloped gracefully down the flank and made things happen.

The abiding McManaman memories – at least on these shores – should be a of a footballer who floated freely and was capable of spectacular moments, often the shining light of a side that simultaneously entertained and flattered to deceive.

Having made his debut in the First Division in 1990, it took little time for the Bootle-born youngster to make his mark, becoming a regular the following season and being named as man-of-the-match as Liverpool beat Sunderland in the FA Cup final at Wembley.

As the era of the Premier League was ushered in, McManaman found himself amongst a collection of talented wingers in the division and was named as runner-up to Ryan Giggs for the PFA Young Player of the Year award during the inaugural 1992/93 season.

The arrival of Roy Evans as manager in 1994 saw McManaman handed a greater licence of freedom, a tactical change that saw the star develop into one of the Premier League’s most influential footballers.

Arguably his defining performance in a Liverpool shirt came a year later, once again shouldering responsibility in a major final as his singlehanded destruction of Bolton secured League Cup success.

It was a performance that encapsulated the best of the Scouse schemer, daring and decisive with the ball at his feet, as he scored both goals to seal a 2-1 win and silverware for Reds.

No longer confined to the flanks, the freedom granted to McManaman paid dividends for Evans’ side as the 23-year-old’s individual brilliance proved the difference.

McManaman was never a great goalscorer, but he was a scorer of great goals and in tandem with fellow academy product Robbie Fowler the duo tormented Premier League defences during the nineties – even if this was far from a vintage Liverpool side.

The ‘Spice Boys’ moniker that followed a collection of the club’s talents – including McManaman, Fowler, Jason McAteer, Jamie Redknapp and Neil Ruddock – proved difficult to shake and was often used as ammunition against a team who struggled to compete with the likes of Manchester United, Blackburn and later Arsenal.

#OnThisDay in 1⃣9⃣9⃣0⃣, Steve McManaman made his debut for the Reds.

Flawed entertainers, the good and bad of this Liverpool side was best symbolised in 1995/96 as a team – led by McManaman’s league-leading assist total – briefly threatened a title charge before falling short.

McManaman followed that disappointment by impressing at Euro ’96 with England, being named in the Team of the Tournament as the Three Lions reached the semi-finals on home soil.

It was the highlight of an international career in which he was often oddly overlooked, a succession of manager failing to extract the most from a footballer who would soon reach great heights on the continent.

His exit was far from straightforward, however, and the result of two years of uncertainty.

Barcelona, Juventus and Real Madrid had all expressed previous interest in signing the midfielder, with the former having seen a £12m offer accepted before a deal fell through.

The introduction of the Bosman ruling in the mid-nineties provided players with greater freedom to choose their destination of choice, and as Liverpool failed to agree contract terms with McManaman their greatest fears were soon realised.

He signed a pre-contract agreement to join Real Madrid after announcing a desire to play abroad and in 1999 became just the second Englishman to represent the Spanish giants.

The nineties had been a time when the finest domestic talents had often broadened their horizons with exotic moves and McManaman’s move to Madrid provided the player with a platform to compete at the highest level.

For all the mercenary jibes sent in his direction, McManaman has always insisted that finances were not at the forefront of his decision, whilst Liverpool were not in a position to contest for trophies alongside the best European football had to offer.

“It wasn’t financial, because the money Liverpool offered me to stay was virtually on a par. I wanted to leave. At that time I had never played in the Champions League, which was a huge thing,” he added, “I was playing really good football and I needed to test myself. I felt that I needed to go.”

“I wanted to go abroad, I didn’t want to play for somebody against Liverpool. I was playing good football and I had the right kind of clubs interested in me — Barcelona, Madrid and Juventus.

“They were European Champions, World Champions, they were the best team in the world. That white kit, Di Stefano, Puskas, all that. And so it was Madrid.”

He arrived at a Real Madrid side in the midst of turbulence both on and off the field, but McManaman began brightly even if he was unable to resurrect Real’s faltering fortunes domestically, his debut season seeing Los Blancos finish a distant fifth in the race to be crowned Spanish champions.

The club’s league form was in contrast to their performances in continental competition, however, as the arrival of Vicente del Bosque as manager in November saw an upturn in fortunes.

Real reached the Champions League’s knockout stages and eliminated holders Manchester United in the last eight, before beating Bayern Munich – a side they had twice lost to in the group stages – in the semi-finals.

The final was the first-ever same-nation showpiece as Real met Valencia in Paris, an evening in which McManaman’s decision to depart Liverpool was vindicated in spectacular style.

Fernando Morientes’ header opened the scoring, before McManaman doubled his side’s advantage with a stunning scissor-kick goal from the edge of the penalty area, rising with both feet of the ground to fire home a volley.

Raul’s goal sealed a 3-0 win and eighth European Cup success for Real, as McManaman became the first Englishman to win the Champions League with a foreign side.

“I thought McManaman was excellent…there is no question he was man of the match…He was a threat all night and gave Real great penetration from midfield.

“The boy has always been blessed with marvellous stamina and he has the confidence to go past players.”

McManaman’s arrival at Real Madrid came before the presidential change and Florentino Perez’s Galactico transfer policy, but he remained a crucial component of the dressing room as star names including Luis Figo, Zinedine Zidane and Ronaldo all arrived at the Bernabeu.

The play-boy perception that had followed the winger in England was replaced with a professionalism that saw him thrive in the often hostile environment of world football’s biggest club, a popular figure and ally to an eclectic collection of egos and nationalities inside the dressing room.

The Galactico era brought challenges as McManaman was told he could leave the club to balance the books, but he was unrelenting in his desire to succeed in Spain and remained, overcoming obstacles to force his way back into the side.

He featured 42 times in all competitions as Real won La Liga in 2000/01, before adding a second Champions League winners’ medal to his collection the following season – Zidane’s wondrous volley the difference as Bayer Leverkusen were beaten at Hampden Park.

Willing to adapt and adjust to any role in the side, the lung-busting scampers of his Liverpool peak had been replaced with an added guile as the unheralded fan favourite shone in a superstar side.

His fourth and final season brought another league title before a return to the Premier League at Manchester City, bringing an end to his Spanish venture and closing the chapter of arguably England’s greatest footballing export.

McManaman’s time in Manchester ultimately proved a disappointment, a far cry from the glitz and glamour of the Bernabeu as injuries decimated a two-season spell before retirement from the game.

The manner of his exit from Liverpool and that his greatest success came on foreign shores have no doubt contributed to how McManaman is remembered, but there is little doubt his finest football saw him bound beyond defenders as one of the Premier League’s most exciting wide men.

He darted and danced between challenges in perpetual motion and rose to the challenge at the game’s most glamorous side, the skinny and skilful Liverpool local who mixed it with the sport’s stars.