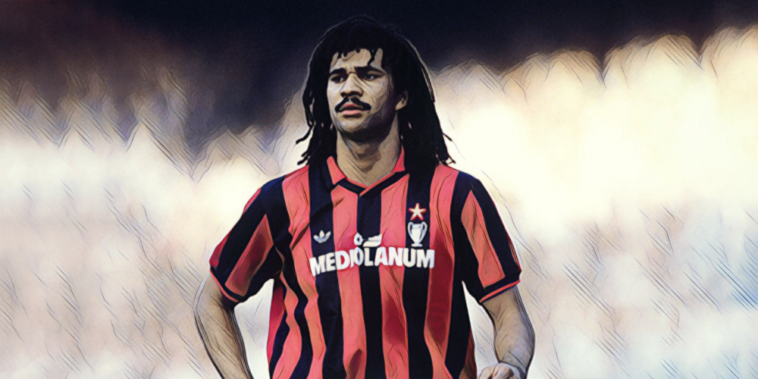 The principles of Total Football are centred around fluidity and flexibility, the overriding concept that each player is interchangeable and capable of operating elsewhere on the field as the game progresses.

Ruud Gullit was a footballer for who Total Football came naturally, a midfielder comfortable in almost any role on the pitch and quite often taking up several within the space of just one fixture.

Gullit took free-form football to the next level, often beginning deep before rampaging forward, striding across the turf with his signature long-legged gait and leaving a trail of opposition players in his wake.

The best years of Gullit saw him cement his status as one of the game’s greatest talents, a dynamic match-winner whose abundance of attributes made him Dutch football’s equivalent of a midfield Swiss Army knife.

Born in Amsterdam, Gullit’s father had emigrated to the Netherlands from the former Dutch colony of Suriname, the small South American nation who has played more than its part in the history of football in the European nation.

Gullit is perhaps the finest footballer of a long lineage of Dutch footballers with Surinamese heritage, one that includes Frank Rijkaard, Clarence Seedorf, Edgar Davids and Virgil van Dijk amongst others.

Despite his obvious potential and proximity to the hallowed system of Ajax, it would be a differing route to the pinnacle of the sport for Gullit, who began his professional venture after becoming the youngest ever Eredivisie debutant at HFC Haarlem.

Three seasons with Haarlem included one relegation, one promotion and a first-ever European qualification, with Gullit name as the second-tier’s finest footballer during that promotion-winning campaign.

Beginning his career at centre-back, the traits of Gullit’s game shone through even in the infancy of his career, with the defender developing a penchant for marauding runs through opposition lines, his effortless ability to burst past challenges eventually leading to his redeployment further forward.

He scored 31 goals in 91 league appearances for Haarlem and made his senior bow for the Netherlands before Feyenoord came calling in 1982, a move to one of Dutch football’s giants that soon offered the opportunity to learn from the legendary Johan Cruyff.

Cruyff signed from rivals Ajax the following summer after the capital club had failed to offer him a new deal, and alongside the emerging Gullit helped lead Feyenoord to a first league title in a decade as part of a domestic double. Gullit, for his 25-goal contribution, was named Dutch Footballer of the Year for the first time.

Gullit added a second Dutch Footballer of the Year accolade in 1986, having crossed from Feyenoord to divisional rivals PSV. He enjoyed the most fruitful goalscoring period of his career after netting 53 goals in just 73 appearances for the Eindhoven side, as successive Eredivisie titles were secured.

Such performances attracted the interest of Europe’s elite and it was AC Milan who signed the dynamic dreadlocked star, investing a world-record transfer fee of €7.5m in a footballer who ended 1987 with the Ballon d’Or in his clutches.

Silvio Berlusconi had sought to ignite Milan’s fortunes with the addition of Dutch dynamite further forward, a fusion of Total Football and Catenaccio as Gullit and Marco van Basten joined a side containing defensive leaders in Franco Baresi and Paolo Maldini.

Gullit scored 13 goals as the Rossoneri ended an eight-season wait for the Scudetto during his debut campaign, before heading to the 1988 European Championship as part of a Netherlands side with the talent to make an impression.

Across a little more than two weeks in West Germany, Gullit and his side exorcised the demons of Dutch football’s near misses on the international stage.

The campaign of Rinus Michels’ side began with defeat to the Soviet Union, but the introduction of Van Basten to the side – the forward had missed much of the previous season through injury – ignited their campaign.

With Gullit powering forward gracefully to join the devastating Van Basten in attack, the Netherlands beat England and Ireland to reach the semi-finals, before a late winner against the host nation earned a final rematch with the Soviets.

Gullit opened the scoring at Munich’s Olympiastadion with a bullet header, before Van Basten’s volley, that volley, earned the Dutch their first major tournament success, with Gullit hoisting aloft the European Championship trophy as the Oranje’s captain.

Gullit’s role through the tournament was unmissable, from his imperious performances to the replica dreadlock wigs that adorned the stands in tribute. He was powerful and peerless, a unique presence both on and off the pitch.

That summer saw Milan add to their Dutch contingent with the signing of Frank Rijkaard, a move that proved the final piece of the puzzle for Arrigo Sacchi’s side, the conduit between their resilient rearguard and the forward threat of Gullit and Van Basten.

Just as the trio had at international level, they conquered Europe, and did so in stunning fashion. Milan navigated their way through the European Cup, their run including a 5-0 semi-final thrashing of Real Madrid in which their Dutch imports all scored.

Gullit and Van Basten each scored twice as Steaua Bucharest were thrashed 4-0 in the final, the performances of the Rossoneri leading to a unique Ballon d’Or ceremony as Van Basten, Gullit and Rijkaard shared the podium in 1988.

Milan defended their European Cup title the following season after beating Benfica 1-0 in Vienna, though Gullit’s inclusion in the side was just his third of the season after sustaining a serious knee injury that decimated his campaign.

The early nineties proved a period of remarkable success for Milan, whose successive European triumphs were followed with a run of three consecutive Scudetto, including a stunning unbeaten campaign in 1991/92.

Fitness issues plagued Gullit, however, and in 1993 he moved on to sign for Sampdoria, at a time when his international career was also reaching its conclusion.

The Netherlands disappointed at both the 1990 World Cup and 1992 European Championship despite being regarded amongst the contenders, whilst Gullit’s feud with head coach Dick Advocaat ultimately brought a premature end to his international career – a scenario both men came to regret.

After spending two seasons with Sampdoria and briefly recapturing flickers of the old magic, Gullit embarked on a significant new challenge and headed to the rapidly emerging Premier League.

English football had began a transformative makeover at the start of the decade and Gullit became a pioneer for the Premier League, one of the division’s first marquee arrivals and amongst the first instances of a ready-made star choosing England as their destination of choice.

Signing for Chelsea in 1995, he began his career at Stamford Bridge as a sweeper, though it quickly became apparent that to unlock the best of Gullit he would need greater freedom further forward.

Moved into midfield, he was an instant success, where even in the twilight of his career the Dutch great often proved a cut above his contemporaries, finishing as runner-up to Eric Cantona for the Footballer of the Year accolade.

One of the best against Man City, courtesy of Ruud Gullit!

Within a year he had replaced Glenn Hoddle as player-manager, taking the reins after the former’s appointment as England’s new head coach.

His presence saw Chelsea sign a whole host of foreign imports that helped transform the club’s fortunes, the likes of Gianfranco Zola, Gianluca Vialli and Roberto Di Matteo amongst the foreign revolution in west London.

Gullit became the first foreign manager and first black coach to win a major trophy in England with FA Cup success in 1997, ending a 26-year wait for silverware at Chelsea before a disagreement with the board brought an end to his reign the following season.

His time in England proved brief but it was a fitting farewell to his playing career, one of the finest footballers of his generation inspiring an influx of talent and techniques from foreign shores.

Gullit had been schooled in Total Football and formed part of a side with Catenaccio at its soul, though flourished and thrived in each role he occupied as one of the most complete talents the game has seen.

Explosive and elegant, strong and skilful, his game had few flaws and how Dutch football would like the next Ruud Gullit to emerge from their ranks to lead the next generation.