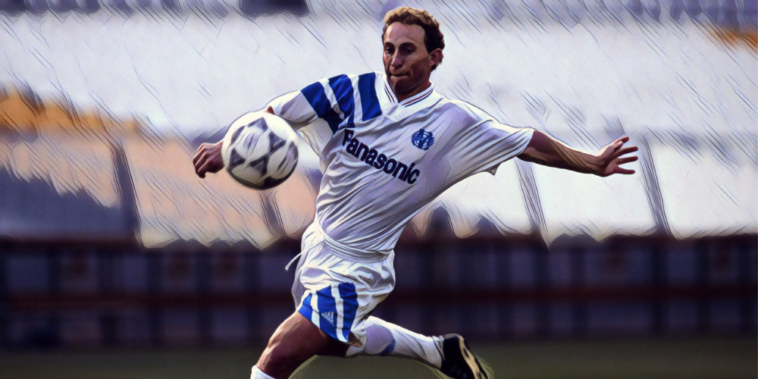 Until the coronation of Lionel Messi as winner of the 2021 Ballon d’Or, just one footballer had ever claimed world football’s greatest individual honour whilst representing a French side.

In truth, Messi’s record-extending seventh accolade came as a result of his performances for Barcelona and Copa America exploits with Argentina, in essence leaving Jean-Pierre Papin unique in earning acclaim for services to French football.

Papin was named as winner of the Ballon d’Or three decades earlier than Messi’s 2021 triumph, during the peak seasons of a career in which he established himself as one of Europe’s leading goalscorers.

Fast, agile, and unerringly accurate around goal, Papin was the premier player during a glittering era for Marseille during the late eighties and early nineties, beginning the latter decade as one of the game’s most potent hitmen.

Papin had made his desire to become a professional footballer clear from the infancy of his childhood, often reported to have skipped schooling to hone the talents that would later light up the continent’s biggest leagues.

His father, Guy, had been a footballer and Jean-Pierre was determined to follow suit, recovering from a collision with car as a youngster to make his first inroads into the game.

Papin wasted no time in demonstrating his natural instinct for converting chances, scoring 16 goals during his maiden professional campaign with second tier Valenciennes FC to earn a move to Belgium’s Club Brugge.

The goals continued to flow after crossing the border, netting a remarkable 32 goals and firing the side to Belgian Cup success, scoring two penalties as rivals Cercle Brugge were beaten 3-0 in the final. Papin’s goals almost also delivered the league title, though goal difference saw Anderlecht claim the championship by the narrowest of margins.

Those performances earned Papin a shock call-up to the France squad for the 1986 World Cup, where the little-known forward scored twice in three appearances as Les Bleus finished third in Mexico.

Ligue 1 sides registered their interest immediately and despite signing a pre-contract agreement with Monaco, persuasive talks with Marseille led to a second transfer in as many summers and a return to France.

His first season with Les Olympiens proved one of adaptation but delivered a respectable 13 league goals, before the following five proved a period of prolificacy as Papin fired Marseille’s golden era.

He finished as the league’s leading scorer for five consecutive campaigns, the latter four all resulting in Ligue 1 titles heading to the Stade Vélodrome as Marseille emerged as France’s footballing force.

Papin’s speed and intelligent movement made him a nightmare for troubled backlines, ghosting on the blindside of defenders and finishing opportunities with aplomb.

He was agile and evasive with a predatory instinct around the penalty, whilst he developed a penchant for spectacular volleyed efforts, goals which became affectionally known as Papinades by the adoring Marseille masses.

As the early nineties arrived he was arguably the most dangerous forward in European football,  having scored 30+ goals in four consecutive campaigns for Marseille.

His leading scorer accolades in Ligue 1 were matched with a prolific record in continental competition as he outscored each of his rivals in the European Cup for three seasons running.

The second of those saw Marseille reach the final, though hopes of becoming the first French side to be crowned European champions were ended after defeat to Red Star Belgrade on penalties in Bari.

Papin’s performances had earned him widespread notoriety, however, including his coronation as winner of the 1991 Ballon d’Or, finishing ahead of Lothar Mattheus and Red Star duo Dejan Savićević and Darko Pančev by a considerable margin in the voting.

He became just the third French footballer to be crowned as Europe’s finest player, following on from Raymond Kopa (1958) and Michel Platini (1983, 1984 and 1985). It was also the first time a player from the French League had won club football’s greatest individual accolade.

Papin spent just one further season in Marseille colours, adding a now customary leading scorer accolade to his fourth Ligue 1 winners’ medal, before the lure of Seria A tempted the club captain away from southern France.

The 1990s saw world football’s biggest icons up sticks and migrate to Italy, with Serie A sides breaking the sport’s transfer record a staggering six times throughout the course of the decade.

The second of those was the £10m fee that prised Papin from Marseille, as AC Milan paired the free-scoring Frenchman with the irresistible Marco van Basten.

Papin’s major move failed to prove a success, however, as he struggled to replicate the goalscoring form that had made his signing so coveted.

He scored 20 goals in all competitions during a respectable maiden campaign with the league-winning Rossoneri, though suffered a second European Cup final defeat as Milan lost to former side Marseille in Munich.

Papin entered the final as a second-half substitute, his star status at Marseille having been replaced with a sporadic role in Milan as a combination of the foreigner-ruling and Fabio Capello’s stifling tactics saw the record signing struggle.

He added a second Serie A winners’ medal the following season but scored just five league goals, as Milan won the title despite scoring just 36 goals from their 34 games, a miserly defence conceding on just 15 occasions in a successful team that failed to wow the neutrals.

Milan were outscored by ten of the eighteen teams in the division and won 1-0 on nine occasions, keeping 22 clean sheets. Their defensive solidity was no doubt a recipe for success, but it failed to bring the best from the forwards amongst their ranks.

Capello’s pragmatism also proved a winning formula on the European stage, however, as Milan reached a second successive Champions League final. With Papin absent from the squad, the Rossoneri upset the odds to thrash Johan Cruyff’s Barcelona Dream Team 4-0 in Athens.

In search of a side better suited to his talents, Papin moved on that summer and joined Bayern Munich in a £2m deal, but his move to the Bundesliga failed to stop his declining fortunes.

Further fitness issues plagued his period in Germany and he scored just three league goals across two seasons with the Bavarians before returning to France, enjoying a brief renaissance at Bordeaux before finishing his career with a single season at Guingamp.

His career was one in which the cards failed to fall into place on several occasions, including an international career that saw France miss out on three major tournaments despite his goalscoring excellence.

Papin formed part of a group of French players who became collectively known as the ‘cursed generation’, following repeated failures to reach major tournaments despite the talent at their disposal.

Whilst those around him performed below expectations for the national side, Papin did what Papin always did – score goals.

He netted 30 goals in just 54 appearances for Les Bleus, a haul that leaves him eighth amongst France’s all-time leading scorers, narrowly behind Zinedine Zidane and David Trezeguet. Amongst the nation’s top 10 scorers of all time, only Just Fontaine can better his goal-per-game ratio in a French shirt.

If his international career followed a similar narrative to unsuccessful stints at European giants in Milan and Munich, then his six-season stay with Marseille was where his legend was formed.

It’s in those surroundings that he captivated audiences and caused anxiety for opposition sides, always alert and on the move in search of his next goalscoring chance.

The colours of Marseille fit just like a glove for Papin, a goalscoring great who became idolised in the cauldron of the The Stade Vélodrome.