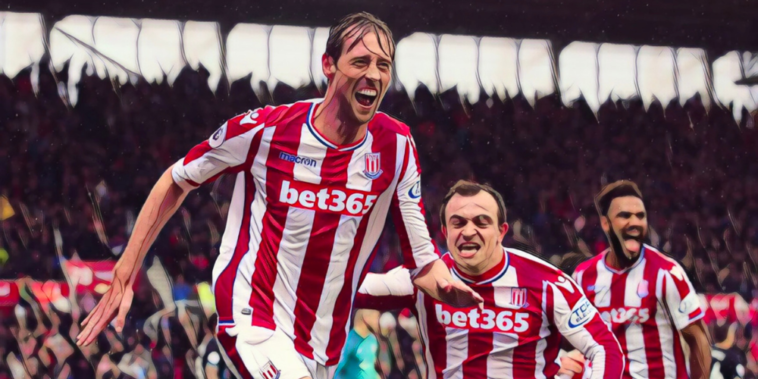 At risk of sounding like a broken record, Peter Crouch never really looked like a Premier League footballer. Both in appearance and demeanour, he was a unique character who stood out among English football’s top division.

Crouch’s career was one of peaks and troughs, one which saw him overcome internal and external doubts to join the illustrious company of scoring a century of Premier League goals.

Along that journey he represented seven Premier League clubs and became almost universally popular, with the self-depreciating striker and his endearing relatability winning admirers far wider than the clubs he represented.

His road began in the academy at Tottenham, with the North London club having prised the promising Crouch from the system at Queens Park Rangers. His height had seen Crouch become a target for bullies in his younger years but was also the attribute which saw him protrude from his peers, which coupled with his technical ability made him a rough diamond in need of a little polish.

In search of games, Crouch headed out on loan. Far from the comforts of the Premier League, his first senior spells were spent in the unfashionable locations of non-league Dulwich Hamlet and IFK Hässleholm, then of Sweden’s third tier.

“I remember on the pitch – certainly in the early days when people didn’t know who I was – defenders and people used to try and wind me up,” Crouch recalled to Joe. “The old one they used to was come and run right underneath me and look up as if I was like up in the sky – that one used to wind me up to be fair because it was just so bad.”

He scored three goals in eight games in Sweden, form which persuaded QPR to re-sign their former academy prospect. A £60,000 deal saw Crouch cross the capital and QPR’s faith in the towering target-man was soon rewarded. Crouch scored ten league goals during his first season, though it was not enough to stop The Rs from being relegated to the third tier.

Portsmouth were next to take a chance on Crouch. Their £1.5m investment was repaid after 18 league goals during the 2001/02 and ‘two-metre Peter’ was soon on his way back to the Premier League.

Just two seasons after being forced to spend time in the reserves of Sweden’s third division, Crouch was a Premier League player after a £5m move to Aston Villa. Despite a goal on his home debut, it was a transfer that Crouch candidly admitted came too soon as the forward failed to cope with the step up to the top division.

His first full season saw him make 18 goalless appearances and the critics came out in full force, before a loan spell at Norwich where he helped the Canaries to promotion.

He made just one more appearance after returning to Villa, before the club cut their losses with a sale to Southampton. Harry Redknapp was behind the deal, having been director of football at Portsmouth during Crouch’s successful spell at Fratton Park.

It was a unison that proved fruitful as Redknapp’s trust in Crouch was vindicated. After biding his time over the first six months of the season, he became the Saints focal point following the sale of James Beattie in January.

Crouch scored eight goals in the club’s final 14 league fixtures of the campaign, as the 23-year-old finally proved he belonged at Premier League level. He ended the season with 16 goals in all competitions, but again his goal record was not enough to prevent his team from the drop.

That haul included both goals in a 2-0 win over Liverpool, who came calling that summer. The move to Anfield represented a huge step up for Crouch, with the Reds crowned as European champions the previous season. The doubts were loud and increased in voice as the goalless games grew in a stuttering start.

Crouch took 18 games to open his account at Liverpool, with his four-month drought ended with a brace against Wigan in December. From there his confidence climbed and across three seasons on Merseyside he became a popular figure. His debut season ended with silverware as Liverpool beat West Ham to win the FA Cup, with Crouch teeing up Steven Gerrard’s first equaliser in Cardiff.

His second campaign was his finest in red, as he hit 18 goals in all competitions. Seven of those came during Liverpool’s run to the Champions League final, including a stunning overhead kick against Galatasaray that remains among the most memorable struck at Anfield in Europe.

The question marks over Crouch’s game had gone and his brilliant technique came to the fore. Never more so than a perfect hat-trick against Arsenal in March 2007, as Liverpool tightened their grip on a top-four finish.

He departed Liverpool to sign for Portsmouth in 2008, after Fernando Torres’ arrival had pushed Crouch down the pecking order. Reunited with Redknapp once again, a steady stream of goals soon followed. His second spell on the South Coast lasted just one season however, as Redknapp once again sought Crouch’s characteristics for his side.

Redknapp had left Portsmouth to take charge at Spurs and Crouch came full circle to re-sign for the club where he first penned a professional deal. Two seasons brought 24 goals in 93 appearances, with the selfless striker proving a fine foil for the likes of Jermain Defoe and Rafael van der Vaart.

Crouch scored the decisive winner against Manchester City as Spurs qualified for the Champions League for the first time in 2009/10 and was crucial to the club’s run to the last eight in Europe the following season. He netted seven goals, which included a hat-trick against Young Boys in the qualification round and a winner against AC Milan at the San Siro.

Next stop on an increasing list of top-flight clubs was Stoke. By now, Crouch had turned 30 but his game never relied upon pace. His presence was the perfect profile for a Potters side who had long unsettled sides with physical attributes. Former Chelsea midfielder Joe Cole once likened the tunnel at Stoke to Jurassic Park and Crouch was the new sizeable attraction.

He scored ten league goals during an impressive debut campaign, a return which earned him the club’s Player of the Season accolade. Stoke’s Goal of the Season award also found its way to the Crouch household, courtesy of an exquisite touch and volley during a draw with Manchester City.

Crouch spent eight seasons with Stoke and saw his Premier League goal haul creep towards the century. The landmark moment arrived in February 2017, as he turned Marko Arnautovic’s cross to join the division’s fabled 100 club. At 36 years and two days, he was the oldest player to achieve the feat and one of just six – alongside Sadio Mané, Emile Heskey, Les Ferdinand, Andy Cole and Ryan Giggs – to reach 100 without scoring a penalty.

After turning in the milestone goal against Everton, he celebrated with the robot dance which had become his signature. It was this body-popping routine from Crouch that first projected his likeable persona to a wider audience, when he introduced his mechanical moves to the watching world after a hat-trick for England against Jamaica in 2006.

That treble was part of an impressive haul of 22 goals in 42 appearances for the Three Lions, a fine record by any standard, but one made even more admirable when considered Crouch spent much of his international career as a Plan B. At an average of 0.52 goals-per-game, it’s a strike rate better than both Alan Shearer and Wayne Rooney.

Plan B was indeed where Crouch remained for the latter period of his career, a late roll of the dice when teams were chasing a game. His unusual mix of attributes made him a potent weapon and one effective at changing the dynamic of a match.

He retired with the record for the most headed goals in Premier League history. Even for a footballer with his obvious aerial advantage it is a remarkable achievement, overtaking a list of names more natural at attacking a flighted football.

Post-football he has moved into a successful media career, where his genial nature and light-hearted jokes – often at the expensive of himself – have continued to increase his popularity.

Avoiding the tribalistic realm of football to win admirers all over is no easy feat, but one Crouch has navigated with some success. As relatable as they come in an era of increasing disconnect between stars and supporters and a scorer of some truly great goals. What’s not to like?