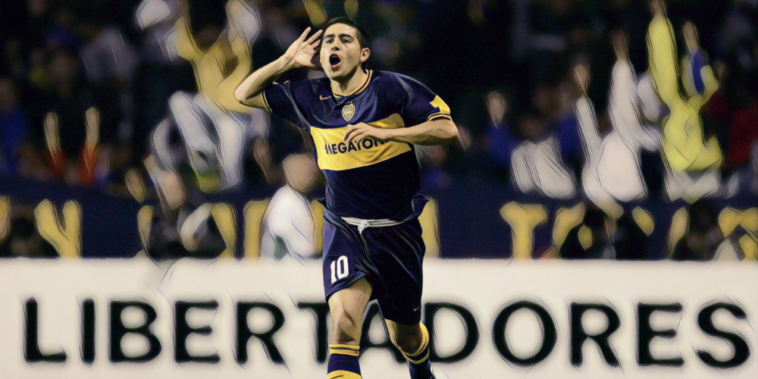 Once in a while a footballer comes to the fore who, in method and manner, flies in the face of all convention. A player who marches to the beat of his own drum, with a cadence that is entirely his own.

Slender, tall and often sullen in appearance, former Argentina international Juan Román Riquelme was a stylistically unique footballer. A creative midfielder who roamed about nomadically, he appeared wherever he pleased to engineer opportunities for others.

Like his idol Maradona before him, Riquelme began his playing career with Argentinos Juniors, before later moving to his beloved childhood club Boca Juniors. When Maradona retired in 1997, Riquelme inherited ‘The Golden Boy’s’ iconic number 10 jersey and, inevitably, comparisons were drawn between the two.

It’s true that both players possessed that certain panache – that otherworldly insight. At times they were simply untouchable, as though they were playing inside their own protective bubbles. However, in their disposition, technique and physique, they could not have differed more.

Indeed, every budding Argentine playmaker who has emerged since the turn of the century has been dubbed ‘The New Maradona’, regardless of their form or function. Pablo Aimar, Ariel Ortega, Andrés D’Alessandro, Carlos Tevez, even Messi – all have been burdened by the curse of comparison.

In 2002, Riquelme followed in Maradona’s pioneering footsteps by joining Louis van Gaal’s Barcelona for £10m. The switch proved to be a particularly perturbing experience. Shortly before leaving Buenos Aires, Riquelme’s brother Cristian was kidnapped – a feature of society in post economic depression Argentina.

Jorge Milito, father of Argentina internationals Diego and Gabriel, had been kidnapped earlier that year. The Milito siblings were forced to pay a ransom of 100,000 peso (roughly £25,000) for his release and, soon after, both brothers emigrated to Europe.

Having negotiated with his brother’s captors and paid their hefty ransom, Riquelme would later point to the traumatic ordeal as the reason he left La Bombonera. Perhaps a somewhat duplicitous assertion, particularly in light of his famously fractious relationship with club president Mauricio Macri.

Motivations aside, Riquelme’s move to Catalonia was an unmitigated disaster.

In the aftermath of the transfer van Gaal claimed it was a ‘political signing’ – one not of his choosing. So, in petulant defiance, the Dutchman treated Riquelme with a callous indifference from the outset, even claiming the Argentine’s ‘selfish’ style of play was an indulgence “no top team could afford.”

On the rare occasions Riquelme featured for the Blaugrana, van Gaal played him out of position. Shunted out onto Barca’s flanks, the dejected Argentinian found himself competing for positions he had no interest in filling. For the first time in his career, his confidence dwindled.

Having won three Primera División titles and the Copa Libertadores twice, Riquelme had enjoyed legendary status among Boca’s famously vociferous fan base. For a player affectionately nicknamed “El Ultimo 10” by Maradona’s disciples – for the man voted South American Player of the Year in 2001 – his time spent out in the cold at Barca was soul destroying. He needed to feel loved again.

In the summer of 2003 Riquelme joined up and coming La Liga outfit Villarreal – a quaint, family oriented Valencian club, albeit one with a rich and enterprising owner. Away from the glitz, glamour and expectations of the Nou Camp, Riquelme kick-started his floundering career and became the creative pivot in a rip-roaring Villarreal side.

In 2006, the playmaker plotted the club’s course on their remarkable journey to the semi-finals of the Champions League. Trailing 1-0 from the first leg, Villarreal dominated Arsenal at the Estadio de la Cerámica, but came up agonisingly short in the end.

With just a minute of normal time remaining Pellegrini’s side were awarded a dubious penalty. A noticeably rattled Riquelme stepped up to take the high-pressure kick, but saw his tame effort saved with ease by Jens Lehmann.

Villarreal won the hearts and minds of neutrals that season, while Riquelme – his miss aside – sent an emphatic message to van Gaal. Indulge him and reap the rewards.

Later that summer, Argentina manager José Pékerman did just that, building his World Cup side around Riquelme.

Undoubtedly the tournament’s most influential player, Riquelme controlled the tempo of a match like no one else could. The laser-like accuracy of his dead-ball deliveries was extraordinary. He was the central figure as Pékerman’s side reached the quarter-finals, a tight affair they eventually lost to hosts Germany via a penalty shoot-out.

Riquelme was at the centre of one of the highlights of the tournament – Argentina’s second goal in their 6-0 demolition of Serbia & Montenegro. A goal that oozed the Villarreal man’s style, time seemed to stand still as the awestruck and leaden-footed Serbs were mere spectators to an Argentine masterclass in passing and movement.

Between Maxi Rodríguez’s dispossession of Mateja Kežmann and Esteban Cambiasso prodded finish at the opposite end, The Albiceleste strung 24 consecutive passes together, with the majority of the team contributing. From simple lay-offs to deft flicks, the full spectrum of passing was on show.

Of course, Riquelme was at the centre of it all, gliding about effortlessly as he had throughout the tournament.

Somewhat unexpectedly, Argentina’s number 10 retired from international football in 2009, citing irreconcilable differences with the newly appointed head coach – Maradona. Refusing to even utter his former idol’s name, he claimed, “We did not agree on much. We do not have the same principles. As long as he’s coach of the team, we cannot work together.”

Looking at the trail of vexed coaches he left in his wake, there is little doubt that Riquelme’s irascible nature required carefully considered management. Even Pellegrini, who brought out the best in the midfielder, eventually fell out with him.

In truth, few players in history have divided opinion like Riquelme has.

Just how good was Riquelme? 🤩pic.twitter.com/C4lE8yu4XM

His detractors claim he’s overrated, that he hid during big games and often left his team mates in the lurch. They insist that his advocates are hipsters, who only trot out his name in the interests of bohemianism.

Love him or hate him, his style was enigmatic.

Some players relied on sheer speed and endurance, whereas Riquelme’s tact was all about timing and deception. Like an ambush predator waiting patiently to capture his prey, he stalked the opposition defence until the opportune moment arose.

He manipulated the ball like few could (or can), possessing an uncanny knack of shielding the ball from his opponents view. Like a sleight of hand artist, every extension of his body was another layer of distraction, each movement was fluid and purposeful, always with the intention of keeping the opposition’s focus on him, instead of the ball.

Riquelme called time on his career in 2015, closing a chapter in football’s history that is yet to be reopened. A supremely gifted yet frustrating character, his popularity is rooted in our deep fascination with the inimitable. In a sport that demands perfection, Riquelme was a brilliant but flawed diamond.