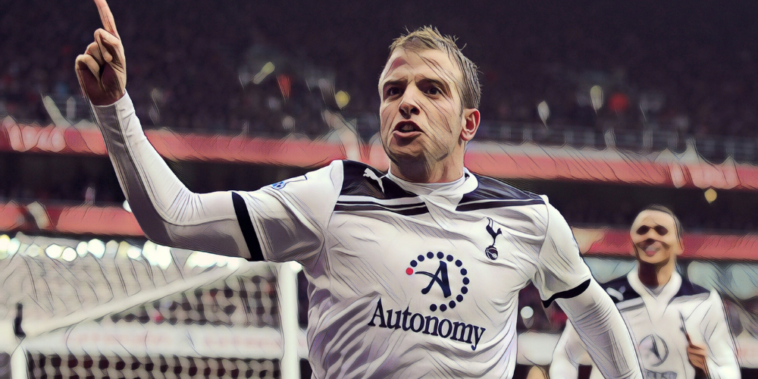 Football fans often gravitate towards mercuriality, so commonly an attribute associated with cult heroes past and present.

Football, after all, is an entertainment business and whilst tribalism and results can dominate the consciousness, the real lifeblood of the sport are players capable of producing match-winning moments on a whim.

Rafael van der Vaart was a footballer who mastered the art of drawing gasps from supporters, possessing a silky technique that was often greeted with rapturous applause from those in the stands.

Van der Vaart’s career never scaled the heights it perhaps should have, his lack of silverware success an oddity when assessed against the quality possessed in the Dutchman’s left foot, one which made him one of the most gifted creatives of his generation.

Born in Heemskerk, a small town in the Netherlands, he grew up in a trailer park as the son of a Dutch father and Spanish mother, honing his craft on the streets and developing the out-of-the-box creativity that would remain a part of his game as he reached the sport’s summit.

Inducted into the Ajax academy system, the free-floating nature of his game and cultured footwork saw comparisons drawn to none other than Johan Cruyff – quite the compliment for an aspiring Dutch talent.

He progressed through the ranks as part of an exciting collection of youngsters including John Heitinga and Wesley Sneijder, each breaking into the Ajax side following the turn of the century.

From the first instances of Van der Vaart in the senior side, excitement grew at the arrival of a potentially special talent, his manipulation of the ball and space standing out even in his teenage years.

His first full season ended with a respectable nine goals, before the teenager exploded as Ajax won the Eredivisie title in 2001/02, finishing as the club’s leading scorer with 17 goals across all competitions.

The midfielder’s haul included a run of seven consecutive fixtures scored in, whilst he was named as the Netherlands’ Talent of the Year despite suffering a serious knee injury that saw him miss large parts of the campaign.

Far from blessed with natural athleticism, the class of Van der Vaart came from his speed of thought and immaculate first touch, affording himself the room needed to manoeuvre shooting opportunities or cutting passes between lines.

Injuries again hindered his 2002/03 season, though he managed an impressive 22 goals from 30 games, with his performances earning Van der Vaart the inaugural Golden Boy award as Europe’s finest footballer under the age of 21.

What had appeared a straightforward ascent to the top of the sport hit obstacles during his latter seasons with Ajax, however, questions over his form and fitness – alongside a public feud with teammate Zlatan Ibrahimovic – leading to criticism of Ajax’s star talent.

The rivalry between Van der Vaart and Ibrahimovic erupted following an international friendly between the Netherlands and Sweden, one which the former accused Ibrahimovic of deliberately causing injury after a high challenge resulted in the midfielder being substituted.

The saga failed to find an amicable conclusion as two outspoken leaders of the Ajax side collided, with Ibrahimovic sold to Juventus following the fall-out.

Van der Vaart had been named as club captain ahead of the 2004/05 season, but it proved his final in an Ajax shirt. Having been linked with almost every major club on the continent, he made the surprise decision to turn down the advances of Europe’s elite and sign for Hamburg.

It was a move that baffled those with first-hand experience of Van der Vaart’s talent, but on a personal level it proved a fine fit for the mercurial midfielder who became an instant fans’ favourite in the Bundesliga.

Van der Vaart fired his new side to Champions League qualification during his debut campaign and was later named club captain, spending three seasons in Germany and scoring 48 goals in just 113 appearances to cement his place in the hearts of the Hamburg support.

His talent, however, deserved a grander stage and when Real Madrid came calling in 2008 it proved an opportunity too difficult to ignore.

He scored a stunning strike on his debut against Numancia and began his career in Spain in excellent form, scoring a hat-trick in just his third appearance as Real hit seven past Sporting Gijón at the Bernabeu.

Part of strong Dutch contingent alongside fellow arrivals Arjen Robben and Wesley Sneijder, the success failed to last as Van der Vaart netted just one further goal across the remainder of the campaign.

The following summer brought huge upheaval, as Florentino Perez’s re-election as president brought a second wave of the Galactico era, with Cristiano Ronaldo, Kaka, Karim Benzema and Xabi Alonso all arriving in a record-breaking recruitment drive.

Sneijder, Robben and Klaas-Jan Huntelaar all moved on as Real cut costs, though Van der Vaart opted to remain and fight for his place despite the wealth of competition for places.

Despite finding himself on the fringes he managed six goals and seven assists from 13 league starts, but in need of greater game time and status, a transfer became inevitable.

In the final stages of the transfer window that move materialised, as Tottenham secured an £8m deal to bring the Dutchman to the Premier League. Even given his sporadic use in Spain and unorthodox route post-Ajax, it was a fee deemed a bargain for a player of Van der Vaart’s calibre.

It was in north London where Van der Vaart believed he enjoyed his best years, finding himself as the centre-piece of an attractive team containing Luka Modric and Gareth Bale, and with a manager in Harry Redknapp who indulged the invention he could provide.

The Dutchman struck up an instant rapport with Peter Crouch, operating in the shadow of the towering target-man and regularly making the most of the knock-downs and space his partner afforded him.

Possessing a perfect picture of the game around him and a left foot that could execute the passes already visualised, he was a flair footballer in a side that often brought the fun-factor under Redknapp.

He finished as Spurs’ leading scorer with 13 league goals and reached double figures in the Premier League for a second successive season the following campaign, whilst his extroverted passion and penchant for scoring against Arsenal saw him idolised on the terraces.

It was that latter knack that ensures Van der Vaart remains a popular figure amongst Lilywhites, with his outstanding contributions including two assists and a goal as Spurs came from two goals down to win at the Emirates in 2010/11.

He scored twice in another thrilling north London derby at White Hart Lane the following campaign, his brilliant brace added to with a double nut-meg humiliation on Jack Wilshere, as Spurs’ fan favourite lived up to his star billing.

Sadly for both club and player it was an all too brief romance, and after registering 46 goal contributions in 77 appearances during his two-season spell at Spurs, he returned to Hamburg.

The arrival of André Villas-Boas as manager saw Van der Vaart informed he was no longer guaranteed a place in the side, leading to a premature exit and return to Hamburg which failed to hit the heights of his previous stint.

The Hamburg side he returned to had fallen on hard times and problems both on and off the pitch saw the midfielder contribute just 18 goals across three seasons, before his career wound down following short spells at Real Betis, FC Midtjylland and Esbjerg fB.

For some, Van der Vaart’s is a tale of unfulfilled talent given the precocious promise he showed at Ajax, with his failure to add to a pair of Eredivise titles won in Amsterdam unbefitting of the talent he possessed,

Less tangible success came in the adoration he received at several of his sides, whilst 109 caps for the Netherlands rank him fourth in the all-time rankings, having also formed part of the side that reached the 2010 World Cup final.

Van der Vaart’s legacy is perhaps not one that will dominate the consciousness in decades to come, but for those who watched his finest football he often offered hope as the turnstiles turned on match-day.

Capable of winning matches at any moment, he was an elegant enigma who so often did so.