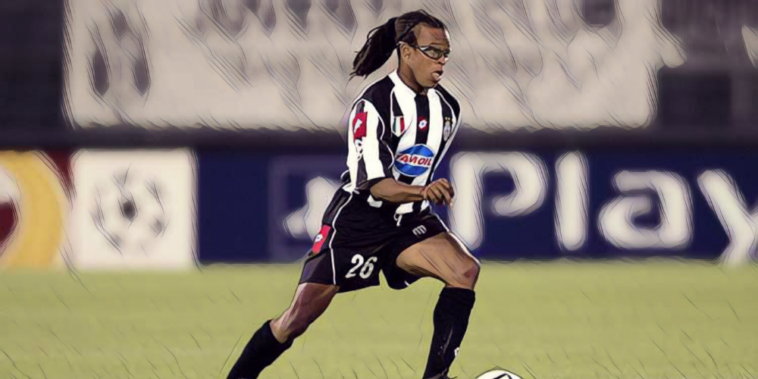 Edgar Davids was among the most distinctive footballers of the nineties and noughties. With his dreadlocked hair and trademark goggles, Davids was an unmissable presence during a career spent at Europe’s biggest clubs.

For all that Davids’ unique look made him stand-out, it came alongside a talent that made the Dutchman one of the best midfield enforcers of his generation.

Davids was born in Paramaribo, Suriname. The South American nation is the smallest on the continent but has had a remarkable role in modern Dutch football.

Having seen Dutch-Surinamese stars such as Frank Rijkaard and Ruud Gullit inspire the national side to European Championship success in the late eighties, David was among the next generation of talents to break through across the next decade.

He moved to the Netherlands as an infant and began honing his sporting skills on the streets, dominating in small-sided games alongside his brother and friends.

Davids’ break came after he was inducted into Ajax’s fabled academy system at the age of 12, following two previous rejections from the nation’s biggest club.

While his game was later built on combative energy and midfield bite, his tutelage at Ajax proved a fine education in the technicalities of the game. Schooled in the art of two-touch football and pass and move, he progressed through the ranks to make his debut in 1991.

The following seasons proved a golden age for Ajax.

Louis van Gaal – who had been promoted to head coach in the same month as Davids’ debut – soon entrusted the midfielder with a pivotal role in his emerging side. Davids had begun his career in an advanced position from the left, but Van Gaal believed his attributes were more suited to a central all-action role.

It was Van Gaal who first nicknamed Davids ‘The Pitbull’, a reference to the midfielder’s relentless snapping at opposition ankles.

A first Eredivisie title arrived in 1993/94, before the following season brought record-breaking achievements. Ajax retained the title with 106 goals scored and remained unbeaten in both league and Europe, their stunning season ending with a fourth European Cup after AC Milan were beaten 1-0 in Vienna.

Van Gaal’s young side had conquered football’s Mount Everest and Davids was instrumental to their triumph, a combative midfield general who mixed technique with tenacity in the engine room.

As opposition midfields were outfought and outplayed, Davids’ mere presence invoked anxiety. Take just one heavy touch, and be prepared to feel the Pitbull’s bite.

Ajax’s famous side won a third consecutive title the following season and again reached the Champions League final. Unable to retain the trophy, Davids missed the first spot-kick in a shootout defeat to Juventus.

The vultures of European football’s elite soon circled and Ajax’s team was broken up as the Bosman ruling aided an exodus in Amsterdam. Davids and teammate Michael Reiziger were among several names to head to Serie A, with the duo joining AC Milan in 1996.

The move to Milan failed to work out as hoped. A broken leg saw his debut season curtailed, as the Rossoneri slumped to an 11th-placed finish. Unable to regain his place, he was allowed to leave for rivals Juventus and the £3m fee proved a sound investment for a bargain-hunting Old Lady.

Across seven seasons in Turin, Davids re-emerged as one of Europe’s best.

Described as a “one-man engine room” by Marcello Lippi, Davids’ dynamism proved the perfect foil for Zinedine Zidane as Juventus were crowned champions in 1998.

Football’s best partnerships are often a mix of silk and steel, with Davids’ willing to hunt and harass opponents as Zidane orchestrated alongside him in mesmeric fashion. Their midfield axis was both the brain and heart of the Bianconeri’s body.

Whilst Zidane departed for pastures new at Real Madrid, Davids remained and brought further silverware to Turin. However, he was forced to deal with a diagnosis of glaucoma in 1999, which saw him adorn protective goggles for the latter period of his career.

“It was quite a big blow, Davids told FourFourTwo. “I was worried and I did think I might have to retire. But then I found out there were options: wear goggles. It was strange the first time I had to play in them: they would steam up so it took time to adjust, but I don’t think it affected my performances.”

The setback failed to hold Davids back as league titles arrived in consecutive campaigns during the early noughties, alongside Champions League final appearances in 1998 and 2003.

After seven seasons of stellar service and 236 appearances for Juventus, he signed for Barcelona on loan for the second half of the  2003/04 campaign. Davids’ role had been reduced in Italy and he joined a team in desperate need of authoritative impact.

Languishing in seventh, the arrival of Davids immediately coincided with an upturn in form in Catalonia as the menacing midfielder stamped his mark on Frank Rijkaard’s side.

Despite his impact, he returned to Serie A at the end of the season and signed for Inter Milan on a free transfer. Completing the hat-trick of Italian football’s northern powerhouses, he spent just one disappointing season with the Nerazzurri before a move to the Premier League.

English clubs had long admired the robust brilliance of the Dutchman and Tottenham agreed a deal to bring Davids to north London. Far from a final sojourn in a new league, he instead wasted no time in attempting to raise Spurs’ standards.

“When he came to Spurs, something really stood out for me,” former teammate Jermaine Jenas told FourFourTwo’s Player’s Lounge.

“Technically, I didn’t think he was as good as I thought he would be. Like, you know those Nike adverts he used to be on where he’d do all those tricks and stuff? That wasn’t really what he was about, Edgar, that’s not what made him the player he was.”

“We finished training one day and I think we’d had a bit of an average training session,” Jenas said. “He went around saying, ‘We’ve got a meeting’ – he dragged people out of the gym and out of the physio saying and we all went in there thinking Martin Jol was gonna be in there.

“He was just stood there and he said, ‘What do you lot want? Because if you want this, you need to sort yourselves out.’ He was basically saying, ‘I’ve won it. At the end of my career, I’ll be alright, but you lot, you’ve not been there, and if you want it, you need to start doing this, this and this,’ and I remember specifically a load of people walking out – even probably myself – almost laughing at him, like bloody hell, calm down Edgar, relax will you?

“It wasn’t until later on in my career that I realised: that’s why he achieved what he did in the game. Because the mentality that he had to win games far surpassed anything he could do on a football pitch.”

After two seasons with Spurs, Davids’ career wound down with a return to Ajax and a short spell at Crystal Palace before beginning his coaching career in the humble surroundings of a player-manger role at Barnet.

It was a strange setting for a footballer who has driven the midfields of Europe’s biggest clubs, one who had reached the semi-finals of three major tournaments during a career with the Netherlands that brought Davids 76 caps for the Oranje.

At his best Davids shone as the snarling spine of his side, showcasing a dogged determination that made his moniker more than fitting.

When crossing the white line, the pit bull was unleashed, crashing into challenges and chewing up all midfields that got in his path. Ferociously competitive, but elegant in possession, there was more to Davids than just bark and bite.