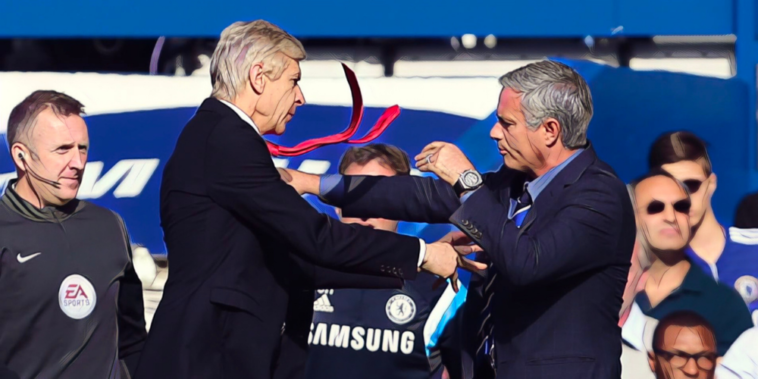 Chelsea and Arsenal meet in the Premier League this weekend, in a huge clash between two capital clubs separated by just eight miles.

The two teams have battled for supremacy as London’s finest footballing outfit in the modern era, with Chelsea emerging as the capital’s most successful side since the turn of the century.

There have been some captivating clashes and iconic moments in the modern rivalry of the sides and ahead of their latest meeting at Stamford Bridge we’ve decided to look back at some of the most memorable.

Here are six iconic moments from the Arsenal and Chelsea rivalry.

Few footballers have ever defined an Arsenal-Chelsea contest with such individualistic brilliance as Nwankwo Kanu, who stunned Chelsea during a thrilling clash between the teams during the 1999/2000 season.

Chelsea had won six of their opening nine fixtures and were yet to concede a goal at home, with the west Londoners racing into a two-goal lead that looked set to claim the Blues the bragging rights at the Bridge.

However, Kanu took matters into his own hands – or rather, mercurial feet – to turn the game around with two goals in quick succession levelling the scores.

The Nigerian wrote himself into Premier League legend after completing his hat-trick in sensational fashion, his third goal proving a little bit special as he danced around goalkeeper Ed de Goey on the byline before bending in an unstoppable finish from an acute angle.

Kanu’s glorious goal sparked the unforgettable ‘Kanu believe it!?’ commentary from Martin Tyler and remains one of the most memorable individual Premier League performances from an Arsenal player.

Chelsea and Arsenal have met in five major cup finals across all competitions, with the first coming in 2002 as the teams squared off in the FA Cup final.

Arsenal were in pursuit of a domestic double ahead of the clash with Chelsea at the Millennium Stadium in Cardiff, but were frustrated for much of the final as the Blues battled in the Welsh sunshine.

A pearler from Parlour, #OnThisDay 💥

It took a special moment to open the scoring as Ray Parlour’s spectacular effort gave Arsenal the lead, the midfielder bending home a brilliant finish from distance to hand Arsenal the advantage.

Bridge’s bolt from the blue

The rivalry between the sides reached new levels after Roman Abramovich’s takeover at Chelsea, as the west Londoners emerged as a real threat to Manchester United and Arsenal’s duopoly of the Premier League.

The Russian billionaire invested huge sums during his first summer in power at Stamford Bridge and an exciting collection of imports finished the season as Premier League runners-up to Arsenal’s ‘Invincibles’ side of 2003/04.

However, a billionaire-backed Chelsea ended Arsenal’s hopes of a maiden European success as the two teams met in the Champions League quarter-finals.

Arsenal were favourites after securing a 1-1 draw in the first leg at Stamford Bridge and took a first-half lead through Jose Antonio Reyes in the return meeting.

The left-back raced onto Eidur Gudjohnsen’s pass to rifle in an 87th-minute winner for the Blues, who dumped out an Arsenal side considered among the favourites for Champions League success.

Jose Mourinho and Chelsea were found guilty of ‘tapping-up’ Cole at a hotel meeting in which the Arsenal defender was deemed a compliant participant, as the west Londoners sought to tempt the academy product across the London divide.

Cole had won two league titles with the Gunners since emerging from their ranks, but infamously said the club’s contract offer had him ‘trembling with anger’.

”I nearly swerved off the road,” Cole said in his autobiography about receiving Arsenal’s contract offer.

“’He [Arsenal vice-chairman David Dein] is taking the piss, Jonathan!’ I yelled down the phone. I was so incensed. I was trembling with anger. I couldn’t believe what I’d heard. I suppose it all started to fall apart for me from then on.”

Just a year after Chelsea were found guilty of tapping up Cole at a not-so-secret meeting, he signed for the Blues in a deal worth £5m and William Gallas in exchange.

Cole spent eight seasons at Chelsea and won eight major honours, including a third Premier League title and the 2012 Champions League. Arsenal, by contrast, have not won the Premier League since his departure.

Robin van Persie was the finest footballer in the Premier League during his final season at Arsenal, a campaign that saw the forward win both the division’s Golden Boot and a Footballer of the Year double.

Among his best performances of the 2011/12 season came in a thrilling clash between Chelsea and Arsenal at Stamford Bridge, as the Dutchman scored a sublime hat-trick in an end-to-end encounter.

A pulsating clash had seen both sides share the lead and the game was poised at 3-3 with just five minutes remaining, before Van Persie scored twice in the final moments to secure a 5-3 win for the Gunners and claim the match ball.

After capitalising on John Terry’s slip to score his second, Van Persie lashed home a swerving shot to seal a stunning treble in stoppage time.

Arsene Wenger’s 1000th match in charge of Arsenal turned into a nightmare at the hands of the club’s London rivals, as Chelsea ran riot to record their biggest ever win against the Gunners.

Arsenal were two goals down inside seven minutes on a disastrous day at Stamford Bridge, with Samuel Eto’o and Andre Schurrle putting Chelsea in control.

Chelsea added a third through Eden Hazard’s penalty, in an incident that saw Kieran Gibbs mistakenly sent off despite Alex Oxlade-Chamberlain’s handball on the goal-line.

A punishing performance from Chelsea was extended with further goals from Oscar (2) and Mohamed Salah, as Jose Mourinho secured his biggest ever Premier League win as Chelsea manager and the Blues scored six against Arsenal for the first time in their history.

Jose Mourinho has never shied away from ruffling feathers and Arsene Wenger often found himself on the receiving end of less than complimentary comments from the former Chelsea coach.

Mourinho memorably branded Wenger a “voyeur” and a “specialist in failure” at the height of tensions between the two, a rivalry that reached boiling point as the two clashed on the Stamford Bridge touchline in October 2014.

It was little more than pushing and shoving from the opposition managers, with Wenger uncharacteristically losing his cool as Arsenal crashed to a 2-0 defeat.

The Frenchman could perhaps have done with his side showing a similar level of fighting spirit on another disappointing day in west London.