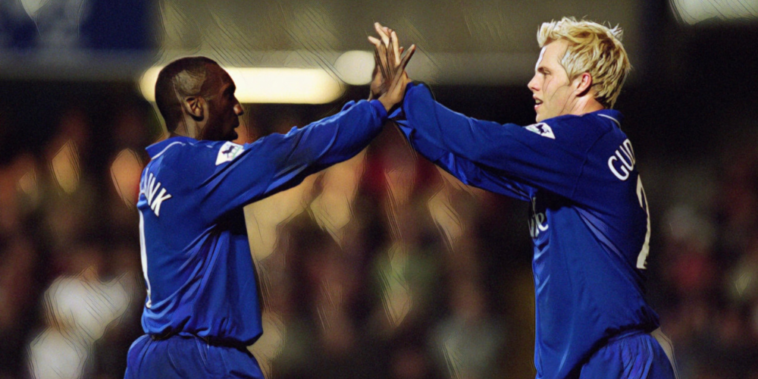 As Gianluca Vialli set about overhauling his frontline at Chelsea in the summer of 2000, even the former fans’ favourite could not have expected the success of his signings.

Jimmy Floyd Hasselbaink and Eidur Gudjohnsen had each been courted by rival clubs and whilst both were talented in their own right, their union in west London took each to even greater heights.

Hasselbaink was the headline arrival at Stamford Bridge and signed with huge pedigree. The Dutchman had won the Premier League’s Golden Boot at Leeds two seasons earlier, before a spell in Spain proved short-lived as Atletico Madrid were relegated to the Segunda División.

Chelsea were well aware of his talent and in search of goals spent £15m to bring Hasselbaink back to the Premier League, equalling the divisional record set by Alan Shearer’s move to Newcastle in 1996.

Gudjohnsen arrived in the same summer, though somewhat under the radar in comparison to his new teammate. The Icelandic forward had turned heads at Bolton Wanderers and rejected interest from Liverpool to head to the capital.

Each had been seduced by the prospect of working alongside Vialli, but within three months the Italian had departed. In came Claudio Ranieri and left each of the summer signings with a point to prove.

Hasselbaink had worked alongside Ranieri at Atletico Madrid and continued where he left off in English football with a spectacular first season, scoring 23 league goals to win the Premier League’s Golden Boot for a second time.

Gudjohnsen, in contrast, had to be patient given the presence of club great Gianfranco Zola, though scored a respectable ten goals during his maiden top-flight campaign.

His understanding with Hasselbaink was almost instant however, so much so that the Dutchman preferred the presence of Gudjohnsen to the brilliance of Zola.

“Technically absolutely magnificent, but the connection was not as good as us. The main thing was we wanted each other to do well. If he would score I would be so happy for him and vice versa.

“I would make my run and he would find me.”

Gudjohnsen also noted how their on-pitch relationship was evident from the infancy of their time together.

“Even in the first season we had games where it was obvious there was something special there,” he told Chelsea’s official website.

“We had big competition for places in the team with Franco. It wasn’t easy competing with one of the greatest players in Chelsea’s history. I had a lot of respect for him and he obviously had respect for me as well, and I felt it. He could see me and Jimmy had something special.

“Sometimes the three of us sat down and we said: “why can’t we all play together? Surely there is a way with the quality we have.” In the end it was obviously the manager’s decision.’

Their second season together was the apogee of their attacking alliance as the free-scoring forwards wreaked havoc on Premier League defences. Between them Hasselbaink and Gudjohnsen scored 52 goals across all competitions, with 37 coming in the league alone.

It’s often said that opposites attract and in Premier League partnerships it has perhaps never been more evident.

Hasselbaink was a formidable physical presence, barrel-chested and thunder-thighed. Rarely caring for subtlety, his was a game built on thunderous power and a shot which made even the bravest defenders wince in anticipation.

In contrast, Gudjohnsen was the calm to his teammate’s chaos. Dropping deeper in a more creative role, he excelled in picking passes between lines with his technical talent a perfect compliment to the free-scoring forward alongside him.

Power and poise, ferocity and finesse, fire and ice.

“Our styles of play complemented each other,” Gudjohnsen told Chelsea’s official website. “We were completely different as players. Jimmy was so powerful that it was almost just up to me: how could I find a ball to him, or where can I find him, or how can I take a touch where I see his run, and vice versa.

“Jimmy was underestimated. He was clever in the sense that he knew what he could and couldn’t do, and he knew how to use his ability perfectly. It was one of the most enjoyable times having him as a strike partner.

“Jimmy was an out-and-out striker. He bullied people, he had this unbelievable strike on him. If you talk about top, top players he is definitely in that bracket.”

December’s 3-0 win at defending champions Manchester United saw both on the scoresheet, whilst their burgeoning bond continued the following month as each scored a brace in a 5-1 thrashing of West Ham.

Hasselbaink ended the season as runner-up to Thierry Henry for the Golden Boot, the highlight of his season a perfect hat-trick in a 4-0 thrashing of Tottenham at Stamford Bridge.

Cohesive chemistry on the pitch extended off it, with the two forming a strong friendship. Away from football, the duo regularly attended London casinos together, squandering sizeable amounts of their Premier League pay-packets.

“We couldn’t look more different – a black Dutch guy from Suriname and a blonde boy from Iceland – but we are quite similar,” Hasselbaink told The Guardian in 2005.

“We like a good time and we started gambling because we were having trouble with our girlfriends. We didn’t want to go home so we went to the casino.”

The prosperity of their partnership continued into the 2002/03 campaign, a season which would have colossal changes for Chelsea. Facing financial implosion, a top-four finish – secured following a final day winners-takes-all clash with Liverpool – paved the way for Roman Abramovich’s transformative takeover.

Gudjohnsen and Hasselbaink had scored 25 goals across all competitions, a drop in output but a valuable contribution to the Chelsea cause.

That summer brought mass changes as the likes of Adrian Mutu and Hernan Crespo arrived in west London, an embarrassment of riches that saw Ranieri dubbed ‘The Tinkerman’ for his continued changing of his side.

Hasselbaink ended the season as Chelsea’s leading scorer as the Blues finished second and reached the Champions League semi-finals, but the arrival of Jose Mourinho saw the Dutchman ushered out the exit door in 2004.

As he took on a new challenge at Middlesbrough, his former strike partner remained to excel, winning back-to-back Premier League titles as Chelsea emerged as the division’s dominant force.

Gudjohnsen eventually departed to sign for Barcelona in 2006, winning both La Liga and the Champions League during three seasons in Spain in which he counted Lionel Messi, Thierry Henry and Ronaldinho among his teammates.

Whilst those names are among the greatest of the modern era, it is Hasselbaink who Gudjohnsen has often cited as his favoured teammate. It is a respect that is reciprocated, with their time in tandem one of the fondest periods in the club’s modern era.

“Eidur is a player on the ball. Turning out, passing; always finding a pass. He was always reading the game. He needs players to make space for him. He was always two steps ahead.

“I was not a technical player. I needed an Eidur. I needed someone like that, I knew how to make runs and find a little bit of space. I needed to face the goal.”

Excellent on their own, the two were exceptional in union. The former was a gifted goalscorer with a bludgeoning right foot, whilst the latter’s craft proved the perfect support act.

Hasselbaink and Gudjohnsen were opposites who came together to form a Premier League partnership greater than the sum of its individual parts.