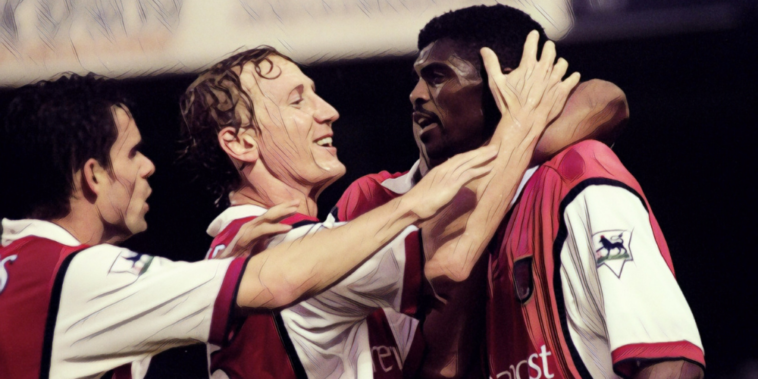 Kanu you believe it!? The unforgettable commentary spiel from Martin Tyler remains etched into one of the most memorable individual performances of the Premier League era.

There’s been no shortage of incident in the modern rivalry between Arsenal and Chelsea, the capital’s two most successful clubs having been regularly intertwined in their respective pursuits of success.

The London rivalry has consisted of five major cup finals since the turn of the millennium, whilst other memorable moments include Wayne Bridge’s bolt from the blue in a classic Champions League contest and the cross-capital defection of Ashley Cole.

The latest instalment in our Iconic Performances series revisits an epic encounter between the teams from October 1999, a period in which Chelsea hoped to threaten Arsenal’s status as the capital’s dominant force following a resurgence under Gianluca Vialli.

Four years before the transformative takeover of Roman Abramovich that changed the course of their history, Chelsea were a different beast to the Premier League behemoth the club has since become.

The west Londoners were, however, a club on the rise as a collection of exciting imports had helped lead the Blues to consecutive top-four finishes, after spending much of the Premier League’s opening seasons languishing in mid-table mediocrity.

Chelsea had finished third the previous season and had pushed both champions Manchester United and Arsenal close domestically, whilst Vialli’s side had begun the 1999/2000 season in positive fashion.

Chelsea had won six of their opening nine fixtures and were yet to concede a goal at home, a run that included a 5-0 thrashing of Sir Alex Ferguson’s treble winners at Stamford Bridge.

The clash shaped as a pivotal early-season meeting as Arsenal looked to challenge once again, the 1998 double winners having been beaten to the title by just a single point the previous season.

Arsenal’s recent title-winning season had marked the start of a new era under the guidance of Arsene Wenger, the Frenchman’s fusion of foreign imports and a resilient old-guard leading to a period of success in north London.

Kanu had arrived mid-way through the previous season following an indifferent spell at Inter Milan, having rose to prominence as part of Ajax’s Champions League winning contingent in the mid-nineties.

The Nigerian had began promisingly in the Premier League and started the new season in fine fettle, scoring four goals in 10 appearances and featuring regularly despite the presence of Dennis Bergkamp, Suker and summer signing Thierry Henry.

His first experience of the eight-mile trip to Stamford Bridge could hardly have begun worse however, as the in-form home side made most of the early running.

It was Chelsea who found the breakthrough in an ill-tempered clash that saw eight yellow cards brandished, adding to the 49 across the previous seven meetings between the capital rivals.

Dan Petrescu was afforded far too much room by a tentative Tony Adams, who found himself outnumbered down the right, the full-back’s floated delivery met powerfully by the forehead of Tore Andre Flo to open the scoring.

The home side continued to push forward after the half-time interval and doubled their advantage, Petrescu turning from provider to goalscorer after meeting Graeme Le Saux’s cross to head beyond Seaman.

Arsenal toiled for well over an hour without finding a foothold back into the game, though Kanu’s first intervention of the afternoon raised hopes of a comeback with just 15 minutes remaining.

As World Cup winning centre-back pairing Marcel Desailly and Frank Leboeuf desperately lunged to close the gap it was Kanu who reacted quickest, prodding a toe-poked finish beyond Ed de Goey to hand the Gunners a much-needed lifeline.

Chelsea’s advantage had become significantly less comfortable as the red shirts swarmed forward in search of an equaliser, the visitor’s pressure rewarded with a leveller seven minutes from time.

Overmars was the architect once more though this time with inventive intention, his cross somehow evading the outstretched leg of Gus Poyet and finding its way through to his Nigerian teammate inside a crowded Chelsea penalty area.

Kanu’s first touch was heavy, but it shifted the forward’s momentum away from the blue shirts in close proximity, whilst his second was a low crisp finish to beat De Goey at his near post and bring Arsenal level.

If the celebrations were notably muted for his first, his second saw the forward wheel away in delight as the pocket of travelling Gunners made their presence felt at the Bridge.

Arsenal’s comeback had rattled the home side and the final stages were played out in nervous fashion, both sides repeatedly squandering possession as the clash hung in the balance.

As the seconds ticked towards full-time it was Albert Ferrer’s mistake which contributed to one last twist in the tale, the Spaniard’s attempted clearance charged down by Kanu, with the ball ricocheting favourably into the forward’s path as the full-back took a tumble.

Wide on the left-hand side, Kanu looked into the penalty area for options, but was greeted by the onrushing De Goey with the goalkeeper making a panicked rush to cover Ferrer’s faux pas.

De Goey’s desperation only played into the hands of the often unconventional Kanu, who feigned to cross before dragging the ball round the goalkeeper’s lunge, a deflection fortuitously favouring the forward as kept the ball in play on the byline.

Round the challenge of Chelsea’s goalkeeper but presented with far from a gaping goal, the forward ignored overtures from Overmars and Suker on the edge of the area to write himself into the history books.

Desailly and Lebouef both closed the direct space between the Arsenal star and the Chelsea goal, with Dennis Wise and Celestine Babayaro adding further blue shirts between Kanu and a match-winner.

It mattered little, as one swing of the forward’s in-step bent an unstoppable finish beyond the despairing defenders and into the far corner, the acuteness of the angle raising the now infamous shriek from Tyler on commentary.

Kanu had singlehandedly turned defeat into victory within the space of just 15 second-half minutes, an incredible individual display that cemented his legacy in cross-capital derby fixtures.

Kanu scored just 43 goals across six seasons with the north London side, an underwhelming total when presented with the simplicity of statistics.

He was, however, a footballer capable of moments that bewildered and amazed in equal measure, his nimble footwork at odds with his long limbs and languid style, somehow simultaneously appearing both awkward and easy on the eye.

Kanu’s cult status amongst the Arsenal fan base is unquestioned, whilst his brilliance at the Bridge is a large part of his legacy and an iconic piece of Premier League folklore.