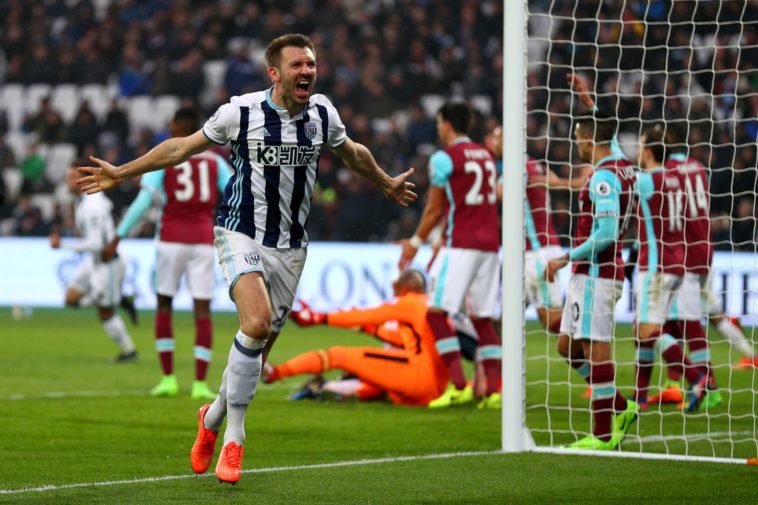 West Ham were left ruing their luck as West Bromwich Albion grabbed an injury time equaliser and left the London Stadium with a point after a dramatic 2-2 draw.

The visitors had a 1-0 advantage at half time thanks to Nacer Chadli’s close range effort which went in after only 6 minutes. Second half goals from Sofiane Feghouli and Manuel Lanzini seemed to have swung the game in West Ham’s favour, until Gareth McAuley’s header deep into injury time levelled the game.

The 2-2 draw means both teams remain in the top half of the Premier League with WBA in eighth place and West Ham slipping one position down to 10th.

Early frustration for the Hammers

The match started with the home side on the front foot and attacking from the off. Without the injured Andy Carroll the Hammers were reliant on the speed and trickery of Feghouli and Michail Antonio.

However, it was the visitors who scored first, as Chadli slotted home a goal from West Brom’s first attack. West Ham manager, Slaven Bilic was not happy, nor were many in the crowd, as it seemed the goal had stemmed from a foul on Feghouli.

West Ham then controlled long periods of the first half, but failed to find an opening as WBA defended stoutly. For all of their endeavour, it was the visitors who came closest to scoring the game’s second goal when Salomon Rondon hit the crossbar with a long range dipping volley.

Later in the half a Robert Snodgrass free kick had WBA goalkeeper Ben Foster scrambling to push the ball around the post for a corner. Soon after this near miss the Hammers did have the ball in the net only for Feghouli’s effort to be ruled out for offside.

Early play in the second half saw the home side yet again dominate possession for long periods, as WBA settled into a familiar pattern of deep defending.

On 63 minutes, the game changed as West Ham finally made the breakthrough their play had merited. Feghouli – possibly the home side’s man of the match – slotted home the equaliser to make it 1-1.

Lanzini’s shot had been tipped onto the crossbar by goalkeeper Foster and the Algerian was on hand to beat his team-mate Antonio to the ball and score from the rebound.

With only four minutes of normal time remaining, the home side struck again as Lanzini’s left-footed shot went in to make it 2-1. A home victory now seemed a distinct possibility and the home crowd came to life to make the final minutes a noisy and atmospheric period.

However, the dying minutes were to produce a dramatic twist. With only two of the five added minutes left to play West Ham defended poorly and conceded a corner.

Even goalkeeper Foster came up for the corner as WBA sensed this was their last chance to salvage a point. As the ball was swung into the box, WBA’s Jonny Evans rose highest at the far post, to head the ball into the net with the aid of a deflection off McAuley.

As the ball hit the back of the net silence descended on large parts of the London Stadium, save for the small section given over to the now jubilant away fans. Home fans and West Ham boss Bilic were frustrated with the late equaliser.

Commenting on the game Bilic said: “To concede like this, it is very frustrating. The decisions were big time against us, every one of them. It is hard for referees but when you are on the wrong side of all decisions it makes you very, very angry. The referee was very bad today.”