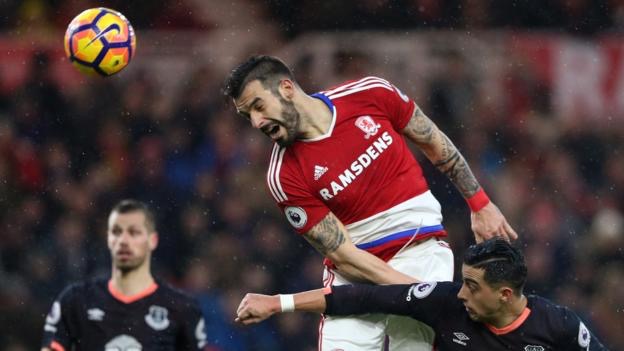 Middlesbrough and Everton played out a goalless draw at the Riverside, in a result that does little for either side.

After a great attacking performance against Bournemouth last week, Everton were looking on fire and sure to pick up the 3 points against a Boro side caught in the middle of a mid-season slump. To compare the two sides from the team selection you’d have to say it would be an easy performance for the Everton side with Boro only looking to limit their embarrassment. However this was clearly not the case.

With Gueye returning for the first time since leaving for the AFCON many assumed Everton’s midfield unit would be far too much for Boro to handle but this was not the case and was clear from the beginning.

Gueye himself looked incredibly unlike his usual self, giving the ball away on numerous occasions, not closing down and generally being a nuisance although this was primarily against Everton. He simply must still be not ready to resume Premier League action yet and his substitution on the 60th minute probably signified that Ronald Koeman can see this too.

Throughout the first half not many Everton players could really say that they performed at the same level as last time out with players being wasteful in possession and not pressing the Middlesborough players near enough. This allowed Boro to get into the game and from about the half an hour mark it looked as though only one team was scoring today and that was Middlesborough.

That isn’t to say that Everton didn’t have their chances, in fact they had the better chances throughout the game. However the players’ wasteful game had shown through. After scoring 4 goals last week you’d expect Romelu Lukaku to put Everton 1-0 up going one on one with Victor Valdes but just shot straight at him. Similarly teenager Ademola Lookman had a plethora of chances throughout the game and missed every single one, each becoming a worse miss than the last.

Notable chances include a nice bit of skill in the box but not getting a shot away at the expense of it but the most glaring was in the second half after being played in wonderfully by Ross Barkley in another one on one he simply smashed it at the goalkeeper and made it easy for Valdes. Perhaps this shows that Lookman simply isn’t as ready as we’d like him to be for the Premier League at this time. These missed chances cost Everton the 3 points and controversial as it may be to say others would’ve definitely scored.

Kevin Mirallas, Enner Valencia even Gerard Deulofeu would’ve no doubt buried these opportunities and won it for the Blues. This is the criticism that Lookman needs to take if he’s to play at the highest level at this moment. Tom Davies, a year younger than Lookman, is taking every game in his stride and once again had a great performance in the middle of the park today and Lookman should be looking at him and wanting to be better.

Mason Holgate another young player playing well made a mistake recently, and has sat on the bench because of it so perhaps this should also be Lookman’s destination for the next few games.

Throughout the game, especially in the second half, Boro dominated and embarrassed Everton to some degree. Lukaku was bullied out of the game in patches, Coleman and Baines became ineffective due to their full backs especially Fabio who I’d give MOTM, and their attackers completely showed the weaknesses of our defence. No doubt a team of better quality players would’ve scored 2 or 3 against Everton today even though, as he has been for the last few games, Joel was in good form stopping a great Gestede header near the end.

All in all a very disappointing performance from Everton and one that they’d like to forget. Got away with it and didn’t really deserve the draw in all honesty. If they want to challenge for Europe they need to be winning these games comfortably or else just forget about it. Currently as of writing they’re 5 points off 6th and could potentially end the day 7 points off. It seems that a European dream may be coming to an end sooner than we’d all expected.