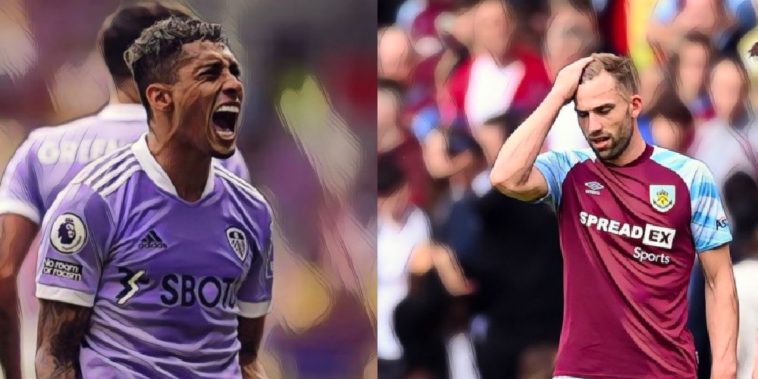 Burnley’s five year stay in the Premier League came to an end this afternoon after they suffered a final day defeat to Newcastle, while Leeds beat 10-man Brentford.

The final day of the Premier League season kicked off with both sides locked level on 35 points, though Burnley had a significant advantage in the goal difference column, starting the afternoon at -18 compared to Leeds’ -38 after what has been a leaky campaign at the back.

However, in the 20th minute, Burnley’s Nathan Collins was penalised for a handball in the area, with Callum Wilson stepping up to fire home the resulting penalty to put the Clarets into the drop zone.

Then, Burnley’s predicament worsened as Barcelona linked Raphinha emphatically despatched a penalty early in the second half to give Leeds breathing space.

At Turf Moor, Callum Wilson netted his second of the game. before Maxwell Cornet thundered an effort home to give Burnley a glimmer of hope, before Leeds were pegged back by a lovely Sergi Canos header to leave the relegation picture unsettled once more.

However, with Brentford down to 10 men following a second bookable offence by Canos, Leeds’ Jack Harrison ensured his side’s safety with a late strike from the edge of the box, with the West Yorkshire side finishing three points clear off their Lancashire rivals.

Speaking after the game, Leeds boss Jesse Marsch hailed his side’s character, while saying that he is still looking to implement his own style of play after taking over from Marcelo Bielsa earlier this season

WE ARE STAYING UP!!! pic.twitter.com/ApxMFL9s0H

“Hot day – not easy for either team,” he told Sky Sports. “We got the lead which was important, I thought the start was really good. When we were up two men we still didn’t want to leave it up to fate, we tried to push the winner to secure our fate. This group has been able to dig deep in injury time and find goals and the character is clear and it’s a privilege to work with these guys.

“We talked about how to play in the heat, how to manage the game, how to stay focussed for every moment. Weird that we gave up a goal when we went up a man. We tried to update the players on the Burnley score but the focus on us was most important. It’s hard to concentrate and be connected for 90 minutes on days like this but this is typical of our group – they never stop believing and it’s a credit to our mentality.

“It wasn’t easy to manage and I was trying to think of ways to help the group tactically and to be fair we have had good performances it’s just trying to put it all together hasn’t always looked perfect. The stress has been high for three months, I’ve tried to stay calm and focus on us and you see the quality of the mentality and character.

“There’s so much been said about Marcelo Bielsa v me and there’s been people counting us out, I get it, this is high level stuff, and fans pay attention all over the world. It’s not a perfect representation of what I want this team to be but in this situation we came together well and I still feel strongly about the group we have and the football we can play. We need to get better and add some pieces but I love this group, team, character, commitment and spirit.

“We were with our fans enough and I appreciate the fans singing my name but that’s not the important thing. We are Leeds United and that’s what we will always be as long as I am here – I love our fans but I don’t care if they sing my name. It’s important we are a committed group and show us that every time on the pitch.”

Meanwhile, there were contrasting emotions at Turf Moor, with James Tarkowski offering an apology to the club’s fans.

“We’re devastated but over the season we’ve not been good enough,” Tarkowski said. “We need to be better than we have been and we’ve got our just reqwards by not doing enough.

“We have had too many sloppy moments and not won enough matches. We’ve had an incredible run in this league against these teams and their budgets. It’s been a great achievement but that doesn’t mean we wanted it to end in the way we have done.

“There is never a lack of effort or desire from our team but we have just lacked individual quality in front of goal. We’ve given it our all. There is a great set of lads in there who’ve never given up but unfortunately we have come up short. It summed up our season.”

“The fans have been incredible ever since I’ve come here. They’ve been brilliant this season. It’s easy to turn against team when they are struggling but they have been with us all the way.

“I can only apologise we’ve not done enough this season.”