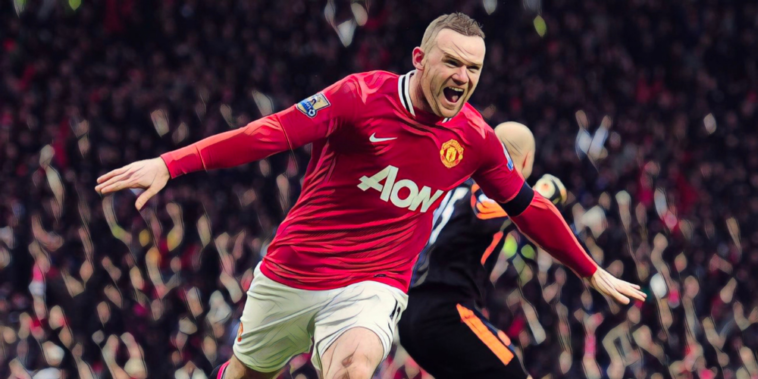 Manchester United has been home to some of the Premier League’s finest ever forwards, with a number of the division’s goalscoring greats having left their mark at Old Trafford.

The first two decades of the Premier League saw the Red Devils emerge as England’s dominant force, winning 13 league titles under Sir Alex Ferguson after being crowned champions in the division’s inaugural season.

The goals of the club’s finest footballers have propelled the side to silverware success and we’ve decided to look back at the most prolific single seasons in the Premier League era.

Here are Manchester United’s five top scorers in a single season since 1992/93.

Wayne Rooney is the second-highest goalscorer in Premier League history on 206 goals, becoming just the second player – after Alan Shearer – to reach 200 goals in the division.

Having burst onto the scene at Everton he signed for Manchester United in 2004, spending 12 seasons with the club and eclipsing Bobby Charlton as the Red Devils’ record scorer.

Among his finest seasons came during the 2011/12 campaign as Rooney hit 34 goals in all competitions, finishing as runner-up to future teammate Robin van Persie for the Premier League’s Golden Boot.

Rooney had taken over as United’s lead goal threat following the departures of Cristiano Ronaldo and Carlos Tevez, but his return was not enough to secure silverware as the Red Devils ended a season without a major trophy for just the third time in the Premier League era.

Rooney had reached 34 goals in a season for the first time in 2009/10, the joint-most prolific campaign of his club career.

The England international was named as the PFA Player of the Year and FWA Footballer of the Year after a career-best campaign, thriving with the added responsibility that came with the summer departure of Cristiano Ronaldo to Real Madrid.

🙌 One of England's finest pic.twitter.com/Gzm5MPuwau

He scored 26 goals in the Premier League to finish second in the Golden Boot standings, whilst his winning goal ensured silverware as Aston Villa were beaten 2-1 in the League Cup final at Wembley.

That was the sole silverware of the season, however, as United finished as runners-up in the Premier League to Chelsea. United – finalists in each of the past two seasons –  also exited the Champions League in the quarter-finals despite Rooney’s record of five goals in seven European appearances.

Ruud van Nistelrooy’s initial move to Manchester United was postponed for a year after the forward suffered a serious knee injury in 2000, but the PSV Eindhoven star certainly proved worth the wait after his arrival into English football.

Van Nistelrooy’s netted twice on his debut against Fulham and his first season saw him score 36 goals in all competitions for the Red Devils, performances which saw him named as the PFA Players’ Player of the Year.

Good morning to everybody, especially to Ruud Van Nistelrooy who, as it goes, loved plundering goals more than you love anything in your life; a *very* good morning to you.

His 23 league goals was the highest by a foreign player in their debut season at that time, whilst he added a further 10 in the Champions League as United reached the semi-finals.

Van Nistelrooy finished as the Champions League’s leading scorer – a feat he would replicate three times in just four seasons after his arrival in Manchester – and as the competition’s top assist provider.

Cristiano Ronaldo became the first footballer in Premier League history to win all six individual footballer of the year awards in 2006/07, before somehow taking his game to even greater levels the following season.

Ronaldo scored a stunning 42 goals in all competitions as United won a Premier League and Champions League double, including his side’s goal as Chelsea were beaten on penalties in the latter final in Moscow.

It was the first time Ronaldo scored 40+ goals in a single season, a goalscoring milestone he would incredibly reach in eight consecutive campaigns at the height of his time at Real Madrid.

Ruud van Nistelrooy holds the record for Manchester United’s highest scoring single season in the Premier League era, having scored 44 goals across all competitions in 2002/03.

The Dutchman scored 25 league goals to win the Premier League’s Golden Boot, hitting hat-tricks against Newcastle United, Fulham, and Charlton to lead Thierry Henry (24) and James Beattie (23) in a tight fight to finish as the league’s leading scorer.

Van Nistelrooy’s goals were crucial to United winning the league title, scoring in eight consecutive games to finish the season as the Red Devils came from behind to beat Arsenal to the Premier League.

The forward also scored 12 goals in just nine games to finish as the Champions League’s leading scorer for a third time, with only Denis Law (46 goals – 1962/63) having ever scored more for the club in a single season.

Van Nistelrooy’s 44 goals in a campaign is also a Premier League record, one he shares with Liverpool’s Mohamed Salah (2017/18).