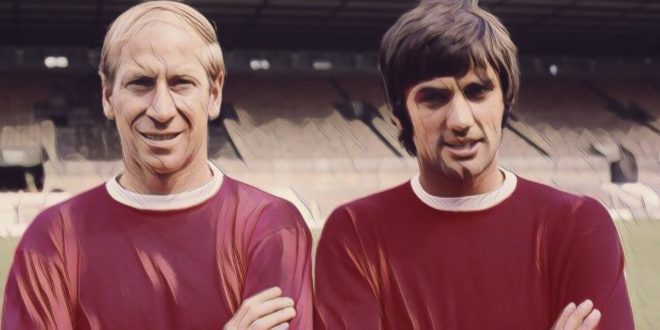 Harry Diamond 17/12/2019 Five of the Best, Opinion/Features Leave a comment

Manchester United’s remarkable record of producing home-grown talent reached a new milestone this weekend, the club’s clash with Everton at Old Trafford the 4000th consecutive game in which the club have fielded an academy graduate in their matchday squad.

Teenager Mason Greenwood fittingly scored the host’s goal in a 1-1 draw, the 18-year-old the latest bright hope from the continued production line of footballing talent.

The landmark game is an incredible achievement for one of world football’s biggest clubs, and we’ve decided to look back at some of the very best players to have come through the ranks, with a series of stellar names including the likes of David Beckham and Gary Neville unfortunate to miss out.

Here are five of Manchester United’s best ever academy graduates…

A tragic case of what might have been had it not been for heartbreaking circumstance, speak to those who watched or played alongside Edwards and they will speak unequivocally about the talents of a player who saw his career and life cut short due to disaster.

The Dudley-born player would come through the ranks at Old Trafford as part of a collection of youngsters nicknamed the ‘Busby Babes’, making his debut at just 16-years-old and in the process becoming the youngest ever player to play in the top division of English football.

International recognition would come two years later, and such was his impact there are many who believe Edwards could have become the greatest player of all-time, with Sir Bobby Charlton admitting the versatile midfielder was the biggest talent he ever witnessed.

Edwards would make 177 appearances for United, scoring 21 goals, before his life was tragically cut short following the Munich air disaster in 1958, initially surviving the crash before he sadly died of his injuries two weeks later aged just 21.

Another Manchester United player involved in the Munich air disaster, a young Charlton would be amongst the fortunate survivors of the crash before going on to play a key role as the club was rebuilt.

Spotted playing for East Northumberland schools, the North East-native would be signed by United as a 15-year-old in 1953 before breaking into the first-team and making an immediate impact, though it would not be until post-Munich where he would become a true great.

Under the guidance of Sir Matt Busby, Charlton would go on to establish himself as one of English football’s greatest ever players, helping the club to three league titles over the course of his career, as well as forming part of the side which won the European Cup in 1968, scoring twice in the final victory over Benfica.

Named as the Ballon d’Or winner after helping England to World Cup success in 1966, midfielder Charlton would score 249 goals in 758 appearances for United, both records at the time of his departure from the club in 1973.

A man possessing all the talent one could wish for, the Belfast Boy would delight adoring crowds with a style of football few others could replicate.

Brought over to England as a teenager, Best initially struggled with homesickness before returning to the club and becoming one of the greatest players in their history.

Handed his debut as a 17-year-old, Best would make a mockery of rough tactics designed to frustrate his showmanship style, his dribbling ability mesmerising and quickly making him a favourite with fans and media alike.

The winger would star as United claimed the league title in 1965, before helping the club be crowned champions again two years later. The following season he would help inspire his side to European Cup success, scoring in the final victory and later being named as European Footballer of the Year.

His extravagant off-field lifestyle may have prevented him from reaching even greater heights, though he remains one of the most iconic figures in Old Trafford history after scoring 179 goals in 470 appearances.

One of the greatest one-club men in football history, Ryan Giggs would spend over two decades in the first-team at Manchester United, becoming the most decorated player in the history of English football.

Bursting onto the scene as a prodigous teenage talent, Giggs would begin his career as a dazzling left-winger, ghosting past players and being named as the PFA Young Player of the Year in consecutive seasons, the first player in history to achieve the feat.

The Welshman would become a fundamental part of Sir Alex Ferguson’s side as they dominated the Premier League, winning four of the first five editions of the rebranded competition before a historical campaign in 1999.

That year he would help the club to an unprecedented European treble, scoring one of the greatest goals in FA Cup history against Arsenal in the tournament’s semi-final and playing a key role in their Champions League victory over Bayern Munich.

His later years would see him move increasingly central as his passing range and vision continued to thrive as his pace diminished, no player in Premier League history having registered more assists.

He would retire in 2014 after scoring 168 goals in a club-record 963 games, his list of honours including 13 league titles, four FA Cups and two Champions League titles.

Amongst a host of academy produced talent that would emerge at the same time, Paul Scholes would form part of the spine of a side that would dominate the Premier League for almost two decades.

Part of a group of players collectively referred to as the ‘Class of 92’, Scholes would break into the first-team in the mid-nineties alongside the likes of David Beckham, Nicky Butt and the Neville brothers.

Scholes was perhaps the most talented of the group, a midfielder capable of dictating the tempo of a game at will and possessing vision and a passing range few could match.

His earlier days would see him thrive as an advanced player, arriving into the box to score goals before dropping deeper in the latter stages of a United career that would last 20 years.

In that time Scholes would win 11 league titles, three FA Cups and two Champions League, scoring 155 goals in 718 appearances for the club.

The likes of Thierry Henry and Zinedine Zidane have spoken glowingly about their admiration for the midfielder, who should be regarded amongst the greatest the English game has seen.

Read: Rating every member of Manchester United’s fabled class of 92

Read Also: Best of the 2010’s – Premier League Team of the Decade