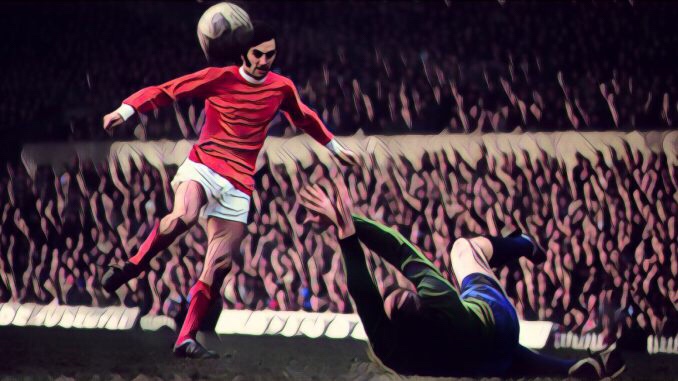 George ‘The Belfast Boy’ Best is widely considered, by those who had the privilege to see him play, to be the most naturally talented footballer of all time.

George’s career was blighted by controversy however, due to his well-publicised love of partying and women.

His colourful life both on and off the pitch, as well as his wonderful sense of humour, made for some of football’s most iconic quotes.

Here are 10 of our favourites …

07/02 – On this day in 1970, George Best scored six goals as Man Utd beat Northampton 8-2 in the FA Cup. He’s one of just two players to score 6+ goals in a game for the Red Devils. Genius. pic.twitter.com/GMYUNBzzDy

“They’ll forget all the rubbish when I’ve gone and they’ll remember the football. If only one person thinks I’m the best player in the world, that’s good enough for me.”

“If you’d given me the choice of going out and beating four men and smashing a goal in from thirty yards against Liverpool or going to bed with Miss World, it would have been a difficult choice. Luckily, I had both.”

“I spent a lot of money on booze, birds and fast cars. The rest I just squandered.”

“I used to dream about taking the ball round the keeper, stopping it on the line and then getting on my hands and knees and heading it into the net. When I scored against Benfica in the 1968 European Cup final I nearly did it. I left the keeper for dead but then I chickened out. I might have given the boss a heart attack!”

“Footballers today are millionaires by the time they’re 22 or 23. More and more of them are going out and looking for something to give them a buzz outside football, be it gambling, drugs or booze. I got my buzz from playing. Players now have a groin injury for months and months and I often think they don’t really give a toss whether they’re playing or not because they’re getting paid anyway.”

“I once said Gazza’s IQ was less than his shirt number and he asked me: ‘What’s an IQ?”

“Pelé called me the greatest footballer in the world. That is the ultimate salute to my life.”