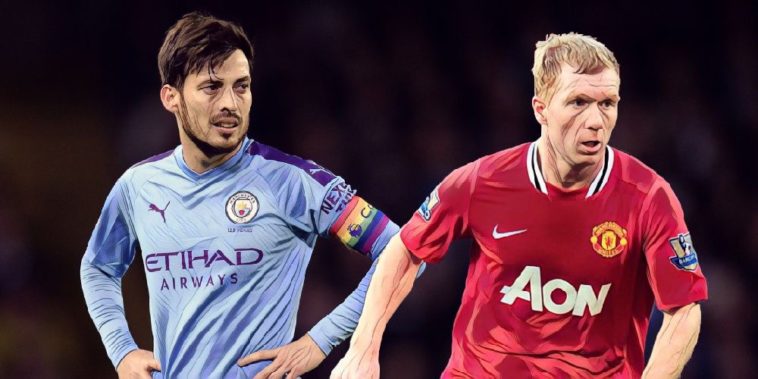 Manchester will come to a stop this weekend as the city rivals renew hostilities at Old Trafford, United facing Premier League champions City in a hugely anticipated derby fixture.

United have dominated the Premier League era and are the most successful league side in English football history, though there has been a shift in the balance of power over the last decade as the ‘noisy neighbours’ have risen to the summit of the game since their billionaire backing.

Ahead of this weekend’s blockbuster clash between the two sides, we’ve decided to compile a dream XI of the stars to have played for either side throughout the Premier League era.

Regarded by many as the greatest goalkeeper in Premier League history and a player to have represented both sides of the divide, Schmeichel earns his position in goal for our XI.

The ‘Great Dane’ would undoubtedly enjoy the best period of his career in the red half of Manchester, proving to be one of Sir Alex Ferguson’s greatest ever signings after arriving from Brondby.

Schmeichel would win five league titles and three FA Cups during a glittering eight-year career at Old Trafford, in addition to captaining the side to Champions League success in the absence of Roy Keane as part of the club’s famed treble-winning season in 1999.

The only goalkeeper to be named as Premier League Player of the Season, Schmeichel would later spend a single season at City via spells at Sporting Lisbon and Aston Villa, where he continued his record of having never lost a Manchester derby fixture.

Cool, calm and collected, Ferdinand would spend almost two decades at the summit of English football, playing with an effortless elegance that saw him rarely appear to step out of first gear.

Twice made the world’s most expensive defender before his 23rd birthday, the second of those moves would take him to Old Trafford from rivals Leeds, where his British record fee would prove to be worth every penny.

Ferdinand would prove to be the cornerstone of a Manchester United side that would continue to dominate both at home and abroad, winning nine major honours during a 12 season spell, including six league titles and the Champions League in 2008.

If Ferdinand brought the elegance and a touch of class, his partner at the heart of the defence would bring the dogged determination and bravery to make one of the greatest centre-back partnerships in Premier League history.

Physically formidable and a natural leader, Vidic’s uncompromising style made him a firm fans’ favourite amongst the Red Devils’ faithful, the Serbian willing to put his body on the line for the cause.

A dominant defender at his peak and club captain, he was twice named as Premier League Player of the Season during a career that delivered five Premier League titles and the Champions League.

Joining Ferdinand and Vidic in our back three is former Manchester City captain, Vincent Kompany, the Belgian having played a hugely influential role in the club’s rise to the elite over the past decade.

Kompany would sign from Hamburg and establish himself as a bargain buy during the most successful period in the club’s history, captaining City to four league titles and six domestic cups.

An indisputable leader of the modern City, Kompany often delivered in crucial moments for the Etihad club, memorably scoring crucial winning goals during title run-ins in 2012 and 2019.

Named as Premier League Player of the Season during that drought-breaking title win in 2012, Kompany made 360 appearances over an 11-year spell in the blue half of Manchester, scoring 20 goals.

Keane may endure a strained relationship with his former side, but that should not detract from his status as one of the most influential and greatest players in the history of Manchester United.

The former club captain was the inspiration behind some of the Red Devils’ greatest triumphs, acting as Sir Alex Ferguson’s on-field voice and establishing himself as the undoubted leader of the Scot’s winning-machine.

The Irishman was a ferocious competitor with an incensed will to win, raising the standards of those around him with his energy, drive and full-blooded commitment.

Few can forget his inspired performances as United reached the 1999 Champions League final, whilst he would win 17 major honours during a glittering Old Trafford career.

Part of a collection of home-grown individuals to rise through the club’s ranks and star in the first-team, Scholes is regarded amongst his peers as one of the greatest midfielders the game has seen.

Described as ‘untouchable’ by Zinedine Zidane and as the Premier League’s best-ever player by Thierry Henry, a list of sporting testimonials to the Oldham-born star is evident of his capabilities.

Few talents have possessed his game intelligence or passing range, Scholes evolving from goalscoring midfielder into deep-lying playmaker as he reached the twilight of his career.

His list of accolades include 11 league titles, three FA Cups and two Champions League titles; his stunning semi-final winner against Barcelona remembered fondly during the latter of those European successes.

In an often stat-obsessed modern footballing world, it can be good to reflect upon understated brilliance and that is exactly what David Silva has brought to Manchester City over the past decade.

Players have come and gone under Sheikh Mansour’s regime at the Etihad, but one constant over the past ten years has been their conductor-in-chief, a diminutive Spaniard known affectionately as El Mago, the Magician.

The inspiration of Kompany and goalscoring exploits of Sergio Aguero may take the headlines, but Silva’s effortless ability to dictate the play has made him a stand-out figure in four title-winning teams.

Five League Cups and two FA Cups have also been added to an extensive silverware collection, Silva having scored 73 goals in 423 appearances for the club.

Regarded by many as the greatest player in City’s history, only six players have registered more than his 90 Premier League assists.

Stationed on the right-side of our uber-attacking line-up, it is fair to say we will relieve the fleet-footed Cristiano Ronaldo of his defensive duties in this all-time Manchester derby Premier League XI.

One of the greatest footballers to have played the game, Ronaldo would begin his journey to superstardom in the Premier League at Manchester United, evolving from a raw but talented teenager into arguably the best player on the planet.

During his time in English football, Ronaldo would inspire United to three consecutive Premier League titles, the second of those successes coming in addition to the Champions League in 2008, Ronaldo winning the Ballon d’Or for the first time after scoring 42 goals in all competitions.

He would win a PFA Player and FWA Footballer of the Year double in successive seasons in 2007 and 2008, before departing for Real Madrid in a world-record deal having scored 118 goals in 292 United appearances.

The most decorated footballer in the history of English football, the success of Ryan Giggs’ Manchester United career is one that is unlikely to ever be surpassed.

The Welsh winger would emerge as a precocious teenager and instantly endear himself to the club’s supporters, Sir Alex Ferguson once describing Giggs as leaving defenders with ‘twisted blood’ for his ability to fly past opposition full-backs.

He would become the first-ever back-to-back winner of the PFA Young Player of the Year award in the early 90’s, before winning the senior award in 2009 following a remarkable career of longevity at the highest level.

His list of honours include a barely believable 13 league titles, in addition to four FA Cups, three League Cups and two Champions League titles, whilst his record of 162 Premier League assists is the most in the division’s history.

Few players are as revered at Manchester United – or any club for that matter – as Eric Cantona.

The French forward would prove to be the inspiration behind United’s return to the top of the English game, his signing from Leeds the catalyst behind the club’s first league title in 26 years before a further three championships over the next four seasons.

Twice named as Player of the Year, Cantona’s achievements were all conducted with trademark upturned collar and a swagger that marks him out as one of the most iconic figures in Premier League history.

His name is still regularly sung upon the terraces at Old Trafford following a career of magical moments.

The highest-scoring foreign player in Premier League history, few players have had as great an influence on Manchester City’s modern successes as Sergio Aguero.

The Argentine star would announce his arrival at the Etihad with a stunning debut performance at Swansea before firing the club to a drought-breaking title, scoring the most iconic goal in the competition’s history to snatch to the 2012 championship in stoppage-time on the final day of the season against QPR.

That moment alone wrote Aguero’s name into the history books, but he has continued to write chapters into his legacy during a prolific nine-year stay in Manchester, becoming City’s all-time record goalscorer in addition to winning four league titles and seven domestic cups.

This season saw him eclipse Thierry Henry as the greatest foreign goalscorer in Premier League history, whilst also moving ahead of Alan Shearer’s hat-trick landmark for the most ever trebles.

Currently the fourth-highest goalscorer in the league’s history, no player to have scored over 100 goals can match either his goals-per-game or minute-per-goal ratios.