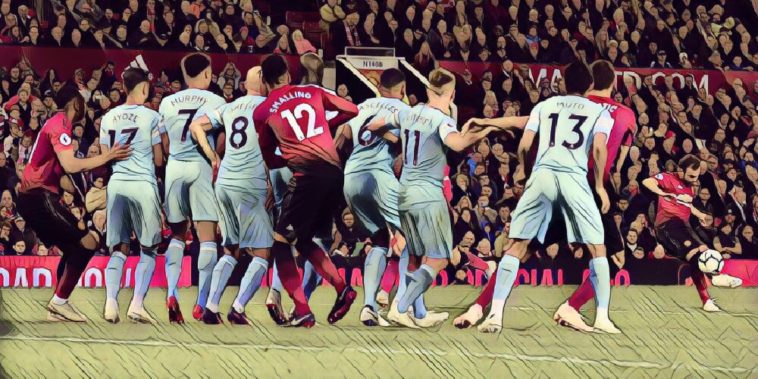 In a stunning game, Manchester United produced a brilliant fightback from 2-0 down to win 3-2, with an Alexis Sanchez header sealing the win, and possibly saving Jose Mourinho’s job.

Against a backdrop of turmoil, Mourinho’s men got off to the worst possible start, conceding twice in the first 10 minutes to Kenedy and Yoshinori Muto. Reeling from that nightmare opener, the Red Devils sleepwalked through the rest of the half, and in the end were lucky to reach the interval with only a two-goal deficit.

Manchester United’s fightback was kicked off by a wonderful free-kick from Juan Mata in the 70th minute. Six minutes later, Anthony Martial and Paul Pogba played a beautifully weighted one-two, and the former lashed home to equalise from just inside the penalty area. With the clock ticking into added time, and Old Trafford roaring them on, United surged ahead through the much-maligned Alexis Sanchez, who planted a header past Martin Dubravka to seal a much needed three points for United.

Here are five things we learned from the game…

For all his faults today, including his choice of starting personnel, one decision Mourinho got spot on was his substitutions. Nineteen minutes into the game, without United all at sea, and 2-0 down, Eric Bailly was hooked, with Juan Mata being sent on in his place. The tactical change gave United an extra creative force and dropped Scott McTominay further back. When McTominay was pulled at halftime for Marouane Fellaini, Nemanja Matic and Paul Pogba took turns helping out at the back. Mata and Sanchez grabbed goals, while Fellaini gave United an additional physical presence in the final third, justifying Mourinho’s decisions. His team selection may have set United up to lose, but his reaction to going two down won United the game in the end.

Eric Bailly has played himself out of the team

What does it say for United’s centre-back options when the second half started off with a back three of Matic, Pogba and Chris Smalling?

Perhaps United would not be amiss playing Matic there permanently. Eric Bailly’s performance was so poor he did not even last twenty minutes. It is difficult to see the Ivorian getting the nod in the Premier League again; this was his first start since the debacle against Brighton. Bailly’s style is thrilling and aggressive when successful, but too quickly devolves into chaotic and panicked when things are not going his way. Injuries and inconsistency have hampered his development, and his performance today may have relegated him down the pecking order once again.

Lack of investment will get Newcastle relegated

Newcastle’s lack of investment was plain to see in the second half. Rafael Benitez’s side, living off scraps thanks to Mike Ashley’s tyrannical ownership, were brilliant in the first half. They were filled with menace and drive on the counterattack, and tore at the heart of United’s shaky defence.

As the game wore on, and they were put under pressure, their midfield began to wilt under pressure. As Man Utd were able to bring on fresh faces to shake up their attack, Benitez must have looked to his bench and realised that he had no options to stem the flow. All the hard work of the first half was undone because Newcastle tired, and eventually the pressure paid off.

There is a genuine threat of relegation looming over the club. If Matt Ritchie and Jonjo Shelvey are ever forced to take time off due to injuries, there is no one that can step up to take their place. It is a shocking state of affairs for the club from Tyneside.

Can this result kickstart the season for Mourinho and Alexis?

24 hours before kickoff, the football world was abuzz with the news that Mourinho would be fired following the Newcastle game – regardless of the result. One of the millstones hanging around his neck was the form of Alexis Sanchez, who had flattered to deceive since his big move from Arsenal.

With the score at 2-0, the obituaries were being typed up, and the irony of Mourinho being ousted by an old enemy in Benitez was lost on no one. By the end, through the exhilaration of a late win, there was renewed hope that this game might be the Mark Robins moment for both Mourinho and Alexis, who notched his first Premier League goal of the season. In the end, it may just be a stay of execution, but maybe, just maybe, there is a semblance of hope for this season yet.

Dubravka is a bargain

Newcastle may have thrown away their lead sooner if it was not for the heroics of Martin Dubravka. The Slovakian goalkeeper, who made his six-month loan a permanent signing over the summer, has been fantastic for the Magpies.

Today, his saves kept Man Utd at bay for as long as possible, and he will be a key player if Newcastle are to survive relegation.

He possesses an impressive command of his penalty area, and his shot-stopping reflexes are excellent. In a market where Alisson and Kepa’s signings have broken the record for the goalkeeper, Newcastle have pulled off an absolute bargain picking up Dubravka for just €4 million. It remains to be seen if he can save Newcastle from the drop.