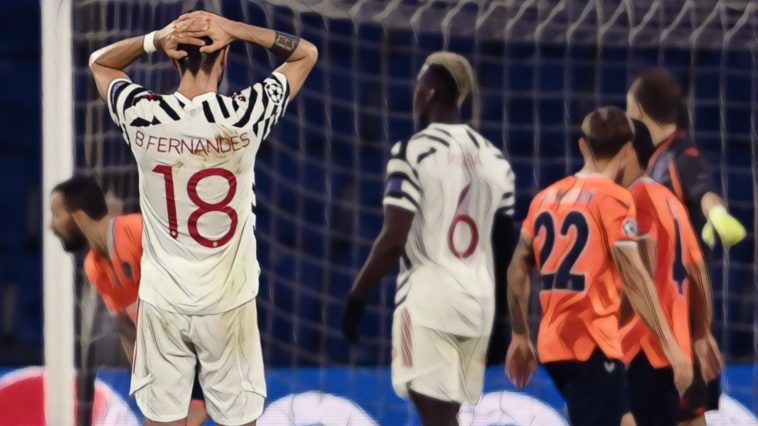 Just when you think it’s game over, that there’s no way back, and the ground is being set for a big name manager to take his place, Ole Gunnar Solskjaer pulls a big win out of his back pocket to save himself from the seemingly inevitable sack.

It’s happened so many times now that it’s almost comical, reminiscent of The Simpsons episode ‘Homer Defined’. Homer becomes a hero after saving Springfield from nuclear disaster, but his heroics are, of course, a complete fluke, the result of a game of eeny, meeny, miny, moe.

It would be a disservice to the Manchester United manager to reduce his relative successes to blind luck, but it is utterly confounding that a team can look imperious against the likes of Paris St. Germain, RB Leipzig and Everton, but be so toothless against a side like Istanbul Basaksehir.

Why do they oscillate so often between brilliant and brutal? Against Leipzig, they were scoring for fun, but in Turkey they were embarrassingly poor in front of goal.

Everyone pointed and laughed at the ridiculous situation that led to Demba Ba’s goal, with no one defending their own half of the pitch as Istanbul countered from a corner, but that wasn’t even the most worrying aspect of the performance. The fact that United had no shots – not one! – from open play in the opposition box while chasing a game was the biggest indication yet that their attack is not equipped to effectively break down organised defences.

One ball over the top and Ba was in 😳

WHERE IS THE MANCHESTER UNITED DEFENCE? 🧐#UCL pic.twitter.com/ueOLfPehFp

There have been several moments during Solskjaer’s reign where he seemed like a dead man walking, but this felt like a nadir. Istanbul have experienced defenders such as Martin Skrtel and Rafael, a former United man himself, but they were average Premier League players years ago, let alone today.

So it was reasonable to suggest that another bad result or two would see the Norwegian booted out the door. Then they go and handily beat Everton in the Premier League to redeem themselves and their boss. Solskjaer did an excellent job of deflection in his post-match interview, too, by attacking the fixture schedule, and all talk of job insecurity disappeared (for now).

This is very much A Thing now, something we come to expect while Solskjaer is in charge, but it’s also emblematic of a wider cycle from which the club are incapable of escaping.

Ever since Alex Ferguson retired, United have lurched from manager to manager with little or no direction, identity or sense of purpose. Each appointment has been made with the hope, rather than the clear, well thought out intent, of returning them to their perch.

But the end result, and the path en route, is always the same. A new manager is hired, the club sign a number of players they want, and they reach the top four. That progress isn’t built upon, resulting in regression and failure to meet expectations. Eventually, the manager is let go for poor performances.

The manager will always get the bulk of the criticism, but the reality is that it matters little who is in charge of the first team – the last four managers have an average win rate of 54.5% – because the cycle will continue with relentless consistency.

So long as the overall structure remains in place, nothing will change. The lack of real football people in the decision-making processes has been well documented and that is unlikely to change anytime soon.

It’s been suggested that hiring a director of football, something United has never officially had, would make the world of difference. And it might. But having a sporting director alone is not enough. Plenty of clubs have had them and many have been abject failures. Why would United be any different, particularly with Joel Glazer’s fingerprints all over every move?

In any case, Solskjaer is the de facto director of football, leading the club’s direction. Giving someone two jobs when he is already limited at one is unwise, but he has at least focused the club’s recruitment and transfer business. The deadwood has been steadily moved on, while the squad has been improved in key areas since he first arrived.

And yet, he has still been let down by those above him in the organisation. A highly-anticipated move for Jadon Sancho was, to put it mildly, mismanaged. Aside from the signing of Donny van de Beek, whose position on the pitch is already well accounted for, they left the rest of their business until very late in the window.

There is plenty of blame to go around for the lack of recent success, not least for the players. But so many great talents have passed through without leaving a mark that it makes you wonder. Juan Mata has wasted his best years at Old Trafford. Paul Pogba is on the same path. Angel Di Maria. Alexis Sanchez. Henrikh Mkhitaryan. Memphis Depay.

All of them have played their worst football at United but excelled elsewhere. That is as good an indication as any that the problem runs right through the club, and responsibility doesn’t lie with any one coach, player or person in upper management, even Ed Woodward. My feeling is that ultimately nothing will change while the Glazers own the club.

Solskjaer isn’t the first manager to encounter these systemic problems, and he won’t be the last one to suffer as a result of them either. My colleague Vishnu Anandraj believes Mauricio Pochettino is the saviour to bring Manchester Bloody United Football Club to salvation, that he will finally break this unending cycle of mediocrity.

And he might well. He is a brilliant manager with a winning mentality and distinct philosophy. But it’s far from a guarantee and it feels almost inevitable that he will be hamstrung in some way, incapable of reaching his full potential as a leader in such an environment.

No matter who is in the dugout, the cycle will trundle along with little or no change. That is the most frustrating thing of all.

See Also: Why Liverpool’s defence of their title will be horribly undone by their defence