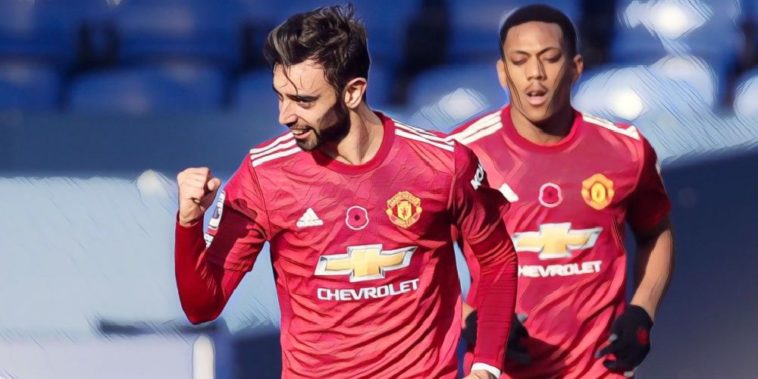 Manchester United got back to winning ways with a 3-1 win over Everton, Bruno Fernandes central to the win to help ease the pressure on Ole Gunnar Solskjaer.

It was an even opening period between two sides who had both lost their last two outings, but it would be Everton who would take the lead on 20 minutes.

A route one, long ball from Jordan Pickford was aimed in the direction of the physical Dominic Calvert Lewin, and his flick-on dropped to the diminutive Bernard, who was afforded enough time to get a shot off, his low effort creeping past David de Gea at the near post.

Manchester United upped their tempo after the opener, and within four minutes they were level. A floated ball from Luke Shaw down the left found the unmarked Bruno Fernandes, the 26-year-old attacking the ball and excellently guiding his header into the top corner past Pickford.

Seven minutes later and United were ahead. Marcus Rashford played a give and go with Fernandes who floated the ball back into the middle towards Rashford. The England striker looked like he had nodded the ball into the back of the net off the right-hand upright, though replays showed he didn’t get a touch, Fernandes credited with the goal after his lofted pass went all the way in having left Pickford flat-footed.

Everton improved after the break, though didn’t test De Gea, the Blues’ only shot on target being the one from which they scored, the Toffees really lacking quality in the final third.

Carlo Ancelotti’s side mounted one final attack in the last minute of stoppage time, but it was easily dealt with by United’s defence and man of the match Fernandes lead a rapid counter-attack as the Portuguese drove towards the edge of the Everton box, before slipping in Edinson Cavani who did what he does best as he stroked the ball past Pickford for his first goal in English football.

The result eases the pressure on Solskjaer, though the Norwegian was visibly furious at the early kick-off time following his sides midweek travels to Turkey –  United picking up a couple of injuries at Goodison Park.

“We were set up to fail,” Solskjaer fumed to BT Sport. “The kick-off time set us up to fail. We have been to Turkey, played loads of games this season already, we got back Thursday morning and we are playing Saturday lunchtime, it’s an absolute shambles.

“These boys deserve better. Luke Shaw has got injured because of it. It’s a hamstring which might be a long one and Marcus Rashford might be struggling.

“The authorities set us up to fail, who is responsible? We’ve had enough of that. Players this season, in these times, a pandemic, mentally and physically it’s draining. Let us play on a Sunday, there’s an international break after this, it’s a joke.”

"The kick-off time set us up to fail."

"It's an absolute shambles. The boys deserve better."

Ole Gunnar Solskjaer is furious that Man Utd have had to play on Saturday afternoon having played in Turkey on Wednesday night.

Solskjaer offered very little analysis about his side’s performance, though he was pleased to see deadline day signing Cavani notch his first goal in the famous red shirt.

“The players were brilliant. Cavani is getting better and better,” he said.

United next face West Bromwich Albion following the international break before hosting Istanbul Basksehir in the Champions League as the fixtures continue to come thick and fast.