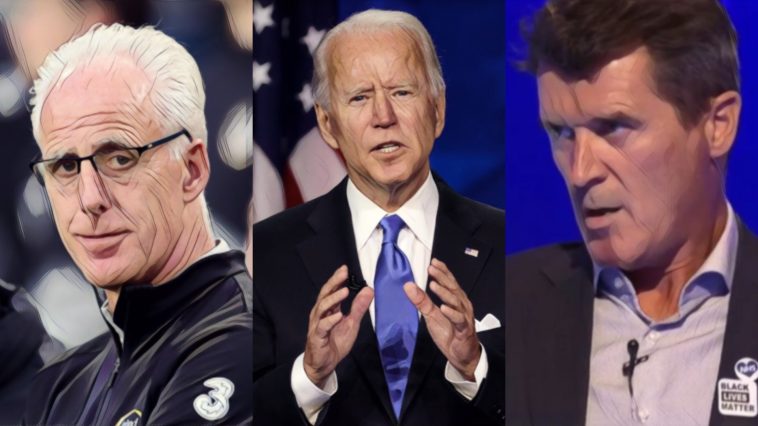 The funniest tweets from the world of football this past week, featuring some dodgy football analogies about the US Presidential election, rare footage of Roy Keane losing the rag at Alex ferguson during a Man United table quiz, and Mick McCarthy’s latest job in football management.

We really could have used someone to explain the complexities of the Electoral College.

They really should have got this guy on in hour one of election night to fully explain the whole process. pic.twitter.com/iYk7M0xYVz

Those were the days.

In normal times, Sky Sports News would be doing a whistlestop montage of a dozen Premier League managers giving their opinions on the US election at their Friday press conferences. General conclusion: "It is what it is", with a bonus "I just hope they can get it sorted out"

PEP 💬 @aguerosergiokun is not ready. Not yet.

It’s an important game, but like the US Presidential Election, all the votes must count. There’s a lot of games to play.

This is how lowly Newcastle fans think of Alan Pardew.

Donald Trump winning a second term would be the only eight year deal worse than Alan Pardew's Newcastle contract.

The football analogies were a little strained.

Biden has scored in injury time in Pennsylvania to lead.

Donald Trump’s claims to a moral victory were undermined.

Trump claiming the xG win despite getting hammered

But Joe Biden was the clear winner in the end.

The former reality television star will need to do the circuit before getting a new job.

Given President Trump looks likely to be out of work shortly, I fully expect to see him on Monday Night Football in January.

Does this answer the age old debate over whether Liverpool is red or blue?

A banner reading ‘World Knows Trump Won #MAGA‘ has been spotted flying above Goodison Park and the Liverpool area.

Like Trump, Southampton didn’t want the count to go any further.

And before this is no longer topical, here’s that amazing clip of Donald Trump picking out the teams for the League Cup draw in 1992.

Here's Donald Trump, completely out of his depth, helping Saint and Greavsie do the draw for the 1992 Rumbelows Cup. Have a wonderful afternoon. pic.twitter.com/o9r2QhDuGv

Old tape footage of a Manchester United team bonding table quiz from two decades ago. Good laugh watching Roy Keane lose the head as the coaching staff rack up all the correct answers. Keane believed the quiz to be fixed. He simply didn't like losing that man. pic.twitter.com/XePATxPp0A

And we might as well end the week on a happy note.

The moment they've all worked towards! 🏆🙌

See Also: Why Liverpool’s title defence will be horribly undone by their backline