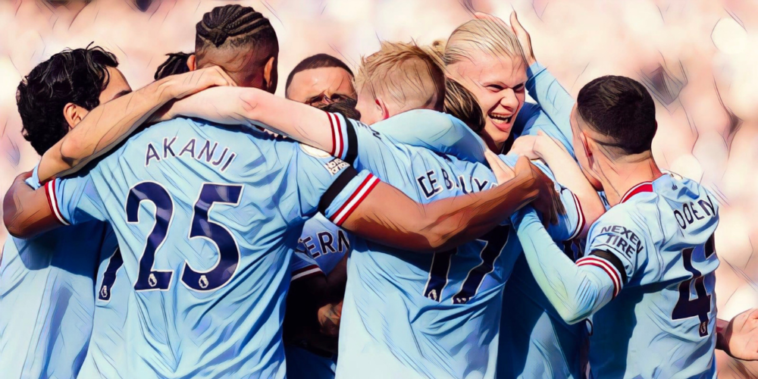 Manchester City are the last remaining unbeaten team in the Premier League this season and will be hoping to extend that record against Southampton this weekend.

Last weekend’s Manchester derby win has increased confidence around the Etihad, ahead of a clash with a Saints side who have made a stuttering start.

Here is all you need to know about Saturday’s contest.

Manchester City appear to be approaching top gear after a run of five consecutive wins in all competitions, a sequence which has seen Pep Guardiola’s side score 20 goals and concede just four.

City were ruthless in thrashing Manchester United 6-3 last weekend, as Erling Haaland and Phil Foden each scored hat-tricks in an unforgettable Manchester derby success. The former’s exploits this season have been well-documented and his mind-boggling haul was improved in midweek, as Haaland scored twice in the Champions League to make it 19 goals in just 12 games this season.

He has failed to score in just one game in all competitions and after being substituted at half-time in midweek will take on the Saints relatively fresh. Another positive for Guardiola has been the performances of Jack Grealish, who appears to be growing into his role at the Etihad.

The England winger was excellent in midweek despite failing to register a goal or assist, following strong recent performances against United and Wolves.

Southampton arrive at the Etihad on a run of three straight losses, with Ralph Hasenhuttl’s team hovering just a point above the Premier League’s relegation places.

Despite encouraging signs from a centre-back axis of Armel Bella-Kotchap and Mohammed Salisu, the duo remain raw and inexperienced and the Saints have failed to keep a clean sheet in eight games this season.

Southampton will need to address a wretched recent record in this fixture having failed to beat City in the last 13 meetings between the teams at the Etihad in all competitions. The Saints have also been poor travellers of late and have lost five of their last six Premier League away games.

Manchester City advanced to the semi-finals of the FA Cup with a comfortable win on the South Coast in March.

Ralph Hasenhuttl’s side were competitive across the opening hour at St Mary’s, but the class and pressure from the visitors told with a late salvo sealing progress to the last four.

Aymeric Laporte’s own goal had levelled for the Saints after Raheem Sterling’s early opener, before Kevin De Bruyne scored from the spot to restore City’s advantage after Mohammed Salisu’s rash challenge on Gabriel Jesus.

Phil Foden came off the bench to score a sensational third for City and the rout was completed when Riyad Mahrez netted a fourth late on.

Man City vs Southampton will not be broadcast live on television to a UK or Irish audience. You can listen to the game on talkSPORT 2.