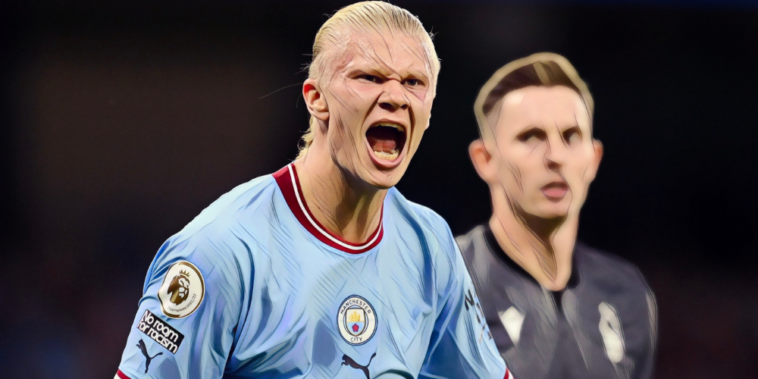 It’s far from exaggeration to say that Erling Haaland has taken the Premier League by storm. Never before has a footballer had such an immediate impact upon arriving on these shores, with Haaland continuing his stunning start with a Manchester derby hat-trick this weekend.

Haaland has now scored a staggering 14 goals in just eight league games for Manchester City, nine of which have come as part of three hat-tricks scored in consecutive home fixtures.

It’s taken him just eight games to reach three trebles in English football, a mind-blowing statistic made even more astonishing when compared against the fastest footballers to have previously reached the landmark.

Andy Cole burst onto the scene with Newcastle during the 1993/94 campaign, as his goals fired the newly-promoted Magpies to third in the Premier League.

Cole scored a record-breaking 34 goals during that campaign, a haul which earned the forward the PFA Young Player of the Year award and Premier League Golden Boot.

Cole scored two hat-tricks during that season, including all three goals in a memorable 3-0 win over Liverpool at St James’ Park. His form soon attracted interest from Manchester United, who secured his signing in a British transfer record £7m deal in 1995.

His third hat-trick came in his 65th appearance in the division, as he became the first Premier League player to score five goals in a game during a record 9-0 win over Ipswich Town at Old Trafford.

Cole ended his career with five Premier League hat-tricks and is the fourth-highest goalscorer in the division’s history, with 187 top-flight goals.

Torres signed for Liverpool from Atletico Madrid in 2007 and enjoyed a stunning debut campaign for the Reds as he scored 33 goals in all competitions.

His 24 league goals saw him break Ruud van Nistelrooy’s record as the most prolific foreign goalscorer in a debut season in England, while he became the first Liverpool player since Robbie Fowler in 1995/96 season to score 20 league goals in a season.

Torres scored hat-tricks against Middlesbrough and West Ham during his debut campaign and added a third Premier League treble in a 6-1 thrashing of Hull in September 2009.

After his initial move from PSV Eindhoven was delayed following a serious knee injury, Van Nistelrooy hit the ground running upon his switch to Old Trafford.

He was named as the PFA Player of the Year following a brilliant debut campaign in 2001/02, before setting a Premier League record with 44 goals in all competitions – winning the division’s Golden Boot in the process – the following campaign.

Van Nistelrooy’s first hat-trick came in a 6-1 win over Southampton at Old Trafford, while he also memorably netted three times during a thrilling 5-3 win over Newcastle in November 2002.

Van Nistelrooy scored 95 goals in just 150 league appearances for the Red Devils, before a move to Real Madrid in 2006.

Michael Owen’s exciting emergence was one of the stories of the late nineties, with the Liverpool teenager winning back-to-back Premier League Golden Boots.

Owen announced his arrival with a debut goal for the Reds and was almost immediately a key figure for both Liverpool and England.

The frightening phenomenon that is Erling Haaland is showing no signs of slowing down, with his hat-trick in the Manchester derby re-writing yet more records.

Haaland struck three goals as Pep Guardiola’s side mauled their Mancunian rivals at the Etihad, with Phil Foden hitting a hat-trick of his own in a 6-3 win for the Premier League champions.

It’s now 14 goals in just eight league games for Haaland who has become the first Premier League player to score three consecutive home hat-tricks. His three Premier League trebles are already equal to the career totals of Didier Drogba, Nicolas Anelka, Cristiano Ronaldo, Robbie Keane and Ole Gunnar Solskjaer and he has achieved this by the first weekend of October.

Not one, not two but 𝗧𝗛𝗥𝗘𝗘 @premierleague hat-tricks in consecutive home matches for @ErlingHaaland! 🤯

Owen’s record as the fastest footballer to reach three Premier League trebles had stood for more than two decades. It has taken Haaland just 639 minutes to make it tumble.

This is a special footballer who is already shifting the goalscoring boundaries of what was deemed possible.