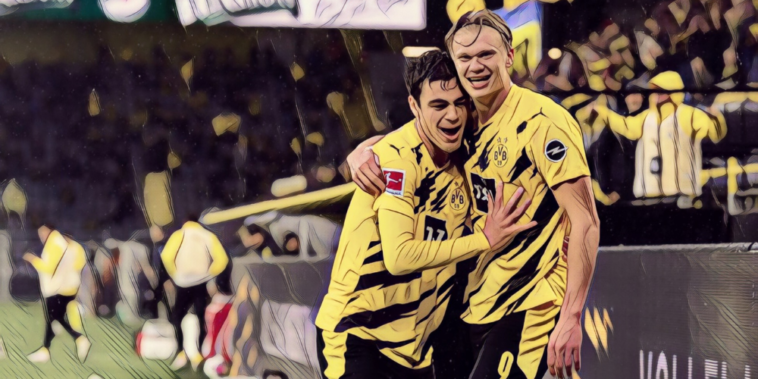 Pep Guardiola’s side are the favourites to secure a third Premier League title in just four seasons after opening up a 10-point advantage at the top of the division, though attentions are turning towards the summer transfer window and a potential raid on the Bundesliga.

Dortmund are currently in possession of some of world football’s brightest talents, with Haaland having emerged as arguably the best young player in the game since moving to Germany from Red Bull Salzburg last year.

The Norway international has scored 43 goals in just 43 appearances across all competitions, his eight goals in this season’s Champions League campaign making him the leading scorer in the competition.

Haaland was linked with several leading clubs before signing for Dortmund in January 2020, though his stock has continued to rise sharply with a number of the continent’s wealthiest clubs keen to prise him from the Westfalenstadion.

The 20-year-old has a release clause in his contract that will become active in 2022, though there are suggestions Dortmund may look to cash-in on the forward for a higher sum than the €75m they will be obligated to accept next year.

Dortmund are facing financial pressure as a result of the ongoing pandemic and are at risk of missing out on Champions League qualification, a host of Europe’s elite monitoring developments ahead of a raid on the club’s best talents.

Chelsea, Liverpool, Manchester United and Real Madrid have all been linked with Haaland, though City are now understood to be considering a bid in excess of £100m to sign both the forward and Dortmund teammate Reyna.

According to 90min, the double deal will include loaning Reyna back to the Bundesliga side, the 18-year-old having established himself as a regular with Dortmund this season, scoring three goals and providing four assists in 15 league starts.

The teenager also earned his first caps for the US national side in November’s internationals and scored his first goal at senior level with a free-kick against Panama.

The signing of both players would also offer an interesting narrative with the fathers of both Haaland and Reyna – Alf-Inge and Claudio – having previously spent time with Manchester City during their own professional careers.