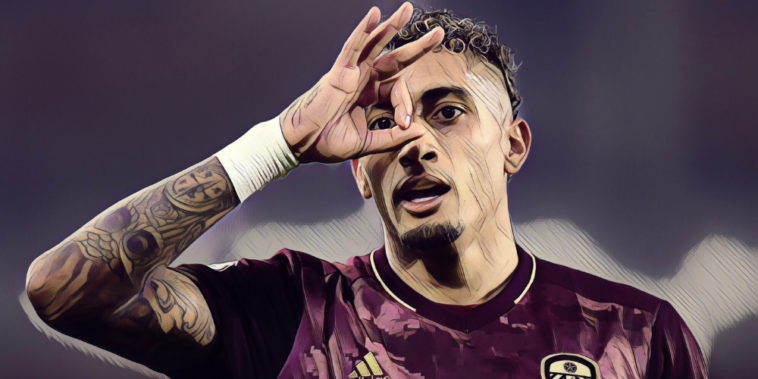 Manchester United are being linked with rivalling Liverpool’s interest in Raphinha, with the winger attracting interest following an impressive debut season with Leeds.

Raphinha signed for Leeds in a £17m deal from Rennes during the summer and has starred during the club’s return to the Premier League, scoring five league goals and providing a further five assists for Marcelo Bielsa’s side.

The 24-year-old was outstanding as Leeds moved into the top half with a 3-0 win over Southampton on Tuesday, continuing his fine recent form by scoring a superb free-kick to seal the win at Elland Road.

Raphinha’s performances this season have seen him linked with a potential move to Liverpool, as the Premier League champions consider adding to their attacking options during the summer window.

According to the Star, however, Manchester United could now rival the Reds for his signature as the club consider options for their problem position on the right-hand side of the attack.

United were linked with a move for Borussia Dortmund star Jadon Sancho last summer, though refused to meet the England international’s British transfer-record valuation given the financial impact of the coronavirus pandemic and could now move for Raphinha as an alternative.

The Brazilian’s creativity and versatility have made him a viable option ahead of the summer transfer window and the winger could link up with former Sporting Lisbon teammate Bruno Fernandes at Old Trafford.