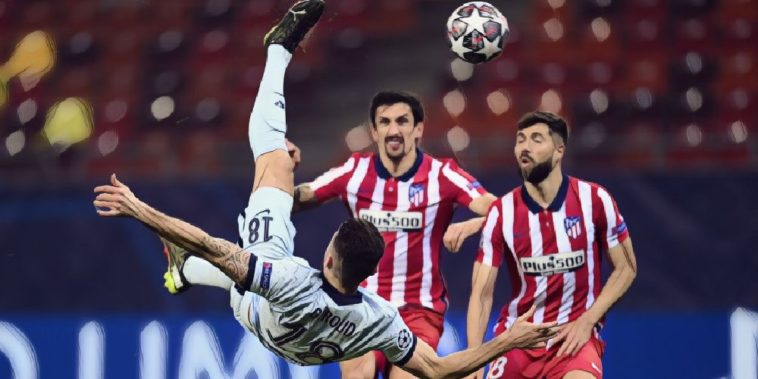 Olivier Giroud’s Chelsea career has looked over a number of times, but the Frenchman just keeps coming back. His crucial winner against Atletico Madrid was another reminder that he isn’t finished just yet.

“If you see him on a daily basis, you cannot be surprised. He is totally fit, his body is in shape and his physicality is on top level” explained Thomas Tuchel following Giroud’s winner on Tuesday evening. “He trains like a 20-year-old, like a 24-year-old. He is a guy who has a good mixture of seriousness and joy in training. He is always positive and it is a big factor for the group.”

After a long VAR check, the referee confirmed the Frenchman’s 68th minute winner stood. It was an instinctive and quick finish, full of imagination and precision. The 6ft 4in tall striker flung his whole body into the air and executed a fantastic bicycle kick, giving Jan Oblak no chance in the Atletico net.

It was a wonderful goal, crowning an important win for Chelsea, and maybe it is now time for supporters to stop being surprised when Giroud delivers. After a career in England in which his obvious limitations are often thrown at him, he seems to always answer with brilliant and quite often crucial goals.

Giroud signed for Chelsea, from rivals Arsenal, for £18m in January 2018. Following the departure of Diego Costa, Giroud acted predominantly as back-up to Alvaro Morata. After having just spent six months at the Emirates behind Alexandre Lacazette, and then being replaced by Pierre-Emerick Aubameyang, it was clear the former Montpellier man didn’t come over to Stamford Bridge to sit on the bench.

Ever since then, despite a desire from managers to move away from the veteran frontman, one by one, Chelsea coach after Chelsea coach have turned back to Giroud to find their centre-forward solution. And Thomas Tuchel could be next.

Maurizio Sarri was the first to resort to the Frenchman in his hour of need. The Italian, who joined from Napoli, brought his Naples centre-forward with him – Gonazalo Higuain. The Argentine flattered to deceive, and looked like a player way past his best, struggling to adapt to the Premier League.

Cue the introduction of a striking stalwart. Giroud’s return to the starting XI that season, ignited a successful end to the campaign, ending with a Europa League final victory in which he played a significant role against his former side – Arsenal. He finished the season as Chelsea’s top European goalscorer, condemning Higuain to a regular spot on the bench.

Frank Lampard was next, unable to resist the consistent presence up top the strong physical frame of Giroud provides. Having wedded himself to a commitment to youth, the rookie coaches patience with academy graduate Tammy Abraham wore thin in the second half of the season, and Giroud came into the side to go on a goal-scoring run that would ensure Chelsea secured a top-four position in the league. In only 12 league starts under Lampard in the 2019/20 season, Giroud notched an impressive eight goals.

Now, he seems to be doing it all over again. Tuchel has been rotational with his team selections since his arrival at the Bridge a month ago, as he searches for the right blend in a team full of talent.

At centre-forward Tammy Abraham has struggled, while Timo Werner is consistently in the team, but plays off the left-hand side more often than not. The central striker spot is up for grabs and Giroud did his case no harm with his acrobatic Champions League finish.

Most Champions League away goals this season:

Needs to start out next few games. pic.twitter.com/pcSGdZqCnI

The World Cup winners position in the squad will not just influence his club ambitions. In November, when the No.18 was finding minutes hard to come by, France head coach Didier Deschamps was clear in his need for his number one centre-forward to play more:

“Olivier knows it – the situation he’s in today cannot drag on forever. Before March he will have to find another situation than this one.” Deschamps said.

A January move away looked possible a few months ago, with Giroud obviously determined to retain his place in the side that won the World Cup with him at the point of attack, only two years ago. It is now looking more likely he will have the opportunity to prove his worth in West London.

Next up for Chelsea is two crucial league matches in their hunt for a top-four finish. The games against Manchester United and Liverpool can provide Giroud with a further chance to cement his place in the side. And with Werner and Abraham not pulling up any trees, he will be the favourite to start through the middle of the attack.

At 34 years of age, Giroud just continues to deliver. Throughout his time at Arsenal, he was valued, but his lack of pace was always directed at him as a reason behind the Gunners’ failure to reach the next level.

Similarly at Chelsea, supporters have felt reluctant to pin too much hope on a player that doesn’t threaten in behind. But his lack of pace may be the greatest contributor to the longevity of his career. His lack of reliance on speed, dynamism and physical capacity mean that he is not declining as some strikers do heading into their early 30s do.

Morata, Higuain, and Abraham have all fallen victim to the powers of Olivier Giroud. This season, as Tuchel tinkers to find the right formula, you wouldn’t bet against the Frenchman being central to the former PSG bosses plans.

Continually put down, constantly written off, Giroud is coming back once more.