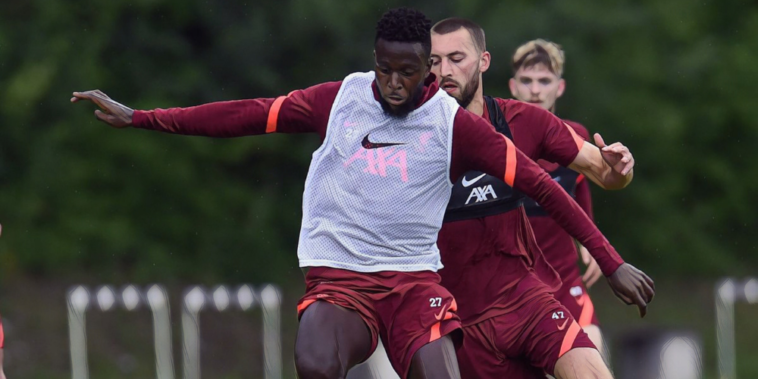 Liverpool need to offload fringe players before new additions can be made following a quiet transfer window of activity to date.

Ibrahima Konate’s arrival from RB Leipzig has been the club’s only significant addition of the summer so far and further business before the closure of the transfer window is set to depend on outgoings at Anfield.

The arrival of Konate and return of Takumi Minamino from a loan spell at Southampton leaves Liverpool with 17 non-homegrown players on their books, the maximum permitted by both UEFA and the Premier League with eight home-grown players taking the squad size to the permitted 25.

The additions of further players will now depend on whether the Reds can move on fringe players, with the Liverpool Echo reporting that Divock Origi and Xherdan Shaqiri are the most likely departures amongst the club’s non-homegrown contingent.

Both players have struggled to command regular first-team football in recent seasons and the latter has been linked with Lazio in recent weeks.

Nat Phillips shapes as another potential departure with the defender facing a fight to retain his place given the arrival of Konate and returns from injury of established stars including Virgil van Dijk, several Premier League sides said to be monitoring the 24-year-old ahead of a potential move.

Liverpool have already secured the sales of Marko Grujic and Harry Wilson to Porto and Fulham respectively, whilst Taiwo Awoniyi has completed a move to Union Berlin after a loan spell with the Bundesliga side last season.

The departures of that trio have raised around £29m in funds for further recruitment, though space will need to be found in the squad before potential incomings arrive in the coming weeks.

Liverpool have been linked with a whole host of midfielders in recent weeks following the departure of Gini Wijnaldum, with the like of Saul Niguez, Houssem Aouar and Youri Tielemans all named as players of interest, while Jurgen Klopp is also believed to be a fan of West Ham’s Jarrod Bowen as he looks to add more depth to his forward line.