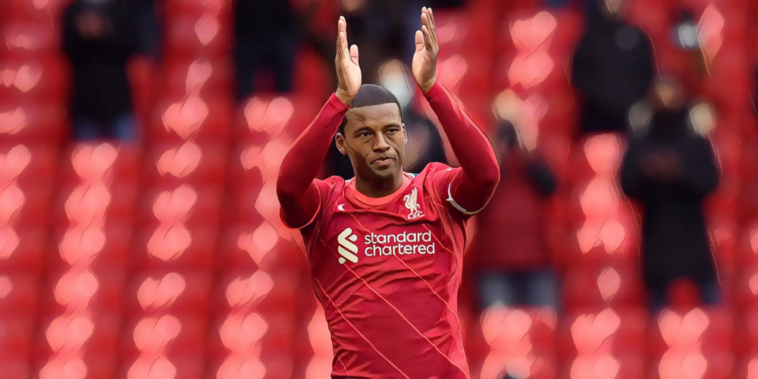 Georginio Wijnaldum’s departure from Liverpool has left a sizeable void in Jurgen Klopp’s midfield, the Netherlands international having been an almost ever-present in the Reds’ engine room over the past five seasons.

The 30-year-old has since signed for Paris Saint-Germain on a free transfer after being unable to agree terms over an extension on Merseyside, with Liverpool having since been linked with a whole host of names as the club seek a potential replacement.

We’ve decided to look at five of the most prominent midfield players to be linked with a move to Anfield this summer.

Youri Tielemans name has been a regular in the gossip columns in recent weeks, with Liverpool reportedly interested in signing the Belgium international from Leicester.

Tielemans has flourished since making the move to the Premier League with the Foxes on an initial loan deal in 2019, becoming an integral part of the side that has pushed hard for Champions League qualification in each of the past two campaigns.

Any deal for the 24-year-old would not come cheap amid reports of a £64m asking price for the midfielder, though the statistics weigh favourably in a move for Tielemans being a sensible move for the rebuilding Reds.

Tielemans and Wijnaldum both featured in all 38 league matches for their respective sides last season, though it is the Belgian who comes out on top when delving into several midfield metrics.

Tielemans bettered his counterpart for ball recoveries, passes attempted, tackles made, take-ons completed and interceptions per 90 minutes in the Premier League in 2020/21, whilst his lower pass accuracy (81.71% compared to 92.71%) can perhaps be attributed to Tielemans averaging almost double Wijnaldum’s number of forward passes per 90 minutes (20.5 compared to 10.4).

Premier League proven and with room to improve further, Tielemans shapes as a potentially fine addition to the Liverpool ranks should the Reds be able to finance the move.

Recent reports have suggested Liverpool’s priorities are in strengthening their forward line amid Africa Cup of Nations commitments for Sadio Mane and Mohamed Salah in 2021/22, so much could yet depend on the ability to raise further funds through player sales.

Renato Sanches’ performances at Euro 2020 have catapulted the midfielder back into the consciousness, the 23-year-old having rebuilt his reputation at Lille following a difficult period at Bayern Munich.

Tipped for superstardom after being named as Euro 2016’s Young Player of the Tournament and a high-profile move to Germany, it’s been a far from straightforward road for Sanches, but he now appears ready for a second chance at one of Europe’s elite.

Sanches blend of technical and athletic qualities make him tailor-made for English football despite a disappointing loan spell at Swansea as a teenager, whilst his powerfully combative game – averaging 5.7 ground duels won per game in Ligue 1 last season – and dynamism could add a different option to the Liverpool midfield.

Sanches averaged 2.9 take-ons completed per 90 minutes in 2020/21, comfortably outperforming Wijnaldum and also interestingly a figure higher than both Naby Keita and Alex Oxlade-Chamberlain – two players often tasked as being the link-men between the Reds’ midfield and front three.

The Portugal international – who has also been linked with Arsenal and Tottenham – has reportedly informed the French champions he is ready to leave this summer and with Lille keen to balance the books a deal could be struck.

Fabrizio Romano this week told his YouTube channel that the fee being demanded for Sanches is €30m (£25m), a figure that looks more than reasonable given the player’s ability and potential ceiling.

Atletico Madrid are reportedly prepared to allow Saul Niguez to leave the club this summer, sparking somewhat of a scramble for his signature with both Liverpool and Barcelona understood to be amongst the front runners.

Saul came through the academy ranks in the Spanish capital and has been a key part of the club’s recent success, his honours including last season’s La Liga and the Europa League.

Ready for a new challenge after falling slightly out of favour last season, the subsequent arrival of Rodrigo De Paul from Udinese is set to further reduce his chances and Atletico are reportedly seeking a fee in the region of €50m (£43m) for the 26-year-old.

Saul differs in style to the more diligent Wijnaldum in possession, but bettered the Netherlands international for forward passes, tackles and interceptions per 90 minutes in 2020/21 league action.

The Spain international’s left-footedness would also offer a different dimension and balance to the midfield, whilst his versatility – featuring in central and wide roles in addition to more defensive roles last season – could see Saul represent a two-in-one replacement with utility man James Milner set to turn 36 next season.

Liverpool are relatively well-stocked in midfield even without further additions this summer, but there may never be a better chance to sign Saul than in the current window.

Jurgen Klopp is understood to have been left impressed by the performances of Aston Villa’s John McGinn, with the Liverpool manager having allegedly asked Andy Robertson about his Scotland teammate following the Reds’ shock 7-2 defeat at Villa Park last season.

McGinn’s endless energy would make an ideal stylistic replacement for the often indefatigable Wijnaldum, whilst like the aforementioned Saul he could provide left-footed balance to the midfield three.

The 26-year-old averaged more ball recoveries, tackles made and interceptions per 90 minutes than Wijnaldum last season, with his eagerness to regain possession shown with 12 yellow cards in 2020/21 – the highest figure in the Premier League.

McGinn also ranked seventh amongst all Premier League players for pressures, his 649 higher than any Liverpool player and an indication of how he would fit in Klopp’s counter-pressing style.

Last season saw McGinn provide a greater goal threat than Wijnaldum with eight goal involvements in comparison to just two for the Dutchman, though the former is undoubtedly provided greater freedom to venture forward with Wijnaldum a regular goalscorer in a more advanced role at international level.

Villa’s owners are both wealthy and ambitious however, meaning any deal for McGinn would come at substantial cost should an offer arrive from Merseyside.

Yves Bissouma has informed Brighton of his desire to leave the club this summer with the midfielder subject of interest from several of the Premier League’s biggest clubs.

Transfer talk surrounding the Mali international has lessened in recent weeks, though Manchester City, Tottenham, Arsenal and Liverpool have all been mentioned as admirers of the 24-year-old’s talents.

Bissouma has improved hugely across three seasons in the Premier League and enjoyed a brilliant 2020/21 campaign, ranking second in the division for tackles and tackles won, whilst sitting seventh for interceptions.

Such is the star’s prolificacy in regaining possession, his 3.1 tackles made and 1.9 interceptions per 90 minutes rank higher than any of the aforementioned players on this list, with Bissouma perhaps the best like-for-like replacement for Wijnaldum amongst this quintet of options.

Brighton are currently in talks to sell Ben White to Arsenal and are prepared to sell their leading names should big offers arrive, Bissouma set to command a fee in excess of £30m should the Premier League’s elite come calling.