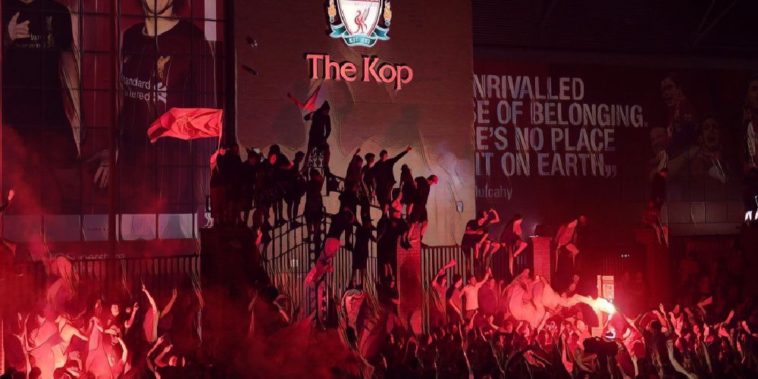 The widespread disobeying of instruction to stay at home by Liverpool and Leeds fans has reportedly raised ‘serious questions’ over the safety of proposals to reintroduce football fans into stadiums next season.

Plans are being considered to allow a phased reintroduction of supporters to football next season, but the midweek scenes at Liverpool and Leeds – celebrating their Premier League and Championship title successes respectively – has led to major doubts over whether fans ‘could be trusted to follow strict social-distancing rules during games’.

According to the Telegraph, football safety officers are ‘opposed’ to proposals that would see stadiums reopened at limited capacity, with John Newsham, a consultant for the Football Safety Officers Association (FSOA), describing the prospect of maintaining social distancing measures in grounds as a ‘nightmare’.

The Sport Ground Safety Authority last week revealed initial guidance plans for social distancing inside of sports grounds, with their list of recommendations including avoiding close contact with those outside of your bubble, remaining in your seat wherever possible and avoiding face-to-face contact when moving past other supporters.

Leeds have come under added criticism for allowing fans who disobeyed instruction to stay at home to congratulate the players via an open-top bus, though the club insists the bus had been put on standby as a measure to ‘assist dispersal should a crowd congregate’.

Newsham described the appearance of the players via an open-top bus as a ‘mistake’ and says the scenario ‘should not have been sanctioned by the Safety Advisory Group’, while Leeds District Police revealed four arrests for public order offences were made, and that officers were forced to wear protective equipment due to missiles being thrown.

The scene was markedly different in Liverpool, where Merseyside police issued a dispersal order to the crowds that congregated outside of Anfield. There had, however, been nine arrests for affray, assault, drunk and disorderly behaviour and drug driving.

Liverpool released a statement expressing their disappointment with the scenes outside of the club’s stadium, before thanking those who adhered to social distancing guidelines.

The statement read: Liverpool Football Club would like to thank those supporters who stayed at home to celebrate the team lifting the trophy last night (Wednesday), protecting their loved ones and our city from the ever-present threat of this pandemic. We are, however, disappointed with the scenes outside Anfield last night and that more supporters did not heed the celebrate at home advice.