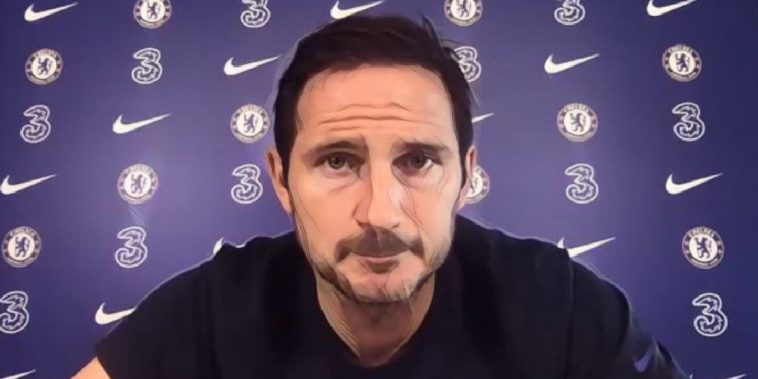 Frank Lampard has reflected on his first year in charge of Chelsea and admits he has been frustrated by the club’s ‘errors’ during an ‘eventful’ season at Stamford Bridge.

Lampard will celebrate a year in charge of the west London side tomorrow and his debut campaign has been largely positive, the club well placed to secure a top four finish and into the semi-finals of the FA Cup.

Ahead of this weekend’s clash with struggling Watford, Lampard has assessed his first season in charge and admits he is looking forward to the prospect of bringing silverware to the club in the coming seasons.

“It certainly has been eventful and proud to be doing,” Lampard said at his pre-match press conference. “It feels like a long time ago but it has flown by. The experience has been a great one. There is a lot of work to do. I am focused on the next years ahead.

“There are always lots of little things. The result doesn’t always mirror the way you play. I look at the way we work and I look forward rather than back.”

Chelsea‘s hopes of securing Champions League football were however dealt a blow with a shock 3-2 derby defeat at West Ham in midweek, the Blues’ defensive frailties once again evident as Andriy Yarmolenko scored a last-minute winner for the struggling Hammers.

Lampard was disappointed with his side’s play at both ends of the pitch, criticising their lack of creativity and the individual errors which led to the West Ham goals.

“It is a team fighting for their lives and while we had a lot of the ball we didn’t create enough,” the former midfielder said. “We gave them individual errors that handed them goals. The errors which led to the goals are something we can’t do.”

Lampard spoke further on the ‘errors’ which have cost his side vital points so far this season, though says there have been more positives than negatives during a campaign that has been blighted by inconsistencies.

“It’s frustrating because I have talked about both ends of the pitch,” he continued. “There aren’t many times where it has been more negative than positive. It’s something we have to put right if we want to get up the table.”

Marcos Alonso was heavily criticised this week following his role in Yarmolenko’s winner at the London Stadium, with Sky Sports’ pundit Gary Neville blasting the Spaniard for his lack of work-rate in tracking back to goal.

Lampard refused to single out the 29-year-old despite the disappointing defeat, but warned his side they must show desire to work hard at both ends of the pitch.

“Full-backs have a responsibility to do both. It wouldn’t be quite fair to isolate Marcos in that moment, the players have to have the desire to run backwards as much as they run fast forwards.”