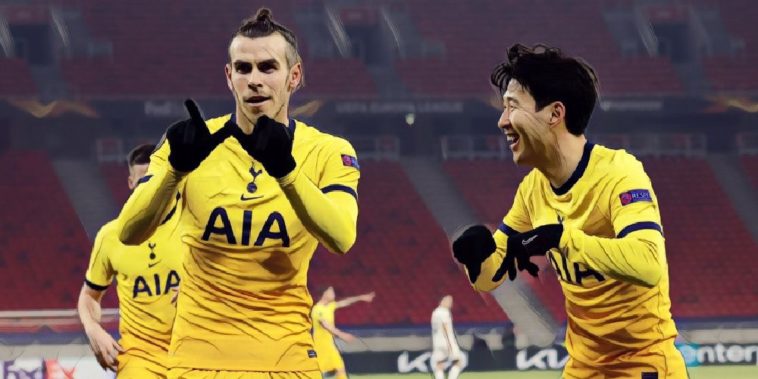 Tottenham Hotspur put one foot in the last 16 of the Europa League with a comfortable 4-1 over Wolfsberger, a game played in Budapest’s Puskas Arena.

Jose Mourinho’s side were in poor form coming into this game, losing five of their last six games in all competitions before Thursday’s trip to Hungary.

Spurs would, however, take the lead in the 13th minute, Matt Doherty playing the ball into Gareth Bale, the much-criticised Welshman putting in a first-time right-footed cross into the middle with Heung Min Son reacting quickly as he stooped to head his side ahead.

Spurs doubled their advantage just before the half-hour mark, and once again it started with Doherty playing the ball down the right channel to Bale. Instead of getting a cross in though, the 31-year-old turned to get back onto his left, before lashing past ‘keeper Alexander Kofler with a venomous finish.

Six minutes later and it was three, Lucas Moura scoring a superb solo goal as the Brazilian picked the ball up on the left, drove at the Wolfsberger defence, beating three men, before confidently slotting past Kofler.

The Austrian outfit did however pull one back 10 minutes after the break, Michael Liendl netting from the spot after Moussa Sissoko brought down Christopher Wernitznig following a sloppy loss of possession.

Spurs would eventually restore their three-goal advantage as three of their subs combined, Pierre-Emile Hojbjerg crossing the ball into Erik Lamela, the Argentine nodded it into the path of Carlos Vinicius who tapped home from close range.

Speaking afterwards, Jose Mourinho was pleased to see his side display ‘ambition’, admitting his side are ‘almost’ into the next round ahead of next week’s return leg.

“We had to come and play with ambition which we did,” he told BT Sport. “The score should have been more than 3-0 at half-time.

“In the second half we made that mistake that gave them life. There were some similarities with Everton. If you’re in control and make a mistake you give the opposition life and the game can change. In here it didn’t change. But the 3-2 was not far from happening.

“We had good control of the game. Lots of chances. I believe the last goal put almost a period on this tie. 4-1 away is a very good result.”

Next up for Spurs is a London derby against an in-form and high-flying West Ham at the London Stadium.