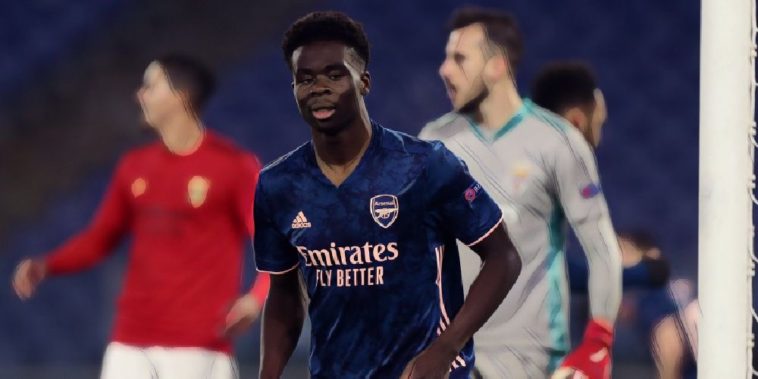 Arsenal were held to a 1-1 draw in their Europa League last 32 first leg tie against Benfica in Rome’s Stadio Olimpico.

The Gunners enjoyed domination for large spells of the match in the Italian capital, though, despite that, they struggled to regularly test Benfica ‘keeper, Helton.

Arsenal had an excellent chance to take the lead after just 18 minutes, Hector Bellerin getting down the side of the Benfica defence, putting the ball on an absolute plate for Pierre-Emerick Aubameyang, only for the weekend’s hat-trick hero to inexplicably put his effort wide of the post from six yards.

Bukayo Saka had dragged an early second-half chance wide from the edge of the box, and within minutes, they were made to pay for their profligacy.

The Portuguese side were awarded a penalty after Emile Smith Rowe was adjudged to have handled the ball inside the box at a corner, with 31-year-old striker Pizzi stepping up to net his sixth Europa League goal of the campaign.

Arsenal weren’t behind for long though, Martin Odegaard slipping a lovely ball through the Benfica defence into Cedric Soares, the full-back squaring it to Saka who made no mistake with his close-range finish in what was a well-worked goal.

On the whole, though, the Premier League side really struggled to break down Jorge Jesus’ side, with Aubameyang in particular guilty of missing a number of chances, the game finely poised ahead of next week’s second leg, the Gunners holding a slight advantage thanks to Saka’s away goal.

10+ – Since the start of last season, Bukayo Saka (19y 166d) is the youngest Premier League player to have reached double figures for goals (10) and assists (16) across all competitions. Hope. pic.twitter.com/cQMN2bOKvx

Speaking afterwards, Mikel Arteta rued his side’s wastefulness and the manner in which they went behind.

“We were very dominant and created some big chances. We have to be more ruthless,” he told BT Sport.

“It was disappointing the way we conceded the goal. We gave them the ball then it was 1-1 and all to play for.

“We conceded a corner then from the corner we did not react quick enough and conceded the penalty. Looking at it it’s difficult to judge. We had a great reaction and scored a great goal.

“We tried to maintain the level. Both teams dropped in the last 20 minutes. But overall we should leave the ground with more.”

Next up for Arteta’s side is a tricky game against Premier League leaders Man City, before the return leg against Benfica next week, which will take place in the Greek capital, Athens.