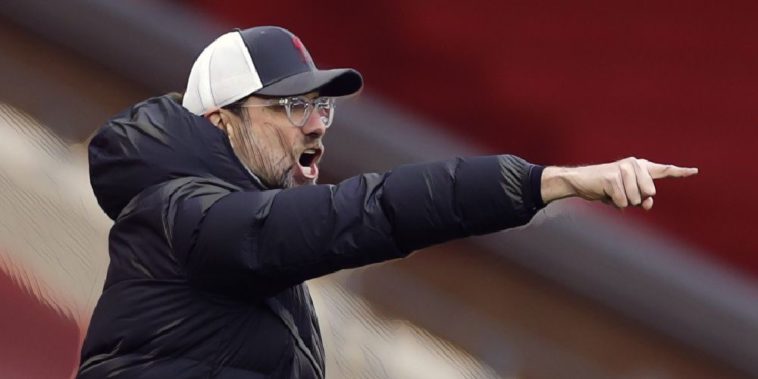 Jurgen Klopp admits he is ‘not surprised’ by the Premier League’s big-spending sides as he compares Liverpool’s lack of transfer activity this summer.

Liverpool have made just one significant signing this summer with the capture of Ibrahima Konate from RB Leipzig, with the deal for the defender secured early in the window following last season’s defensive injuries.

That sale has been balanced by a handful of departures of fringe players including Harry Wilson and Marko Grujic, with the club’s net spend so far sitting at less than £10 million.

In comparison, Chelsea and Manchester City have both broken their transfer records with the captures of Romelu Lukaku and Jack Grealish respectively, whilst Manchester United have invested more than £100m in the signings of Jadon Sancho and Raphael Varane.

Klopp has discussed the differences between the Reds’ finances and those of their title rivals, insisting that Liverpool must continue to work within their means as the club seek to improve.

“February 2020 the pandemic started, nobody knew how long it would last, I was hoping of course that it would be over in a month. Now we know so much more about it and it’s still a difficult time. It was for football clubs as well, for different reasons,” he said at his pre-match press conference.

“I’m not surprised [that other teams have spent big], because these clubs don’t depend on this kind of thing, I think. We all know the situations at Chelsea, City, PSG. What’s happening at United, I don’t know – I don’t know how they do it.

“We have our way and it’s always been the same since I joined. We can spend, we’re allowed to spend the money we earn – that’s what we always did.

“This year we spent before we earned money with Ibrahima Konate, because after last year it became clear that we couldn’t take any risks in this position at all. That’s our situation.”

Liverpool have instead focused on securing the futures of key personnel during the current window, sealing new contracts for the likes of Trent Alexander-Arnold, Fabinho, Alisson and Virgil van Dijk.

Klopp believes that business represents ‘great news’ for his side’s pursuit of further success, even if it is not as ‘spectacular’ as the summer business of the club’s Premier League rivals.

“I’m never surprised about the financial power of City, Chelsea or United,” he added. “I’ve been in the country long enough to know they always find a solution to do these things.

“For us, it’s our way. We keep the team together, that’s important as well. I know it’s not as exciting as signing new players.

“People think that if you don’t sign, you don’t work – that’s not the case. We are constantly thinking short term and long term – what can we do? How will the team look this year and next? I know it’s not as exciting, but if you’re a real Liverpool fan you’re excited about the news the club delivered in the last few weeks – Allison’s new contract, same with Trent Alexander-Arnold, Fabinho and Virgil Van Dijk. Others will follow, so that’s great.

“It’s not as spectacular but it’s great news – if other teams wanted to sign these players they’d have to pay a lot of money and we have them already. We have a good squad together and are in a better situation than we were last year. Let’s try to build on that and see where we end up.”