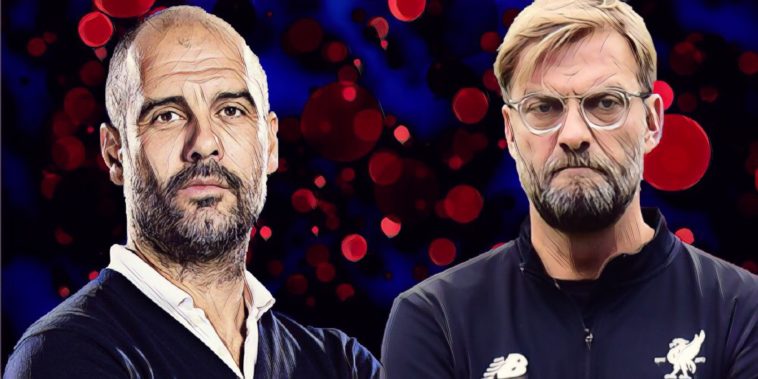 Pep Guardiola and Jurgen Klopp are two of the world’s leading managers and their Man City and Liverpool sides have been the dominant forces in English football over the past few seasons.

Guardiola and Klopp prepare to face off once more this Sunday in a clash that will have a massive bearing on this seasons Premier League title race.

Ahead of today’s clash at Anfield, we take a look back at five of the best games between Guardiola and Klopp teams:

Guardiola’s first competitive match in charge of Bayern was a breathless encounter with Klopp’s exciting Dortmund team, the German emerging triumphant in the first meeting between the pair.

Bayern were the reigning European champions having won the treble under Jupp Heynckes the previous season, beating Dortmund in the Champions League final at Wembley, but it was Klopp’s side who exacted their revenge in a ruthless attacking display.

Marco Reus scored twice for Dortmund, either side of Daniel van Buyten’s own goal and Ilkay Gundogan’s strike. Arjen Robben’s brace was of little consolation for Guardiola, who missed out on a first piece of silverware as Bayern boss.

An early encounter in the 2017/18 season saw Guardiola’s City ruthlessly exploit a feeble defensive performance from Liverpool, Sadio Mane’s first-half red card the turning point in a thrashing at the Etihad.

Sergio Aguero had opened the scoring for the hosts despite an impressive start from Klopp’s side, however, Mane’s 37th-minute dismissal for a high boot on City goalkeeper Ederson changed the game.

Gabriel Jesus scored a brace either side of half-time to put City in a commanding position, before Leroy Sane’s late double gave City their biggest win over Liverpool since 1937 and sent an ominous warning to the rest of the Premier League.

The reverse fixture saw City head to Anfield in January still unbeaten in the Premier League, comfortably clear in the title race and amidst talk of matching Arsenal’s 2003/04 feat of completing an invincible season.

Alex Oxlade-Chamberlain opened the scoring for Liverpool early on, before Leroy Sane’s equaliser saw the game level at half-time. In the second half, Liverpool blew City away in a whirlwind nine-minute spell.

Liverpool capitalised on individual errors from John Stones and Ederson, goals from Roberto Firmino, Sadio Mane and an audacious lob from Mohamed Salah putting the hosts three goals ahead.

Klopp’s side wobbled and survived a late scare, goals from Bernardo Silva and Ilkay Gundogan setting up a nervy finish. Liverpool held on to boost their top-four hopes, inflicting City’s first league defeat of the season.

Having ended City’s hopes of an unbeaten season, Liverpool and Manchester City were paired together in the Champions League quarter-finals and faced off on Merseyside once again in the first leg.

In a raucous Anfield atmosphere, Liverpool thrashed City to take a firm grip on the tie, scoring three times in the first 31 minutes to leave Guardiola’s City shell-shocked.

Mohamed Salah opened the scoring before Alex Oxlade-Chamberlain’s thunderbolt doubled the lead, Sadio Mane netting a third to put Klopp’s side in a commanding position.

Bolstered by the January signing of Virgil van Dijk, Liverpool preserved their clean sheet on a famous European night. They would win again in the second leg at the Etihad, in a campaign which would see them reach the first of successive Champions League finals.

After a summer of heavy investment, Liverpool had emerged as genuine contenders to City’s Premier League crown and began the 2018/19 season with a 20-game unbeaten league run.

Guardiola’s City had wobbled over the festive period, and ahead of the meeting with Klopp’s side at the Etihad trailed their Merseyside rivals by seven points.

Nothing but victory would do for defending champions City, and they nearly fell behind as John Stones desperately scrambled the ball off the line to keep the tie goalless.

Both sides had chances to win the tie, but it was City who found a vital winner. Leroy Sane firing home with just 18 minutes remaining, handing City a huge boost in the title race.

Guardiola’s side had moved to four points behind Klopp’s Liverpool, a margin they would eventually close to win the title by just a single point.