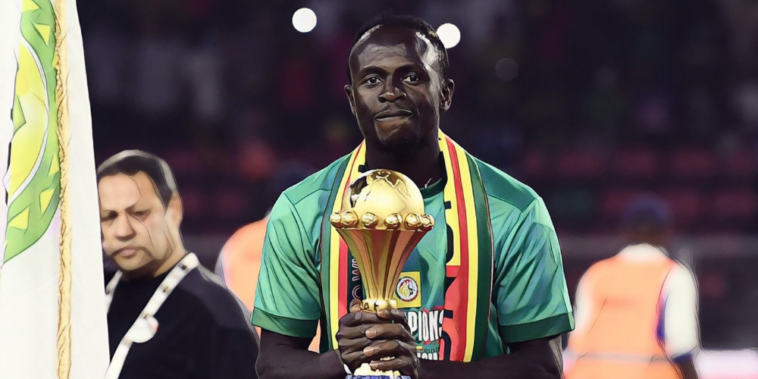 Mane emerged victorious as Senegal were crowned as the continent’s finest for the first time, scoring the decisive penalty in the shootout success over Salah’s Egypt in Cameroon.

There was a touching moment in the aftermath of Senegal’s success, as Mane – who was named as the Player of the Tournament – was pictured consoling his Liverpool teammate.

Speaking ahead of Liverpool’s clash with Leicester on Thursday evening, Klopp admitted the AFCON final was a ‘strange’ occasion to watch with his loyalties divided.

“It was a strange game to watch, to be honest, from an emotional point of view,” Klopp told the Liverpool club website. “I obviously wish them the best, the very best, in absolutely everything [but] it was not possible in this game.

“So, Mo couldn’t make it but played a really good tournament and Sadio made it and yes, now I have to say really congratulations, outstanding. I saw some pictures from Senegal, what it meant to them directly after the game. Obviously, it’s the first time in their proud history they could win the AFCON and [an] absolutely outstanding achievement.

“The pressure on Sadio with missing the penalty in the game and then the last one… wow! I cannot imagine how he would have felt. But you could see the joy and relief after that so he was obviously in the best possible shape.

“We have text a little bit here and there but he is still in Africa, still in Senegal, celebrating and we will see – Wednesday night or something like that we will send him out. But yes, it was obviously a big tournament and meant the world to him.”

Salah has since returned to Merseyside following Egypt’s final defeat, with the 29-year-old understood to be keen on being involved against the Foxes this week.

Klopp says the Reds will assess Salah ahead of the clash, having seen the forward play four consecutive 120-minute games with each of Egypt’s knockout fixtures going into extra time.

“I spoke to him and pretty much the first thing Mo told me was: ‘I’m ready.’ Haha!” he said.

“He is an experienced player, he is a physical monster, to be honest, so we have to see. He will obviously have a little recovery session today and we will see how he feels tomorrow and from there we go.

“The proper plan we don’t have, play him as often and as long as possible is probably the plan, but we will not rush it. But if he is fine we will not leave him out for the wrong reasons as well, so let’s see.”

Asked if Salah could be involved against Leicester, Klopp said: “Yes, yes. Sadio no chance as he’s not even here, but Mo, yes.”

Klopp confirmed that Mane will not return ahead of the Leicester game, with the Liverpool boss keen for the star to soak in the celebrations after Senegal ended their long wait for AFCON success.

“Sadio flies out if it’s possible on Wednesday night, so will arrive here on Thursday but he is, of course, then not involved in the Leicester game.

“They’ve had an incredibly intense time, so when he is back we will talk to him and we will see how we can use him.”