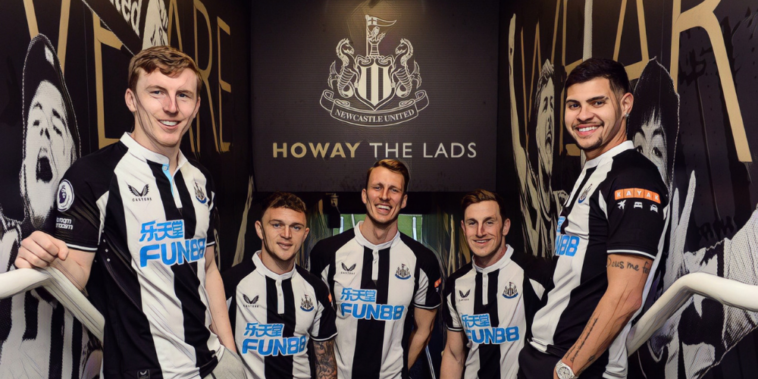 The midweek fixtures include some fascinating clashes at both ends of the division, with Newcastle’s new signings out to make an impression against a rejuvenated Everton now under the guidance of Frank Lampard.

Manchester City will hope to maintain their lead at the top against Brentford, whilst second-place Liverpool take on former manager Brendan Rodgers and Leicester at Anfield.

Elsewhere Watford will hope the appointment of Roy Hodgson can improve their fortunes, whilst Manchester United, Spurs and Arsenal all face crucial contests in the race for the top four.

Here are eight talking points ahead of the midweek Premier League action.

West Ham running out of steam?

West Ham’s push for a top-four finish has been doubted based on the club’s strength in depth, with the Hammers still competing on multiple fronts despite boasting less resources than the side’s around them.

Having suffered back-to-back league defeats before the international break, a rotated side needed a stoppage-time equaliser – and the arrivals of senior names from the bench – to ensure FA Cup progression at non-league Kidderminster on Saturday.

Are recent results a sign of fatigue? David Moyes said the club came ‘close’ to deals in January without being able to secure new additions, with the failure to sign a centre-back and centre-forward perhaps set to prove costly in their chase for Champions League football.

Michail Antonio’s return from international duty will be a welcome boost ahead of Tuesday’s clash with struggling Watford, a game that looks a must-win to restore confidence and keep the Hammers in contention for the top four.

New signings set to be thrown in at the deep end

Newcastle and Everton were two of the busier Premier League clubs in January, each entering the market to strengthen after disappointing starts to the campaign.

The Magpies were predictably the division’s biggest spenders following their billionaire takeover earlier in the season, with Eddie Howe set to be able to call on late window arrivals Matt Targett, Dan Burn and marquee arrival Bruno Guimarães against Everton on Tuesday.

Everton also secured much-needed additions in midfield after sealing deadline day deals for Donny van de Beek and Dele Alli, though each were cup-tied for the weekend win over Brentford as Frank Lampard got off to a perfect start.

Lampard will be tempted to throw both in for what shapes as a crucial clash at St James’ Park, with just four points currently separating 19th-place Newcastle and an Everton side bidding to remain clear of the relegation places.

A win for either side could be a huge result in their season.

Ralf Rangnick’s post-match analysis of Manchester United’s FA Cup exit to Middlesbrough retained a semblance of positivity, insisting there have been signs of improvement from the Red Devils of late despite their early elimination to the Championship side.

There is no hiding that the loss was a huge blow to the club’s hopes of a successful campaign, however, with the FA Cup having offered the most realistic avenue to ending a barren run without silverware this term.

Ralf Rangnick: “If Man United have not won the title in the last 10 years, there must be some good reasons for that”. 🔴 #MUFC

“Everybody on the inside of the club would be happy if we finish fourth at the end of the season – and me too”. @utdreport pic.twitter.com/eLimJjPwen

United travel to face Burnley on Tuesday and attentions now turn towards their league results, with Rangnick’s side mired in what looks set to be a tight race to secure Champions League football.

A failure to finish in the top four and secure a return to Europe’s elite could prove disastrous, and would leave an incoming permanent manager with an even greater task to attract names and restore the side to former glories.

Mahrez can be key in City’s challenge

Even given the wealth of talent at Pep Guardiola’s disposal, the return of Mahrez is a major boost with the winger having been in fine form this season.

Mahrez is City’s leading scorer in all competitions and has scored 15 goals from just 18 starts, averaging better than a goal involvement per game when factoring in his five additional assists.

Riyad Mahrez shining on his return to City 💫 pic.twitter.com/9AJIbtvkCK

The 30-year-old created one and scored twice in the weekend win over Fulham at the Etihad and will be relishing the chance to take on a Brentford side who have struggled on the road in recent weeks.

With the likes of Jack Grealish and Raheem Sterling having endured inconsistent periods this season, Mahrez has shown he can be relied upon when it comes to goalscoring output for a City side continuing to thrive without a recognised forward.

Harry Kane has praised the impact of Antonio Conte at Tottenham this season, with the forward having put behind him the struggles of the season’s opening months to find his form in recent weeks.

The saga surrounding a potential move to Manchester City and his summer exploits with England had clearly impacted the 28-year-old, but he now appears fitter and more content than at any previous period of the season.

Kane has scored seven goals in his past 10 appearances in all competitions for Spurs, including a double as the North Londoners moved into the FA Cup’s fifth round at the weekend.

We still can't get over this @HKane strike 🤯@SpursOfficial #EmiratesFACup pic.twitter.com/s4z3ne9Zu0

With Son Heung-Min back in the side and the club’s creative options enhanced by the January arrivals of Rodrigo Bentancur and Dejan Kulusevski, Kane will be confident of maintaining his purple patch around goal.

Spurs – who have lost just once in the Premier League since Conte’s arrival in November – face Southampton on Wednesday, a side Kane has scored 11 goals in just 13 league appearances against.

Liverpool’s weekend win over Cardiff was pleasing for Jurgen Klopp as his side reached the FA Cup’s fifth round for just the second time during his reign at Anfield.

There was an encouraging debut for Luis Diaz following his arrival from Porto last month, whilst the return of Harvey Elliott – in which the teenager scored his first goal for the club – will have delighted the Reds’ boss.

With Mohamed Salah and Sadio Mane returning from AFCON excursions, Liverpool now boast an abundance of options and Elliott’s return from the horror injury sustained at Leeds in September is another welcome boost.

Returning to the side in style 👏💎 pic.twitter.com/BYy0XCytau

The 18-year-old started the season in superb form as he seized his chance in the first team, adding guile to the club’s midfield three and forming a fine understanding with Salah and Trent Alexander-Arnold down the right.

With the likes of Curtis Jones, Alex Oxlade-Chamberlain and Naby Keita having failed to truly convince as the link between the midfield and forward line, Elliott’s return to the side can add a new dimension to Klopp’s team as Liverpool continue to compete on four fronts this season.

Arsenal’s failure to sign a centre-forward in January has been greeted with frustration from the fanbase, with the Gunners set to continue their push for Champions League football reliant on Alexandre Lacazette.

Lacazette has led the side in recent weeks and his selfless performances have won praise, but a return of just three Premier League goals this season is concerning, with Arsenal dropping vital points during a goalless draw with Burnley last time out.

Mikel Arteta’s side face Wolves on Thursday, a side who have shown defensive solidity under Bruno Lage and who can leapfrog the Gunners in the table with a win at Molineux.

"That’s my goal – every day to be the best man and the right man in the right place to take Wolves to better positions.”

Bruno speaks to the @PremierLeague after picking up his first manager of the month award.

Despite a disappointing FA Cup exit last weekend, Wolves have won their last three games and taken 13 points from the last 15 available, conceding just two goals in that time.

Roman Saiss’ return from international duty will strengthen Lage’s centre-back options further and Arsenal could face a huge challenge in breaking down one of the division’s best defences.

Norwich hoping to keep momentum ahead of tough tests

Norwich have found their groove under Dean Smith’s management, winning their last three fixtures in all competitions including an FA Cup win at Wolves at the weekend.

The Canaries failed to provide Smith with new additions during the winter window, but he getting more from the options at his disposal than predecessor Daniel Farke managed over the season’s opening months.

Having looked doomed earlier in the season, back-to-back Premier League wins have moved Norwich out of the bottom three and the club will be hoping to continue that momentum when Crystal Palace visit Carrow Road in midweek.

Palace have just one win from their past seven – a 3-0 win over Norwich on December 28 – and the Canaries will be confident of maintaining their winning run.

With fixtures against Manchester City and Liverpool in their next two, it could prove vital in maintaining their place outside the relegation places.