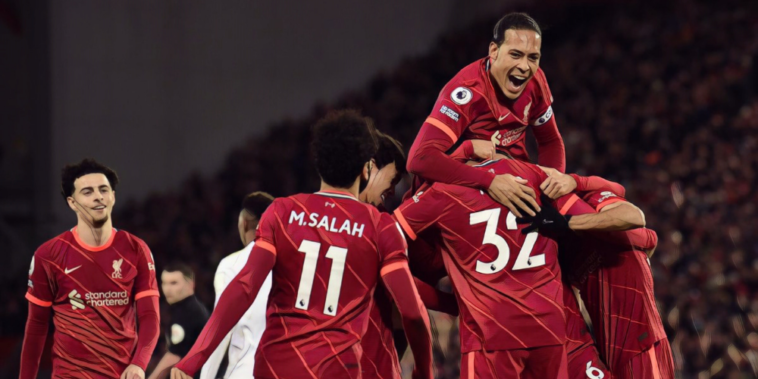 Jurgen Klopp admits he ‘didn’t expect’ Liverpool’s 6-0 rout of Leeds as the Reds moved within three points of Manchester City at the top of the Premier League.

Salah made it a brace from the spot before half-time, with a late double from Mane and Van Dijk’s stoppage-time header securing Liverpool’s biggest win of the Premier League campaign to date.

The win moves Liverpool within three points of league leaders City and with a superior goal difference, with attentions for the Reds now turning towards Sunday’s Carabao Cup final with Chelsea at Wembley.

Klopp was delighted with his side’s performance against Leeds and revealed his surprise at the convincing manner of Liverpool’s six-goal win at Anfield.

“It can happen,” he told Match of the Day. “If you are really on it and go through all the difficult spells in the game that we did but you think about the start. We had three days to prepare it and tell the boys how big the difference is between Leeds and the other teams.

“It can happen, but I didn’t expect it. It is really difficult to defend man marking against us for 90 minutes. You cannot defend Mo Salah in all challenges of a game. That is the problem Leeds has and that is why the result is the result.

“We have 10 days until we play the next league game and we have two games in-between in completely different competitions, one is a final and the other I don’t even know, a quarter-final or a last 16 and they will be different games and we have to be ready for them as well.”

Liverpool’s win closed the gap on Manchester City at the top of the division, the latter having dropped points after losing 3-2 to Tottenham at the Etihad last weekend.

Klopp has warned his side must win ‘all’ of their games in order to win the Premier League, however, before insisting Liverpool will do all they can to remain in the title race.

“It is three points until the weekend and then City will probably win and then it will be six points. If we win all our games pretty much there will be a chance for us.

“I think for people outside it is better to have a three or six point gap than to have a 20 or 30-point gap so it is more exciting but we have to win a lot of the games against all the difficult opponents and that will be a tricky task. We will give it a try.”