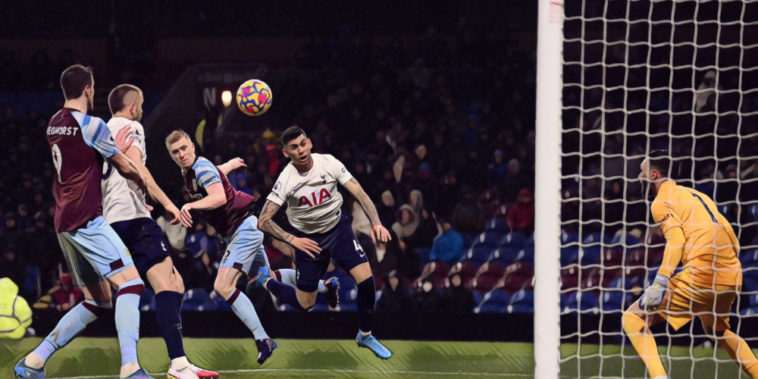 Antonio Conte has said his future at Tottenham should be up for assessment after the club’s hopes of securing a top four finish were dealt a huge blow following a 1-0 defeat at Burnley on Wednesday night.

Spurs had come into the game on the back of a pulsating 3-2 win over Manchester City at the weekend, but were brought immediately back down to Earth at Turf Moor.

Ben Mee headed home the only goal of the game in the second half as Burnley boosted their survival bid with a second successive Premier League win, rising at the back post to seal all three points for Sean Dyche’s side.

Harry Kane came closest for Spurs after hitting the crossbar, but Conte’s side were unable to build on last weekend’s thrilling win at City and have now lost four of their last five league fixtures.

A dejected Conte was asked about his side’s disappointing defeat and suggested that there needs to be an assessment by the club following his inability to turn their fortunes around.

“It was difficult tonight and not only tonight — in the last five games we lost four games,” he told Sky Sports.

“It means there will be assessment, assessment about the club, about me. The club has to make an assessment, also to speak together, to understand which is the best solution.

🗣️"There will be an assessment of the club, about me."

“In this situation, the players are always the same. In this club, they change the coaches. The players are the same but the result doesn’t change. I repeat.

Asked about his comments in the subsequent post-match press conference, he said he wasn’t prepared to close his eyes to the situation and simply collect his salary.

“Someone has to speak about the race for top four but the reality from the last four games is we have to not fight for the relegation zone.

“The reality is there’s something wrong. I don’t want to close eyes. I want to help Tottenham. I’m too honest to close my eyes and continue in this way, and also to take my salary. It’s not right at this moment.

“I want to try to improve the situation and also to make assessment with the club because if we continue in this way, maybe we have to pay great attention because this league we can finish 10th, 12th, 13th the same way that when I arrive here the same position.”