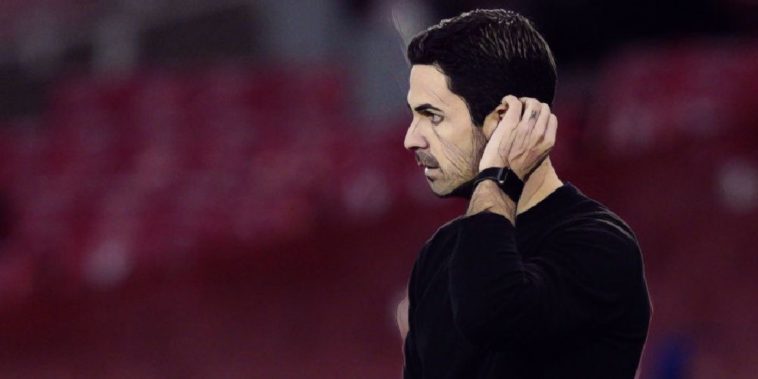 Martin Keown says ‘it’s going to be difficult’ for Mikel Arteta at Arsenal following the club’s ‘disastrous’ draw with Slavia Prague in the Europa League.

Arsenal‘s hopes of reaching the Europa League semi-finals were dealt a huge blow after conceding a stoppage-time equaliser to the Czech champions at the Emirates, the visitors scoring a dramatic away goal with just seconds remaining.

Nicolas Pepe had come off the bench to open the scoring just moments earlier, though Tomas Holes’ header rescued a draw for Slavia who will be confident of eliminating a third British side this season ahead of next week’s return.

Keown criticised Arsenal’s inability to ‘take the initiative’ and their lacklustre approach to the game, admitting the Gunners’ squad needs someone to ‘slap them’ before they ‘wake up and start to play’.

“For me it was about Arsenal tonight and the way they played. By sitting off they chose the wrong tactics,” Keown told BT Sport.

“There was an opportunity to take the initiative and ask questions, can you play? But they were allowed to settle and build from the back.

“In the first-half it became nervy and they weren’t the team we saw just a few weeks ago against West Ham for instance. It seems like Arsenal are not proactive in games, they need someone to slap them or punch them in the face before they wake up and start to play.

“He (Arteta) did it in the second-half with the substitutions but they couldn’t see it through.”

Slavia Prague have an away goal! 😳

In the closing seconds at the Emirates and Tomáš Holeš heads past Bernd Leno!

Keown believes the result makes things ‘difficult’ for Arteta with the pressure beginning to increase on the Spaniard, who has endured a disappointing first full season in charge after last season’s FA Cup success.

Arsenal currently sith 10th in the Premier League and are facing the prospect of a European exit, with Keown admitting the manager is not getting the right ‘reaction’ from his team following a ‘disastrous’ result at the Emirates.

“Hugely disappointing, it’s going to be difficult now for Arteta,” he said. “He’s made a lot of changes within the club, a lot of people have been allowed to go. There’s been a lot of problems for Arsenal across a number of years with players coming in and out.

“He’s in charge now and he’s not quite getting the reaction from the team. They’re making sloppy mistakes and it cost them. We expected them to do their talking on the pitch. It’s the same old story, Arsenal giving away goals. It’s a disastrous result but it’s not the end.”