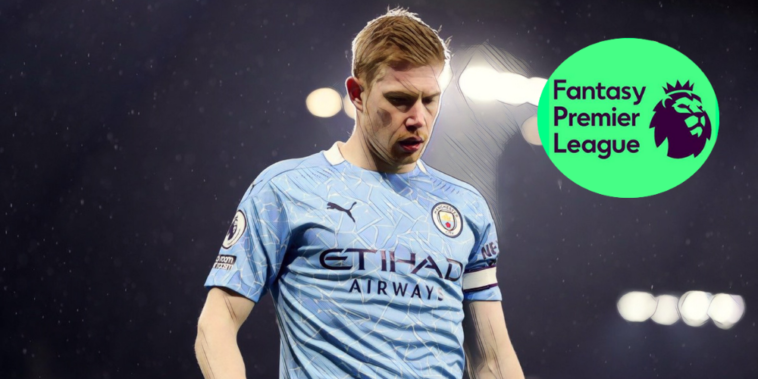 The finishing line is in sight for Fantasy Premier League managers as we gear up for gameweek 31, each selection potentially proving crucial to hopes of climbing up mini-leagues and overall rank.

This weekend’s Premier League fixtures include an intriguing clash between Tottenham and Manchester United, whilst West Ham host Leicester as two of the division’s top four go head-to-head at the London Stadium.

Ahead of what promises to be another fascinating round of fixtures, we’re on hand to offer our advice on which players to hand the crucial captaincy.

Here are four of the best FPL captains for gameweek 31.

Kevin De Bruyne appears to be hitting his stride ahead of the Premier League’s run-in, having produced a superb showing in Manchester City’s 2-1 win against Borussia Dortmund in the Champions League quarter-finals in midweek.

De Bruyne is often at the heart of his side’s best play and the visit of Leeds offers potential for point-scoring this weekend, the newly-promoted side having impressed this season but often coming unstuck against England’s elite.

Leeds have conceded 3+ goals in fixtures with Liverpool, Leicester, Tottenham, Arsenal and Manchester United this season, the latter a 6-2 thumping on their last visit to Manchester.

With just one clean sheet in their past five, the visit to the Etihad could prove another daunting experience as Pep Guardiola’s side close in on the Premier League title.

De Bruyne ranks first in the division for assists per 90, expected assists per 90 and shot-creating actions per 90 so far this season and will be central to City’s hopes of three points.

Liverpool’s lacklustre showing against Real Madrid in midweek will raise concerns amongst FPL managers, but Diogo Jota has undoubtedly made a difference to the Reds since his return from injury.

Jota scored the only goal of the game against former side Wolves in gameweek 29, before coming off the bench to score twice against Arsenal last weekend and haul 12 points.

Liverpool look a better side with Jota’s energy and goal threat in the front three and the Portugal international will hope to keep his place against an Aston Villa side with one clean sheet in five.

⏱️ Minutes per goal in @premierleague this season (minimum 3 goals):

Teammate Mohamed Salah offers an interesting alternative given his return to form in recent weeks, scoring four goals in his past three appearances for club and country, including his side’s goal in their 3-1 defeat to Real Madrid on Tuesday.

Southampton have been boosted by the return of Danny Ings with the forward excellent in last week’s comeback win against Burnley, scoring one and providing another as the Saints came from two goals down to seal three points.

Ings’ 11 points were his joint-best haul of the season and his underlying numbers indicate he can continue that momentum ahead of a trip to West Bromwich Albion this weekend.

Ings has been involved in a huge 46% of Southampton’s goals when he has been in the side this season, whilst he leads his teammates for shots and shots inside the penalty box this season despite spells on the sideline through injury.

The England international will be confident of finding the net once more against a West Brom side with the Premier League’s worst defensive record, the Baggies having conceded 59 goals in just 30 games so far this season.

Arguably the most in-form player in the Premier League right now, Jesse Lingard has proven a breath of fresh air since signing for West Ham on loan from Manchester United.

Lingard has scored six goals and provided three assists in just eight league appearances for Hammers, with only Harry Kane having scored more amongst all Premier League players since the midfielder’s West Ham debut.

The 28-year-old’s stunning solo goal helped David Moyes’ side to a 3-2 win over Wolves last time out, a result which lifted the Hammers into the Champions League places.

The visit of third-placed Leicester this weekend may not appear the most straightforward fixture on paper, but there are few players in the division playing with such confidence at present and few would bet against Lingard maintaining his fine form.

⚒️ Only Harry Kane has played a direct hand in as many Premier League goals as @JesseLingard (both 9) since making his West Ham debut at the start of February pic.twitter.com/W34EcKr5sr

Lingard has provided attacking returns in seven of his eight appearances for West Ham, including four double-digit hauls and scores of 12-points in both gameweek 29 and 30.