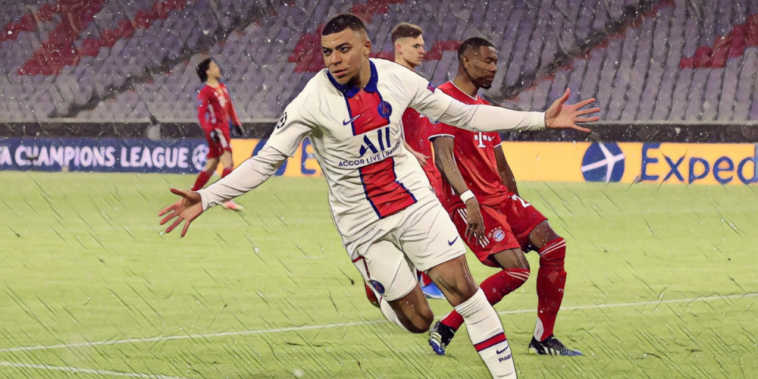 Manchester City left it late to secure a narrow advantage ahead of their return with Borussia Dortmund, whilst Liverpool have a mountain to climb after being outclassed by Real Madrid in Spain.

It’s better news for Chelsea however, who have one foot in the last four following a strong showing to win at Porto.

As he has so often done in recent seasons for PSG, Keylor Navas stood tall in the face of relentless pressure to help his side seal a thrilling 3-2 win against holders Bayern Munich in Germany.

The two sides played out a cagey final in last season’s competition with Bayern edging a narrow 1-0 win, but this was an all-time classic as two of the favourites went toe-to-toe at the Allianz Arena.

Bayern incredibly had 31 efforts on goal with 12 hitting the target, only to find Navas in inspired form as the Costa Rica international made a string of saves to deny the hosts.

10 – No other goalkeeper has made more saves than @PSG_English's Keylor Navas 🇨🇷 in a Champions League quarter-final game since at least 2003/04 (also 10 for Manuel Neuer 🇩🇪 against Real Madrid in 2017). Heroic. pic.twitter.com/giUNHCCsZc

The 34-year-old has been one of the Champions League’s leading goalkeepers in recent years and remains integral to PSG’s hopes of winning the trophy this season.

Unfortunate to find himself on the losing side, Pavard was one of the few Bayern defenders who stuck to his task against the irrepressible threat of PSG’s frontline, defending his flank well and contributing when venturing forward.

It was the France international’s pinpoint cross that allowed Eric Maxim Choupo-Moting to head Bayern back into the contest after the visitor’s raced into a two-goal lead, a moment of quality that could prove crucial in the holder’s hopes of turning round the tie.

Much was made about Real Madrid’s makeshift backline ahead of their quarter-final clash with Liverpool, the absence of Sergio Ramos and Raphael Varane leaving the 13-time winners without two of their most dependable figures.

Eder Militao’s move to the Spanish capital has proven underwhelming since his €50m arrival from Porto in 2019, with the centre-back having been linked with a move to Liverpool during the winter window in a bid to solve their defensive crisis.

Jurgen Klopp must have been left wishing his side had pulled off the deal after watching Militao nullify the threat of the Reds’ front three, the likes of Sadio Mane, Diogo Jota and Mohamed Salah restricted to almost watching briefs.

The 23-year-old will have to produce another strong showing ahead of next week’s return on Merseyside but showed he has the quality and temperament to thrive at this level.

John Stones bounced back from his England mishap with a performance more in line with the showings he has produced on a consistent basis for Manchester City this season, dealing with the formidable threat posed by a Borussia Dortmund side spearheaded by Erling Haaland.

Stones was afforded time in possession and stepped out confidently in signature style, comfortably the most composed of City’s backline when it came to dealing with Haaland.

The 26-year-old has now incredibly found himself on the winning side in 28 of his 30 appearances for club and country so far this season.

Recalled to the side ahead of Marcos Alonso at left wing-back, Chilwell showed the forward threat he can provide with a crucial goal to all but ensure the west Londoner’s place in the semi-finals.

Chilwell has admitted he is still adjusting to the demands of the more advanced position following Thomas Tuchel’s change in system at Stamford Bridge, but showed what he can produce with a marauding run forward to double Chelsea’s lead in Porto.

The England international defended solidly throughout before his potential tie-winning moment, capitalising on a defensive mistake to surge forward and round the goalkeeper before firing home for his first-ever Champions League goal.

Real Madrid’s midfield three were a class apart against Liverpool to ensure the Spanish giants remained in control of the contest, a monstrous performance from Casemiro added to by the technical talent of Luka Modric and effortless elegance of Toni Kroos.

Kroos was the dictator throughout as Real Madrid enjoyed a carousel of possession in the centre, the Red shirts left chasing shadows for much of the opening exchanges in the Spanish capital.

The 31-year-old ran the game and registered a pass completion of more than 90% for the eighth time in nine Champions League appearances this season, his finest completed pass a sensational long ball into Vinicius Junior to open up the Liverpool defence and assist the opening goal.

Joshua Kimmich and Jude Bellingham both deserve mentions for midfield roles despite finishing on the losing side for Bayern Munich and Borussia Dortmund respectively.

Typically at the heart of Manchester City’s best passages of play against Borussia Dortmund, Kevin De Bruyne stepped up once again for Pep Guardiola’s side as they secured a late 2-1 win at the Etihad.

De Bruyne drove forward from midfield superbly before finishing an attacking move to put City ahead, and capped another influential display with a wonderful delivery in the build-up to Phil Foden’s late winner.

It’s advantage Manchester City ahead of the return meeting in Dortmund and De Bruyne remains the key figure in the club’s hopes of finally conquering the Champions League.

Mason Mount’s status as Chelsea’s most influential player continues to grow with each passing week, the academy graduate delivering once more for the Blues to secure a 2-0 win at Porto.

Mount is enjoying a superb individual campaign and added another highlight to his growing list, opening the scoring with an exquisite turn and finish, leaving Zaidu Sanusi in the turf before firing beyond Agustín Marchesín into the far corner.

The 22-year-old is often praised for his endeavour off the ball but Mount is a player with a vast array of qualities and his performances of late have showcased just how influential he can be for club and country.

The pass, the swivel, the finish! 🔥

Chelsea’s Player of the Season and it shouldn’t even be close.

Paris Saint-Germain are an intriguing prospect for Champions League opponents, a side whose deficiencies make them appear beatable, but whose strengths make them a daunting prospect.

Mauricio Pochettino’s side showcased the best and worst of themselves in an enthralling clash with Bayern, one which saw the French champions concede a staggering 31 efforts on goal, yet emerge victorious courtesy of some scintillating attacking football.

In Neymar and Kylian Mbappe the Parisians have two players capable of winning games singlehandedly and each were at their irresistible best against the European champions.

The former sparkled as Bayern struggled to live with his fleet-footed magic, slipping in Mbappe for the game’s opening goal inside three minutes, before picking out Marquinhos for the second with a wondrous first-time delivery on his ‘weaker’ left side.

As usual he was subjected to some rough treatment from opposition defenders left frustrated in their attempts to stop him in his tracks, but that comes with the territory of being one of world football’s finest.

Vinicius Junior has blown hot and cold since signing for Real Madrid in a big-money deal, the teenager showing flashes of brilliance but remaining predictably inconsistent given his inexperience.

Real Madrid’s quarter-final clash with Liverpool was an evening in which the 20-year-old shone, however, tormenting Trent Alexander-Arnold with his pace and movement in the attacking third.

Alexander-Arnold has often struggled with long diagonal passes in behind and it was a tactic the Spaniard’s utilised in Madrid, Toni Kroos’ perfect pass finding the forward in behind to open the scoring.

Vinicius was bright, busy and showed the end product he has often been criticised for lacking, scoring a crucial third for the home side after finding space inside the box to fire past Alisson.

This was a real statement showing from a young player with huge potential and his match-winning display has given the Spanish champions a huge chance of reaching the last four.

Kylian Mbappe has often been touted as the man to replace Lionel Messi and Cristiano Ronaldo as the world’s finest footballer, but make no mistake the forward is a player for the here and now.

After his sensational hat-trick destroyed Barcelona in the previous round, Mbappe was once again the difference-maker as the reigning champions were 3-2 beaten in their own backyard.

The France international opened the scoring inside three minutes after firing through Manuel Neuer, before scoring the decisive winner with another fine run and finish through the defender’s legs.

Bayern were terrified of Mbappe’s mix of scintillating speed and skill throughout, his threat on the break ensuring some nervy moments for the home’s side defence.

Mbappe has matched Thierry Henry's tally for UCL KO stage goals (12) at the age of 22 🤯 pic.twitter.com/AtiG1FnUbN

Bayern managed to cope with the 22-year-old during last season’s narrow final win, but Mbappe was their tormentor-in-chief at the Allianz Arena on Wednesday and looks a player hell-bent on bringing Champions League success to PSG.